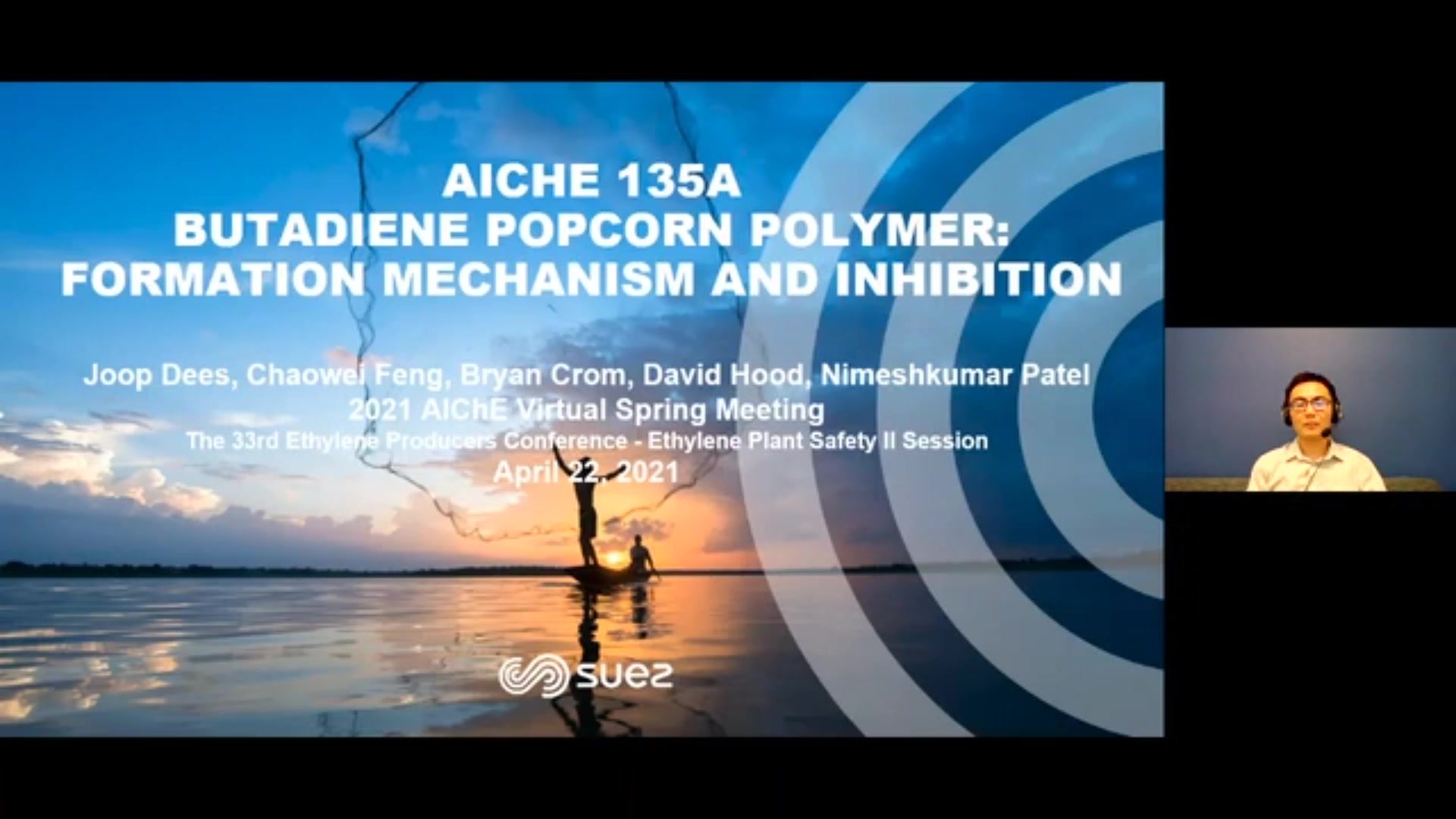 In olefin production, a porous crosslinked polymer like a â€œpopcornâ€ forms occasionally in the apparatus due to olefin polymerization in the step of refining/recovery. Popcorn polymer also occurs during monomer recovery in synthetic rubber production. Numerous monomers can experience the formation of popcorn polymers, including diolefins (e.g. 1,3-butadiene, isoprene) and olefins (e.g. styrene, vinyl acetate, acrylic acid). Popcorn is a unique form of polymer and presents significant hazards to industrial processes. For example, popcorn polymer fouls and adheres to the apparatus/pipelines in the refining/recovery systems including distillation tower and heat exchanger. This often clogs the pipeline/apparatus leading to the decrease of efficiency. In more serious cases, excessive growth of popcorn polymer can generate significant mechanical stress to deform or rupture the pipeline/apparatus, causing release of olefin vapors which can lead to plant fire or explosions.

Popcorn polymers can occur in either liquid phase or gaseous phase. It is commonly formed in presence of rust, oxygen, and reactive monomer (e.g. butadiene). Popcorn polymer formation basically consists of two stages. The first stage is popcorn seed formation through a series of transformation steps. The second stage is rapid seed growth into large polymer lumps in presence of monomer in a self-accelerated propagation rate. The growth rate increases with time exponentially due to newly formed radical actives sites or seeds caused by popcorn fracture during growth.

Current industrial practice to remove popcorn polymer fouling includes temporal suspension and disassemble of the apparatus for mechanical cleaning. This reduces the run length causing significant economic loss. More effective practice is to use process inhibitors. Initial formation of popcorn seed is usually slow. An inhibitor that can scavenge peroxide is potentially effective. Some inhibitors have been historically reported to limit the seed formation. On the other hand, popcorn seed growth is difficult to inhibit once it is formed. Conventional inhibitors are generally not effective in preventing seed propagation. Popcorn seeds, when formed, are very resistant to mechanical cleaning. Small amount of seeds then grows into large popcorn polymers even in presence of conventional inhibitors. Hence, inhibiting the second popcorn seed propagation stage is challenging.

In this paper, popcorn formation mechanism and inhibition chemistry that has been historically used in the industry to limit the seed/polymer occurrence along with their supporting literature is reviewed. Importantly, new compounds are studied for inhibiting popcorn polymer formation and show good performance. As such, these compounds can potentially help address the challenges brought by popcorn polymer.

Preview Presentation:
Presenter(s):
Bryan Crom
Chaowei Feng
Once the content has been viewed and you have attested to it, you will be able to download and print a certificate for PDH credits. If you have already viewed this content, please click here to login.

A Novel Approach for Design and Quantitative Risk Assessment for Hydrogen Refueling Station
In order to move towards further commercialization of the Hydrogen economy, it is essential to minimize the associated safety concerns and maximize the...
Tutorial on Combustible Dust
Recent catastrophic dust explosions, the combustible dust National Emphasis Program (NEP), and OSHA proposed rulemaking, have increased awareness of...