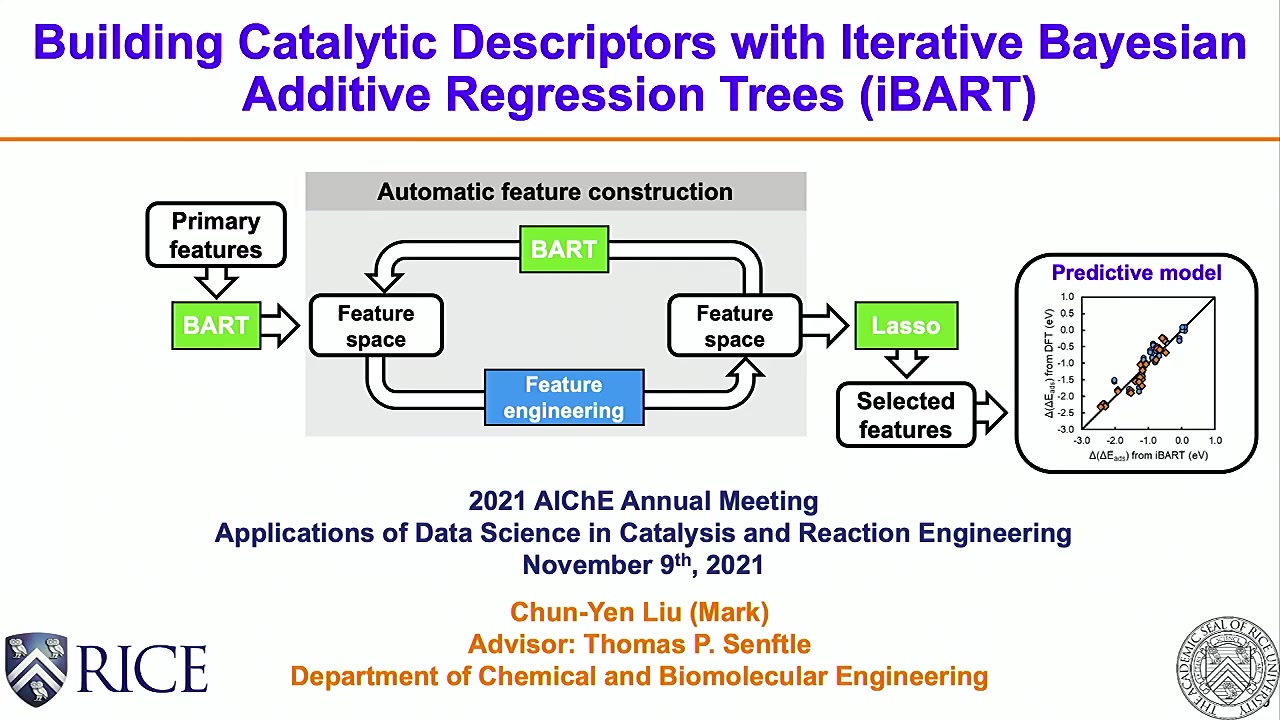 Catalyst design can be accelerated by finding physical descriptors that predict the adsorption strength of molecules and atoms on metal and metal-oxide surfaces. These descriptors can be constructed from physical intuition when the systems under investigation are relatively simple, when only one physical phenomenon dominates the interaction between the surface and the adsorbate. However, it becomes increasingly difficult to design such descriptors in complex systems when multiple phenomena influence the interaction between the adsorbate and the surface. Take for example the binding energy of a metal atom and an oxide support, which is a critical metric for controlling the supported metalâ€™s cluster-size distribution, sintering rate, and stability. This interaction is influenced by several charge transfers occurring between the metal, the oxide surface, surface defects (e.g., vacancies or heteroatom dopants), and adsorbates from the reaction environment. This complexity cannot be captured by simple physical descriptors derived from chemical intuition alone. This issue can be addressed with statistical learning (SL) techniques that apply feature engineering (FE) and feature selection (FS) to build complex descriptors, as shown in our previous work [1-2]. These studies demonstrate the capabilities of various state-of-the-art methods for FS, yet we found that these methods tend to suffer from two critical deficiencies. First, the FE procedures generate highly correlated feature spaces that challenge weaknesses in typical FS techniques (e.g., LASSO). This leads to higher error and an earlier onset of overfitting. Second, the FS methods require significant computational resources to handle the large features spaces that are necessary for constructing features with sufficient complexity. In this work, we developed a new FE and FS methodology, called iterative Bayesian additive regression trees (iBART), to address these issues. iBART reduces the size of the candidate feature space from millions/billions to hundreds without sacrificing feature complexity, which accelerates the computational speed and lessens the required system memory. We applied iBART to derive metal/oxide binding energy descriptors from our previously published data [1-2], and the results demonstrate that iBART improves descriptor accuracy and significantly reduces computational expense.

Preview Presentation:
Presenter(s):
Meng Li
Chun-Yen Liu
Thomas Senftle
Shengbin Ye
Once the content has been viewed and you have attested to it, you will be able to download and print a certificate for PDH credits. If you have already viewed this content, please click here to login.

The Effect of Residence Time and Heterogeneous Catalysis on Continuous Hydrothermal Liquefaction of Food Waste
The United States releases a significant amount of methane through the decomposition of waste in landfills; methane is a greenhouse gas with a global warming...
Electrochemical Biomass Upgrading: Degradation of Glucose to Lactic Acid on a Copper (II) Electrode
Biomass upgrading, the conversion of biomass waste into value-added products, provides a method to reduce global dependency on nonrenewable resources. Among...