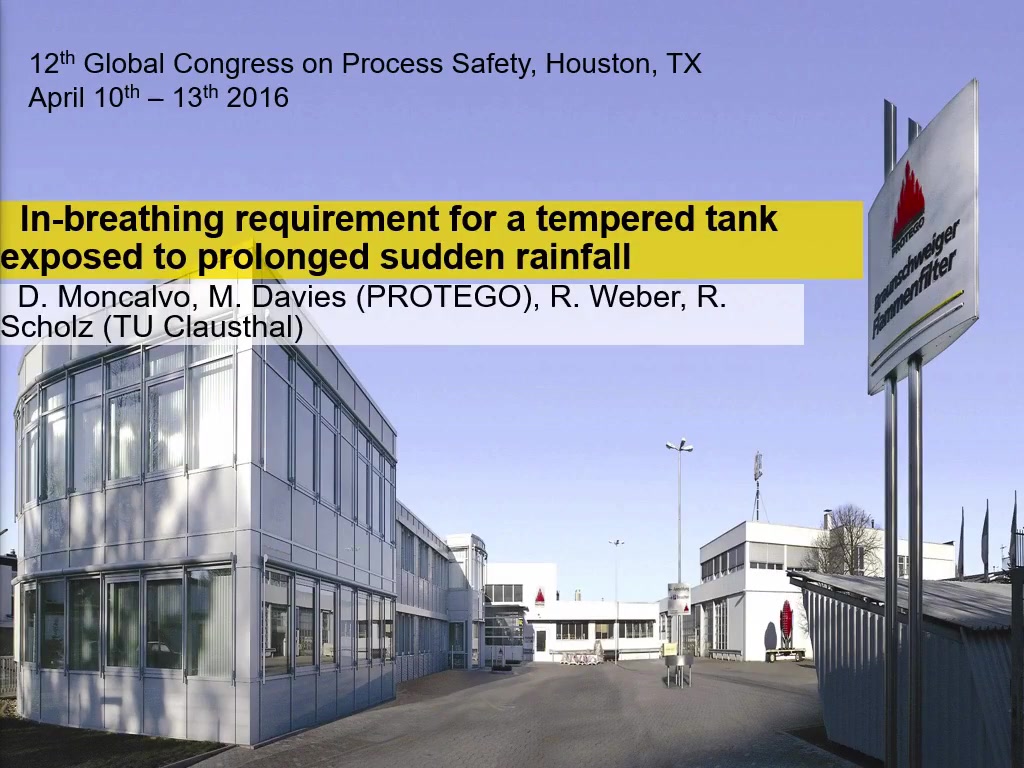 Low-pressure storage tanks are normally large tanks, which contain huge amounts of product within thin walls, typically made by one metal sheet. Low- pressure tanks, especially if uninsulated, may be subjected to rupture after prolongued solar exposure in hot summer weather as well as to vacuum collapse due to intense rain showers. (Out-) In-breathing capacity is the amount of (gas product) air, which must be flowing (out from) into the tank in order to avoid tank collapse.

The models for thermal in- and out-breathing in the actual version of the standards API 28300, EN 14015 and ISO 28300 were derived from the models of Förster et al. (1984) at PTB Institute in Germany applied to air tanks under specified solar heating and rainfall cooling scenarios, which are acceptable as worst-case in the European and North American continents. The models in the cited standards work successfully for out-breathing of tanks exposed to uninterrupted solar irradiation, where usually modest liquid evaporation occurs. However, more recent works pointed out that the models must be improved to estimate the in-breathing requirement in tempered tanks exposed to prolonged rainfalls. The authors believe that one of the main deficiency of the methods in the standards is the lack of consideration for the mass phase change mechanisms between the walls and the contact liquids, being condensation of vapor on the internal wall surface and rain evaporation on the external wall.

In this paper the authors are presenting a rigorous thermodynamical model coupled with mass balance at the near-wall areas in order to have a more close account for the heat and mass transfer mechanisms on both wall sides. In order to validate the proposed methodology, a series of tests will be soon started with a small thin-walled API 12F tank, where the mass transfer effects - and consequently the wall temperature drop - should be more pronounced. A first set of tests with a commercial PN16 vessel filled with hot air in April 2015, aiming to be a precursor to the actual research, showed a non-negligible rain film evaporation at the beginning of the water pouring. Tests involving pure hydrocarbons, like methanol or ethanol, in tempered tanks are planned to be performed before the meeting. Future extension of this test program, for instance to binary mixtures, will be discussed next. Future work should also include a discussion on the advantages of using numerical tools for this research purpose and a guide to the selection of the proper tool.

Preview Presentation:
Presenter(s):
Davide Dr. Moncalvo
Once the content has been viewed and you have attested to it, you will be able to download and print a certificate for PDH credits. If you have already viewed this content, please click here to login.

Ventdef – a New Engineering Model for Vented Gas Deflagration Based on NFPA 68 (2018)
Hydrogen production and storage equipment is often located inside confined enclosures such as containers or buildings. Deflagration vent panels are one of the...
Hydrogen as an Energy Carrier
This course seeks to give the student an overview of hydrogen as an energy carrier, its current usage in industry, and current practices of producing,...