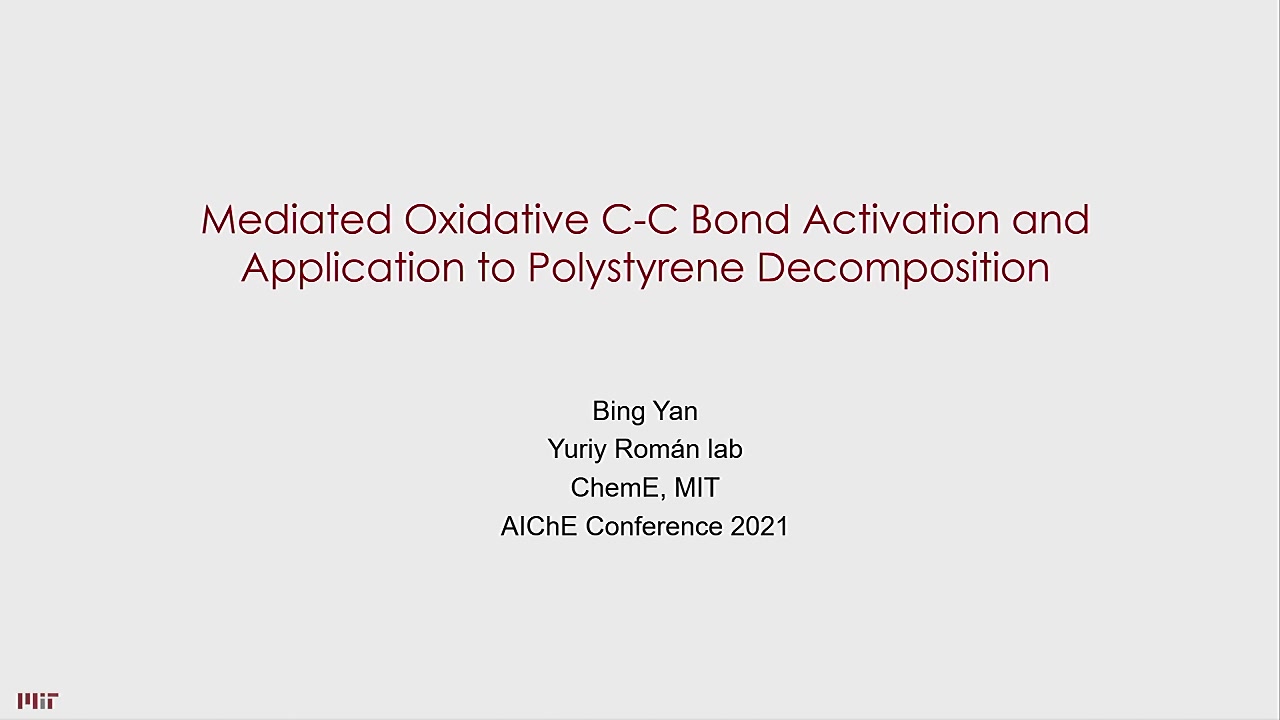 The selective cleavage of carbon-carbon (C-C) bond is central to plastic deconstruction and biomass valorization.1â€“4 However, the inertness of the Ïƒ C-C linkages hinders the selective and energy-efficient depolymerization and upcycling of polyolefinic plastic waste.5 The activation of Ïƒ C-C bonds is challenging due to several thermodynamic and kinetic constraints,6 including high bond dissociation energies (BDEs) of ~90 kcal molâˆ’1,6 steric inaccessibility caused by surrounding C-H bonds, and unfavorable orbital directionality towards cleavage requiring the rotation of two carbon sp3 orbitals.7Except for a limited number of cases where Ïƒ C-C bond scission is facile such as strained molecules, and structures that introduce aromaticity upon cleavage,6,7 most Ïƒ C-C bonds do not fall into these special categories and necessitate more aggressive reaction conditions for activation. For example, thermochemical pathways used for plastic depolymerization, such as pyrolysis and thermal cracking, operate at temperatures > 400Â°C and suffer from low product selectivity.8 Alternatively, oxidative C-C bond cleavage produces oxygenates as valuable chemicals,2 but have low environmental factors, urging the development of new oxidative schemes.

Electrocatalytic oxidation presents a promising approach to activating and cleaving inert Ïƒ C-C bonds under mild conditions.9â€“11 During direct electrooxidation, the substrate is activated at the electrode to generate intermediates or products (Figure a).1,12 While simple, oxidizing inert molecules in this setup often requires highly anodic potentials where side reactions, such as solvent oxidation, can occur. On the other hand, a redox-active species can be used to mediate the process indirectly by first undergoing oxidation at the electrode, then selectively oxidizing the substrate of interest in solution, and lastly regenerating at the electrode to start the cycle over (Figure b). Since the mediator is designed to undergo rapid electron transfer at the electrode surface, a significantly lower oxidation potential is necessary to drive the conversion. Furthermore, mediators can be engineered to react with the substrate selectively, thus eliminating many side reactions.

Here, we employ a mediator, N-hydroxyphthalimide (NHPI), that is readily oxidized at a carbon electrode into the phthalimide-N-oxyl (PINO) radical.13â€“15 PINO is highly adept at benzylic C-H hydrogen atom abstraction to return to its reduced form, NHPI, and complete one catalytic cycle. The resulting benzylic carbon radical is susceptible to further oxidation (e.g., in the presence of molecular oxygen) to form a peroxide species that decomposes into oxygenate products (Figure b). This indirect, mediated approach for Ïƒ C-C bond cleavage reduces the oxidation potential by 1.26 V compared to the direct oxidation of the substrate (Figure c), thereby eliminating deleterious side reactions, such as solvent oxidation, that may occur at high potentials.

Studies with a bibenzyl model compound revealed a branched reaction pathway following the initial HAT step, which leads to either C-C bond cleavage products such as benzaldehyde and benzoic acid, or C-H oxygenation products such as 1,2-diphenylethanone and benzil (Figure d). We have optimized the bulk electrolysis conditions and have studied the effects of NHPI quantity, NHPI substituents, basicity, electrolyte type, solvent, O2 partial pressure, temperature, and oxidation current. The optimal reaction conditions suppress the self-decomposition of PINO and maximize the conversion of bibenzyl to 61.0% with a selectivity of 38.4% to C-C bond cleavage products and a selectivity of 39.2% to C-H bond oxygenation products.

Next, we investigated the C-C bond cleavage of polystyrene (PS) oligomers with an average molecular weight of 510 Da. With oxidation, the starting oligomers were completely converted into oxygenates, with a yield of 77.8% for monomers and dimers (Figure e). Similar to the model compounds, the oxidation is initiated by HAT and followed by C-C bond cleavage.

As a proof-of-concept, we employed NHPI to mediate the oxidative depolymerization of high molecular weight PS (average Mw = 9,500 Da). GPC results confirmed that PS was successfully broken down into shorter-chain products via C-C bond cleavage (Figure f). The yield of monomers and dimers reached 12% after 4.29 electrons were transferred to each styrene unit in average.

The NHPI-mediated oxidation strategy demonstrates the great potential of electrocatalysis in activating inert chemical bonds under mild conditions. Given the wide variety of redox mediators, this study opens the door to employing renewable electricity and targeted redox mediators to catalyze challenging chemical transformations. Future studies will focus on engineering the redox mediator to improve its stability in order to boost the conversion and yield of C-C bond cleavage products. Additionally, strategies to immobilize the redox mediators onto a support or to develop heterogeneous mediators will facilitate the product separation and purification processes, especially for large-scale applications.

General electrochemical methods. Experiments were conducted using a Gamry Interface 1010B potentiostat. Electrochemical measurements were performed in an H-shaped three-electrode electrochemical cell with a Nafion membrane separating the working and counter compartments. 0.1 M LiBF4, 0.1 M pyridine and 0.1 M acetic acid (HOAc) acetonitrile solution served as the electrolyte unless otherwise stated. The bulk electrolysis was performed in constant current mode. For all experiments, a leakless Ag/AgCl electrode was used as reference electrodes. All experiments were performed at ambient temperature, (21 ± 1 °C), except for the reaction temperature optimization experiments. Preview Presentation:
Presenter(s):
Gregg T. Beckham
Eugene Y.-X Chen
Yuriy Roman
Changxia Shi
Bing Yan
Once the content has been viewed and you have attested to it, you will be able to download and print a certificate for PDH credits. If you have already viewed this content, please click here to login.

Intensified Reaction Processes
This online course provides learners with a basic understanding of process intensification (PI) principles applied to reaction processes and spans the topic...
2-Dimensional Zeolites: Synthesis, Adsorption, Transport, Catalysis and Stability.
I will review our contributions in 2D-MFI membranes and catalysts starting from our early work on oriented membranes and crystal morphology control (Science...