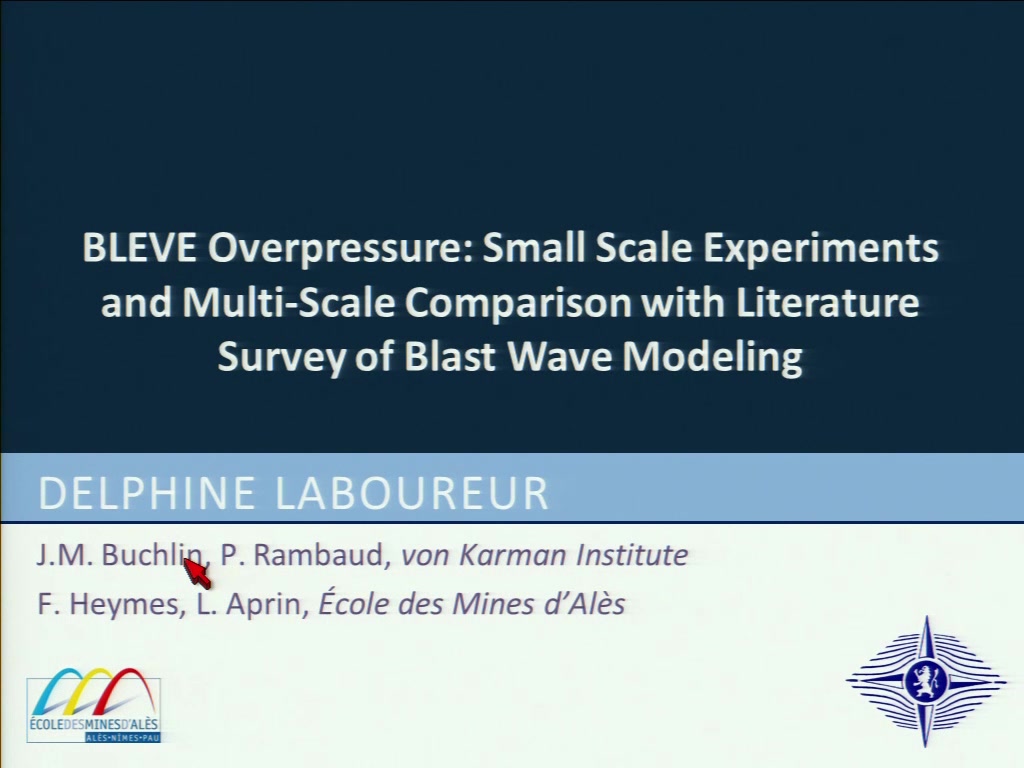 The most dangerous accident that can occur in storage of liquefied petroleum gas (LPG) is the boiling liquid expanding vapor explosion (BLEVE). The BLEVE is defined as an explosion resulting from the failure of a vessel containing a liquid at a temperature significantly above its boiling point at normal atmospheric pressure (CCPS 1994). BLEVE accidents appear mostly when the tank is engulfed in fire. The heat increases wall temperature and internal pressure and induces wall-thinning and/or formation or fissures. The vessel then fails; vapor is ejected and the pressure drop caused by the rupture is superheating the liquid that boils rapidly and violently. This rupture generates a blast wave and if the liquid is flammable, it could ignite and form a fireball.


BLEVE hazard modeling can be divided in three parts, corresponding to the three major consequences of BLEVE: fireball formation and evolution, blast wave generation and fragment projection. Looking more deeply in the blast wave models, diverse methods have been proposed in literature to estimate the overpressure caused by explosions. Most of them are based on the determination of the BLEVE expansion work from the change of thermodynamic state of the fluid stored in the vessel. It is also considered that only a part of this expansion work is producing the blast wave, varying with the model. This quantity is then used to calculate the Sach's scaled distance, linked to the distance from the source and the atmospheric pressure. The peak side-on overpressure or the positive impulse can then be finally evaluated thanks to scaled overpressure or impulse curves (CCPS 1994, CPR 14E Yellow Book 1997). A similar procedure based on the TNT equivalent mass is also followed in other models.

A certain number of overpressure models have then been developed based on this approach; TNO 1997, Prugh 1979, Casal 2006, Genova 2008, etc… All the authors propose a new formulation of the expansion work, sometimes correlated to overpressure measurements, but no comparison of the different models has been made yet. The objective of the paper is then to collect experimental data from literature for comparison with the different models. But as the literature is quite poor concerning measurements of blast wave from BLEVE, small scale experiments were performed.

A dedicated facility called BABELs has been built and is available since beginning 2010 at the von Karman Institute, to guarantee secure small scale experiments in a calm and uniform environment. BABELs is an acronym for Bleve And Boilover ExperimentaL setup and consists of a cylindrical chamber of 2000mm diameter, and 3000mm high, with round-shaped flanges, made out of steel with a rated pressure of 0.5 MPa. It has 3 series of 7 optical accesses with a diameter of 150mm, separated by 90°, and a door of 570mm x 770mm. The setup allows air venting through openings in its bottom and upper parts, the last one being ended by an exhaust vent that can be used after each test to remove smoke or gas from the chamber. A ladder and a circumferential walking area are located at mid-height for better accessibility of the upper optical accesses.

Small scale experiments are performed with cylinders of 42g of propane, laid horizontally and heated from the bottom by an electrical resistor. A weakening of the reservoirs on the upper part allows better reproducibility of the rupture. A high speed camera helps in visualizing the rupture and the content release, overpressure is measured with PCB at several distances from the source, and the reservoir wall temperature is monitored by thermocouples.

An experimental database composed of large, middle and small scale experiments coming from literature and from the experiments performed in BABELs is then compared to the different models available in literature.

The first conclusion is that for middle and small scale reservoirs, the rupture can happen when the liquid is supercritical. As all the models available in literature are considering a rupture pressure below the critical point, the overpressure modeling has then to be adapted to this new configuration.

The extended abstract and the presentation will compare different scales of data and different kind of ruptures (below or above the critical point) and will show what models are the closest to the experiments.

This study is part of a joint research project carried out by the von Karman Institute, the Ecole des Mines d'Alès, and the CEA Gramat in France.

Preview Presentation:
Presenter(s):
Delphine Laboureur
Once the content has been viewed and you have attested to it, you will be able to download and print a certificate for PDH credits. If you have already viewed this content, please click here to login.

Transient Studies of a Sodium-Sulfur Cell
In the modern grid era , multiple fossil-fueled power generation facilities and renewable energy sources are expected to interact actively. Power produced by...
Automated Methods in Sizing of Relief Vent Stacks Based on Proximity to Occupied Structures
Quantifying the impact of a relief event to personnel is critical to site safety and is mandated by PSM. Within sites and chemical parks containing several...