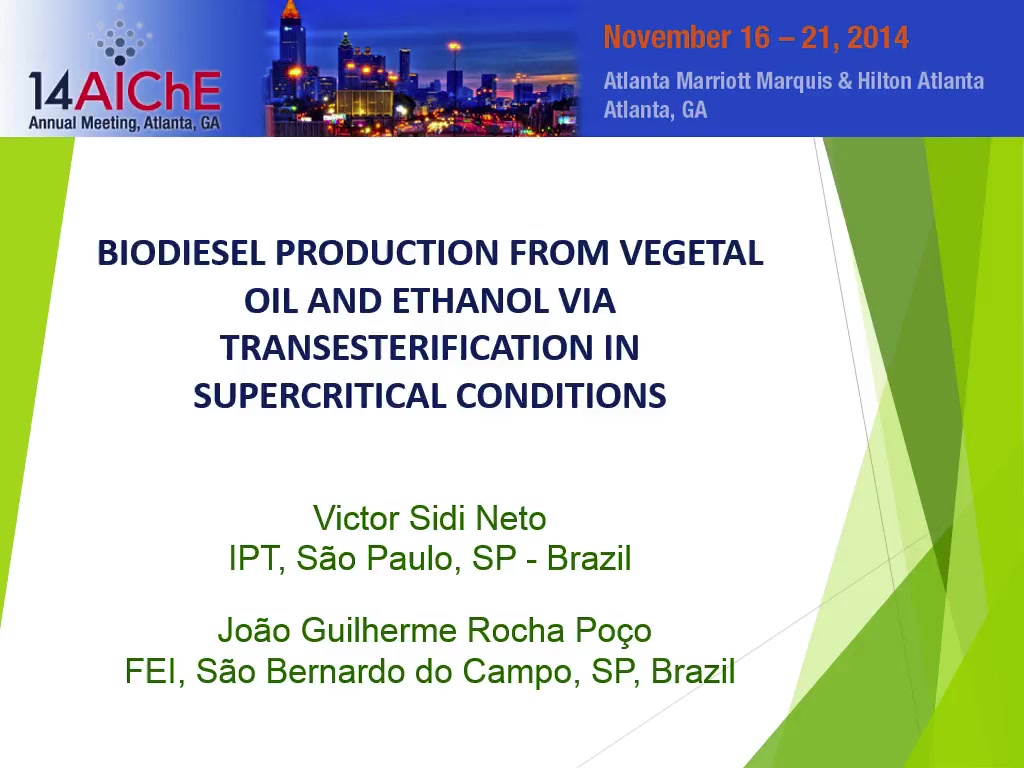 Biodiesel production from vegetal oil and ethanol via transesterification in supercritical conditions.

The main replacement fuel for the petroleum based Diesel is the biodiesel. Over the last years several techniques have been proposed for the production of this fuel which is totally or partially derived from renewable feedstocks.

Because of its relative simplicity of implementation, the transesterification through basic homogeneous catalysis of monoglycerides, diglycerides and triglycerides with methanol in a batch process, is the most common form among the various biodiesel production methods. However, this route raises some problems and imposes some limitations on the process, among which we can highlight:

a) Inhibition of transesterification reactions due to the presence of water and generation of free fatty acids and soap products. Raw materials pre-treatment is required or the use of raw materials free from water (IEA, 2004) in order to avoid that inhibition.

c) Limitations in reactions with other alcohols such as ethanol because this alcohol requires a mass 44 % higher when compared to that of the methanol, requires raw materials with low levels of free fatty acids, consumes a mass approximately 50 % of catalyst and presents more difficulties in separating glycerin/ethyl esters (IEA, 2004), need to be used in its anhydrous form;

e) Variation of total time of reaction from one to eight hours (IEA, 2004);

The above-mentioned problems brings technical difficulties to the productive process and increase its cost. Methods capable of overcoming such technical challenges, generating products with quality equal to or greater than that of the products obtained currently, would make the process more attractive in both the economic point of view and from a technical point of view.

According to the literature the supercritical process is capable of generate high purity esters, without being influenced by the low quality of feedstocks and requiring separation processes that are simpler than those applied to the traditional production techniques such as the transesterification using basic homogeneous catalysts.

The present study aimed to produce biodiesel by supercritical method using soybean oil, oleic acid, and ethanol. The reactions were performed with anhydrous ethanol or hydrated ethanol in order to check how the presence of water in supercritical ethanol influences transesterification reactions and compare with literature data obtained with other experimental apparatus.

Ethanol was used in its anhydrous form, the anhydrous ethyl alcohol fuel 99,7 % and in its hydrous form, the hydrated ethanol fuel 92,8 %, both specified in accordance with current Brazilian legislation. The refined food grade soybean oil and was the oleic acid analytical grades were used as fatty acid sources. Glicerin used in reversibility experiments was analytical grade.

The water content in the reagents and products was determined by Karl Fischer technique. The material balance was calculated and conversions were determined for each experiment. Modeling was done trying to understand the integral phenomena.

The presence of water in the reaction medium was decisive in reactions with vegetable oil. It allowed larger concentrations of ethyl esters were reached at intervals of times smaller.The use of hydrated ethanol could be positive for the productive process since this presents lower cost which eventually would encourage its use in industrial production. These data indicates that this method could be able to operate with lower quality raw materials and that pretreatment steps are not mandatory.

In esterification reactions with oleic acid conversion values reached more than 96 %. The largest conversion of oleic acid confirms the data published by Warabi et al. (2004), which demonstrate the ease of reaction using fatty acids. These experiments showed higher conversions even on lowest temperature, however, the conversion rate was decreased by the presence of water in the reaction medium.

With the implementation of inverse reactions in models was possible to conclude that even using excess ethanol on the reaction medium, transesterification reactions at 340 ° C showed reversibility indicating that equilibrium is not favorable. For the tests performed at 340° C with vegetable oil and hydrated ethanol, apparent signs of reverse reactions might be noticed by the reduction of concentrations of ethyl esters after 60 and 120 minutes of reaction, however, further tests are needed to confirm the final concentrations, the role of reversibility in the reactions and the equilibrium of the reaction.

It was not possible to confirm the reduced time of reaction, one of the advantages of supercritical method presented in the literature for the chosen test conditions. The results indicate temperatures between 310 and 340 °C with hydrated ethanol as being the more efficient conditions for transesterification reactions. With increasing temperature there was a reduction in the time required for the ester concentration get stable around 85 %.

It was detected water formation in the reaction medium, indicating the occurrence of unwanted reactions that could not be identified by the analytical methods employed.

Preview Presentation:
Presenter(s):
Joao G. R. Poco
Once the content has been viewed and you have attested to it, you will be able to download and print a certificate for PDH credits. If you have already viewed this content, please click here to login.