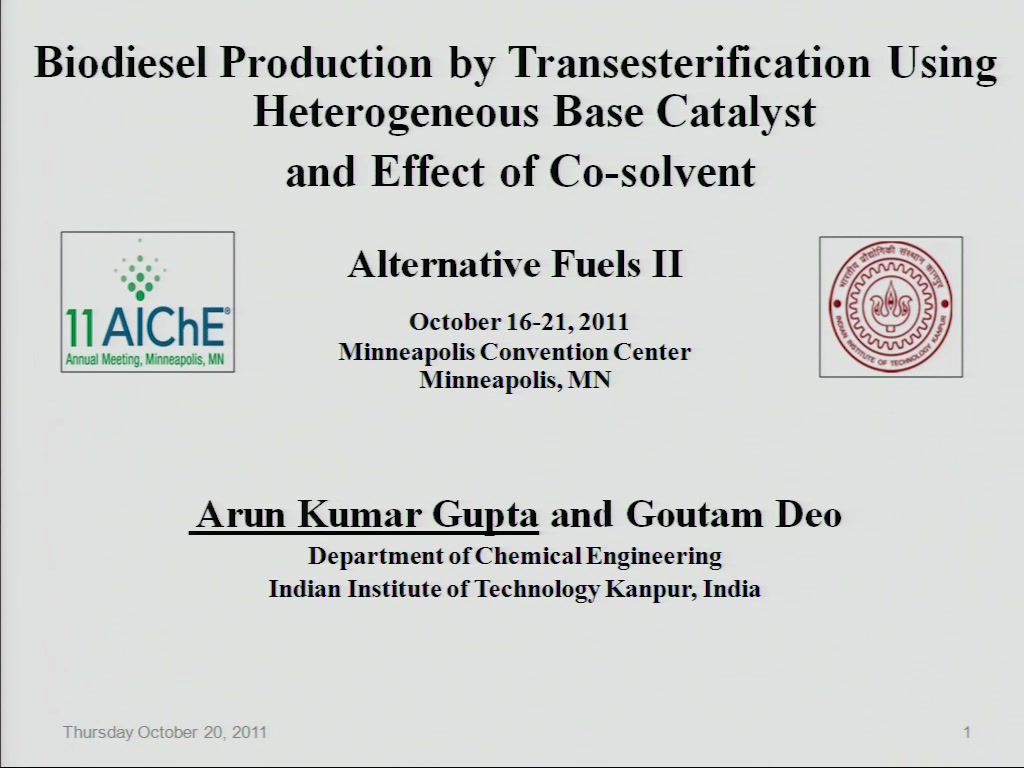 
and effect of co-solvent

Transesterification of triglycerides present in edible and non-edible oils produce fatty acid alkyl esters (biodiesel) and glycerol. Due to stringent environmental constraints for the biodiesel production, the conventional homogeneous base catalysed process using several alkali and alkaline metal alkoxides is being replaced by the heterogeneous solid catalysts. The Transestrification reaction is very sensitive to the presence of water and free fatty acids [1]. In the presence homogeneous base catalyst water and free fatty acids catalysts favours the formation of stable emulsion making separation of methyl ester more difficult [2]. Glycerol is also obtained as an aqueous solution of relatively low purity. Problems related to water and free fatty acid could be avoided by using the heterogeneous catalyst. In the heterogeneous system, however, the presence of more than two phase causes mixing problems. To overcome mixing problems an appropriate co-solvent can be used [3].

In the present study, heterogeneous base catalysts were prepared by the incipient wetness impregnation (IWI) method. In this preparation method, pretreated support was mixed with catalyst precursor and the mixture was dried by a well defined temperature cycle. The transesterification reaction was carried out in a 2.0 litre batch reactor (AmAr Equiprnents Ltd, Mumbai, India). The reactor is equipped with a PID controller, RTD-PT100 temperature sensor, electrically heated jacket, a cooling water circulation system, agitator for proper mixing and a reflux condenser with other valves and gauges. The intermediate samples were collected through valve at the bottom of the reactor. The transesterification reaction heterogeneous catalyst was carried out at different temperatures 20, 30, 40, 50, 60 oC with 250 grams of soybean oil. The required amount of supported catalysts and the volume of methanol with alcohol/oil molar ratios of 6:1, 12:1, 24:1 were added into the reactor. The samples (about 20 ml) were withdrawn at various intervals for intermediate yield analysis. For co-solvent effect, the optimum co-solvent was determined by varying the volume of co-solvent: volume of oil in the transesterification reaction and the procedure is given above is followed.

The transesterification reaction for biodiesel production with a several alkali and alkaline metal alkoxides, such as NaOH, KOH, Ca(OH)2, CH3ONa, CH3OK, (CH3O)2Ca, (CH3O)2Mg were studied using refined soybean oil. The metal hydroxide and alkoxides of Na and K were found to be the most active. The ethanolysis reaction was also studied for homogeneous catalyst and favourable transesterification of soybean is observed. The influence of Na loading on a γ-Al2O3 support for the base heterogeneous catalysts was considered. An optimum NaOH concentration of the catalysts was observed. The yield for the methanolysis reactions reached an optimum at 10 wt % Na/ γ-Al2O3 and 3.5 g catalysts per 100 g of soybean oil. It was observed that the surface area monotonically decreases with an increase in NaOH loading. Some optimum parameters for this catalyst are determined such as agitation speed, temperature effect, molar methanol: oil and catalysts: methanol ratios. The yield of biodiesel was analysed by 1H NMR spectroscopy method [4]. The catalysts were characterised by XRD, BET. The transesterification reactions for heterogeneous catalysts proceed at a relatively slow rate. The heterogeneous reaction mixture constitutes a three-phase system, oil-alcohol-catalyst; therefore the mass transfer limitation controls the initial reaction rate. In the presence of co-solvent reaction rate is as fast as homogeneous and reaches to same final conversion as without co-solvent. Tetra- hydrofuran was observed to be the better co-solvent compared to the hexane and heptane.

“Synthesis of biodiesel with heterogeneous NaOH/alumina catalysts comparison with

Please Note: Members of the Catalysis and Reaction Engineering Division of AIChE are entitled to this content for free. Simply enter the 'promo code' CRECOD when you are checking out. Only AIChE members are entitled to join the Catalysis and Reaction Engineering Division. For more info please click here. click here
Preview Presentation:
Presenter(s):
Arun K. Gupta
Once the content has been viewed and you have attested to it, you will be able to download and print a certificate for PDH credits. If you have already viewed this content, please click here to login.

Sulphur Technology Tutorial Conventional Wisdom and Innovative Frontiers
This tutorial will provide a brief overview of conventional sulphur recovery, tail gas treating and sulphur degassing technologies which are routinely employed...
Hydrogen Production By Catalytic Conversion Of Synthetic Fuels
For fuel cell applications, the production of hydrogen by steam reforming of synthetic fuels such as dimethyl ether, methanol, and dimethoxymethane was studied...