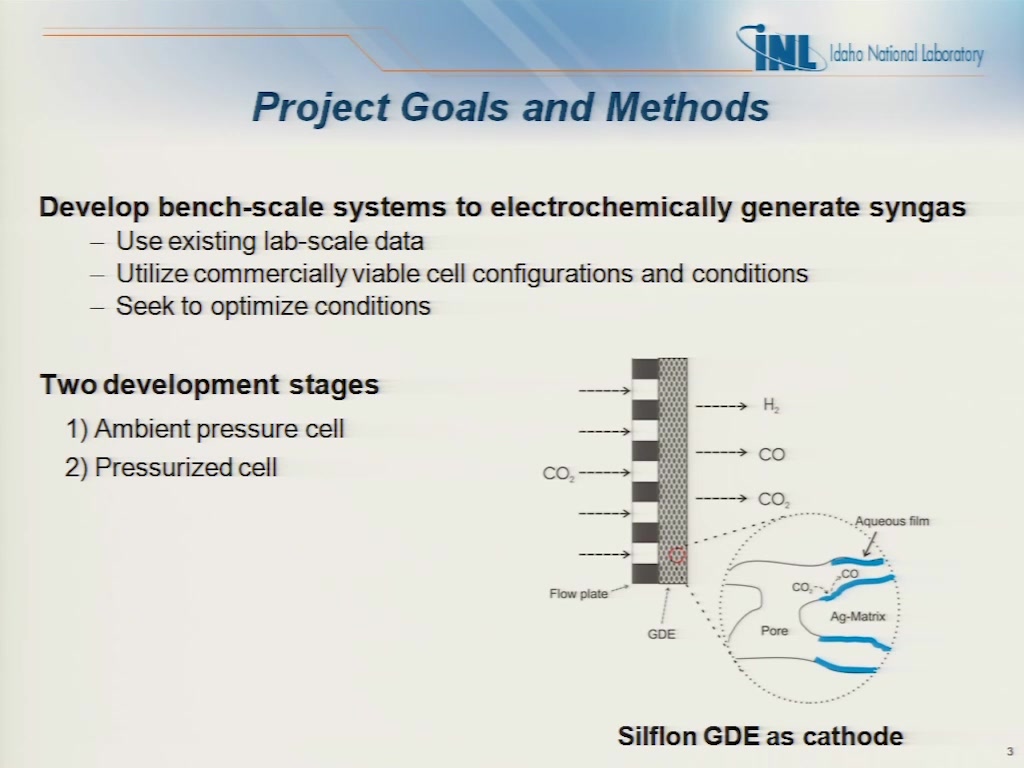 Syn-gas is a very useful mixture of H2 and CO that can be utilized to synthesize a great variety of commodity chemicals and transportation fuels using established methods.

Conventional methods create syn-gas using fossil resources which releases carbon into the atmosphere. Electrochemistry offers a clean method of producing this gas mixture. Two major technical issues exist for efficient electrochemical reduction of CO2: 1) mass transport limitations due to the limited aqueous solubility of CO2 and 2) kinetic limitations leading to loss of energy efficiency. The first limitation can be dealt with by using gas diffusion electrodes (GDE) and pressurized cells. The second limitation results in reduced efficiency and will require additional catalyst development to improve. However, there may be situations were low value electricity or grid isolated energy sources (wind and solar) could overcome efficiency losses. Thus this process could be configured to act as a load leveling device for intermittent electrical supplies and converting this energy to a useful product. This abstract describes a project which has used technical data from previous work in both CO2 and H2O electrochemical reduction to build electrochemical systems to produce syn-gas mixtures. This project's goal is to collect data to enable pilot scale design and production.

To increase the current density for CO2 reduction, mass transport must be increased beyond that possible on conventional flat electrodes. Previous reports have shown increased partial current densities for CO2 reduction at GDEs.[1] The systems described here employ a robust, commercial GDE incorporating a porous Ag catalyst structure called Silflon. The Ag catalyst was chosen to produce CO as the primary product of CO2 reduction.[2] Another approach to increasing current density is to use a cell pressurized with CO2. A cell equipped with a Ag GDE and enclosed in an autoclave at 30 atm of CO2 demonstrated over 3 A/cm2 partial current density for CO formation.[3]  With this previous work as a guide, an alternative pressurized electrolysis system has been constructed which operates at elevated CO2 pressure. Both the ambient pressure and elevated pressure systems utilize filter-press cell designs to minimize resistive losses and provide data for scale-up. Dimensionally stable anodes were used to evolve O2 from a caustic solution. The cathode solution chemistry is largely determined by carbonate acid-base equilibria. While protons are consumed by the cathodic reactions, CO2 reacts with hydroxide to produce carbonate salts. A variety of solution chemistries and both anion exchange membranes (AEM) and cation exchange membranes (CEM) have been studied.

Using the ambient pressure system a number of process variables were investigated.[4] Electrolysis cells such as those used in alkaline water electrolysis operate at elevated temperature where resistive and kinetic losses heat the system. The increased temperature reduced the overall cell voltage and cathode voltage, particularly at higher current densities. The Faradaic efficiency (FE) for CO decreases slightly with temperature. Increasing the current density has a more pronounced effect on the FE for CO, where the H2:CO ratio increases. A significant benefit of the reduced cell voltage is the significant improvement in electrical efficiency with increasing temperature. A well designed commercial scale cell would be able to utilize the electrical inefficiency as a source of heat.

Another factor controlling the H2:CO ratio is the CO2 flow rate into the GDE. As expected, the ratio is inversely proportional to the CO2 flow rate. By controlling the flow rate it was possible to achieve specific H2:CO ratios with CO accounting for 25-90% of the product and H2 accounting for 10-75%. This provides significant product selectivity control needed to provide specific syn-gas ratios for downstream conversion to hydrocarbon products.

Reproducibility of cell performance was also evaluated due to the importance of reproducibility for syn-gas production. Using two different GDEs the experimental reproducibility was evaluated using a minimum of four data points per current density evaluated. Each run involved stepping the current density at 70˚C using 0.8 M K2SO4 as the catholyte and a CO2 flow rate of 30 mL min-1. The data show that the system was reproducible both in terms of the potentials necessary for CO2 reduction, but also in its ability to produce a specified syn-gas composition.

System stability was demonstrated by operating the cell for many hours at various operating conditions. After an initial stabilization period of 40 min, long-term cell performance was stable. The present design has shown bench scale reduction of CO2 can be performed at current densities which are near those currently employed in industrial alkaline electrolysis cells.

The influence of S poisoning on Ag electrodes for the production of synthesis gas (syn-gas) was evaluated.[5] After exposure to Na2S at open circuit potential (OCP) the overpotential for H2 evolution decreased resulting in a significant decrease in the Faradaic efficiency for CO. It was found that poisoning was mostly reversed by performing electrolysis at 20˚C in S free electrolyte. However, at 70˚C this recovery was not possible. Measurements on planar disk electrodes showed distinct stripping waves for S adsorbed at OCP. The stripping waves were influenced by both temperature and the presence of CO2. These measurements show the potential dependant nature of electrode recovery where at elevated temperature adequate polarization to strip S was prevented by H2 evolution. Poisoning during operation leads to a temporary decrease in CO produced which can be mostly recovered by exchanging the catholyte. SEM analysis of S-exposed GDEs demonstrated a blocking of the pore-structure at the GDE surface. Preliminary experiments with economical grades of CO2 showed only minor poisoning due to S-containing species leading to only marginal changes in syn-gas composition.

The impact of membrane type and electrolyte composition was also investigated.[6] The electrolyte lifetime was found to be limited by hydroxide composition in the anolyte, where a reduction in pH results in a significant increase in cell voltage. By changing from a nafion-based CEM to an AEM extended the cell operational time at low cell voltages (Ecell) without impacting product composition. The use of KOH as the catholyte decreased the Ecell and resulted in a minimum electrolyte cost reduction of 39%.

In addition to the ambient pressure measurements described above, work using pressurized CO2 has been performed.[7] The pressurized system displays reproducible behavior at both room and elevated temperatures and the quantity of CO which can be generated is 5 times that observed using similar electrodes at ambient pressure. Above 15 atm it is possible to generate CO at 80% FE at 225 mA cm-2. The FE for CO was 92% at 24.7 atm and 350 mA/cm2. It was found the pressurized cell operates at lower cell voltage than obtained using the same electrode materials at ambient pressure. A cell voltage below 3 V was obtained at 225 mA/cm2, which equates to an electrical efficiency of 50%. Work is continuing to develop this system to couple the electrolysis products to catalytic systems for conversion to hydrocarbon products.

Preview Presentation:
Presenter(s):
Tedd Lister
Once the content has been viewed and you have attested to it, you will be able to download and print a certificate for PDH credits. If you have already viewed this content, please click here to login.