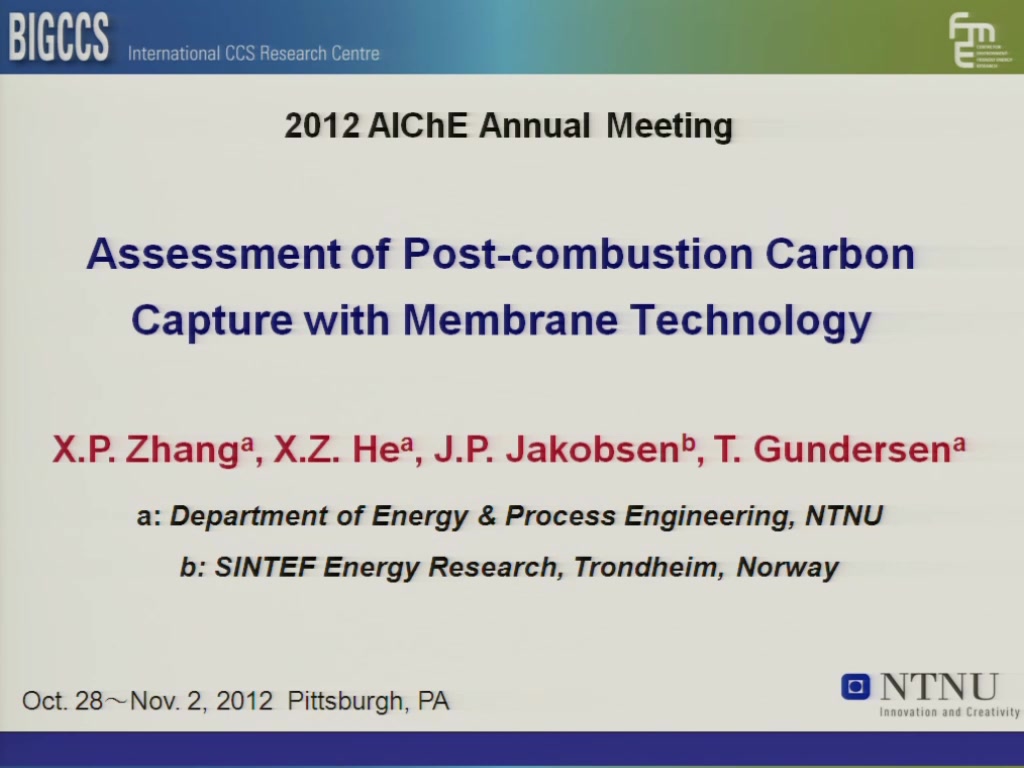 Large scale CO2 Capture and Storage has been considered to be one of the most promising ways of mitigating anthropogenic CO2 emissions, but energy penalty, high economic costs and possible environmental impacts are important barriers for its deployment. One of the effective solutions is to develop lower cost and industrially feasible technologies, especially for the post-combustion capture technologies that have a major challenge due to the large gas volumes, low CO2 concentration and low partial pressure. Among the different technologies, MEA-based systems have been the most likely candidate from an industrial perspective, but some inherent drawbacks, like solvent degradation and large energy consumption, limit its applications. Due to the rapid development of gas separation membrane technology and its inherent benefits for carbon capture1, 2, it has attracted considerable attention. It is expected to have the potential to overcome the drawbacks of MEA-based systems, but most of the research is still done in lab level or pilot scale. From the viewpoints of industrial application and process design, understanding deeply the technical and economic benefits or drawbacks of the new technology along with fundamental experimental research is of significant importance for further development, and can also provide possible research directions to accelerate the industrial application of the technology.

However, there are only a few reports related to systematic analysis of membrane systems compared to the large amount of work focusing on material synthesis and experimental research2, 3. Bounaceur et al. performed relatively early a systematic analysis of the separation performance and energy cost of a single stage module and optimized the pressure ratio4, but they did not perform any economic analysis. Zhao et al. described a detailed parameter study of mass and energy balances for a single membrane5 and also the energetic and economic analyses of a multi-stage process6. Merkel et al. investigated the influences of membrane parameters and process configurations on the energy consumption and capture cost, and some important suggestions were proposed for future studies7, however, more detailed economic models should be used. Hussain et al. investigated the feasibility of carbon capture from flue gas by facilitated transport membranes, and a real gas composition was considered8. However, some results were inconsistent and only a few of these studies focused on thermodynamic analysis for this energy intensive process. Britan et al. studied the feasibility of membrane technology of mixed gas separation with pure thermodynamic principles9, but did not consider the real process.  Thus, further systematic analysis and assessment is important and necessary.

In this work, a systems methodology integrated with process simulation, technological and economic analysis as well as exergy analysis is applied to assess a membrane capture technology and compare it with MEA-based systems. An Advanced Super Critical (ASC) Boiler and Turbine delivering 819 MWe (gross) being part of a coal based power plant is chosen as a base case for the study. The flue gas after ESP and FGD to remove ash and sulfur is fed into the membrane separation system. The aim of the work is to try to clarify the advantages and disadvantages with using membranes for post-combustion carbon, and to indicate what the main obstacles are and how far from commercialization the technology is.

At first, the current research on polymeric membranes for post-combustion CO2capture is reviewed, including the type of membranes, application conditions, permeability and selectivity, and some emerging materials. Then the membrane separation process is simulated with a cross flow model in PRO/II. Under the different process configurations, membrane parameters and operational parameters, the mass and energy balances, the power consumption as well as the membrane area are estimated. Afterwards, the influence of key parameters on membrane area and energy consumption is studied. A cost model is established to estimate the capture cost, and used to optimize the key parameters. Both the energy consumption and the capture cost of the membrane technology are compared with MEA-based systems. Finally, the exergy analysis method is used to identify the bottlenecks of the energy consumption in a multi-stage membrane process.

The simulation results show that the energy consumption and membrane area of a membrane process are influenced greatly by CO2 permeability and CO2/N2 selectivity, which are the two key parameters in carbon capture from flue gas. Unfortunately, there is frequently a trade-off between permeability and selectivity, which is also a big challenge in material development. Higher CO2 permeance can reduce the specific energy consumption and membrane area considerably. For a given CO2permeance, the specific energy consumption decreases with increasing selectivity, however, more membrane area is needed. But in general, continuously increasing selectivity will not influence the separation performance so much, which means that permeance could still be the dominating parameter.

Besides the membrane parameters, the configuration of the separation process also plays a key role for energy requirement and capture cost. Due to the limitation of the membrane performance for post-combustion capture at present, it is hard to reach both 90% capture ratio and 90% CO2purify with 1 stage membrane separators, otherwise a very high pressure ratio across the membrane is required and tremendous energy is needed to compress the gas and create vacuum, which is unpractical. Multi-stage processes represent a good option to resolve this problem, but more than 2 stages will be very complex from an operational point of view. The simulation and optimization results in this work also show how the capture load in each stage influences the total energy consumption and capture cost.

Depending on the influence of membrane parameters and flowsheet structure, referring to the concept of Robeson Plot10, a 3-dimensional profile which reflects the relationship between permeability, selectivity and capture cost is drawn, which provides a roadmap to develop the suitable membrane material which has the possibility to compete with an MEA-based system.

Different from the MEA-based system which is a typical chemisorption process, the membrane separation of CO2from a gas mixture is a physical process and the driving force is the pressure differential of the gases between the feed and permeate side. The energy demand to produce the high pressure ratio between upstream and downstream is noticeable. Thus, understanding the energy consumption level is a key point for process design, and exergy analysis is a basic method for this purpose. It is helpful to indicate where the exergy losses occur, the magnitude of these losses, and what the bottleneck parts are. Taking a two-stage process as a case study, the total exergy loss due to irreversibilities, waste heat and waste mass in each unit is calculated and ranked. The results show that the largest exergy loss occurs in the 1st membrane stage, followed by the 2nd stage. The two separators contribute to about 80% of the total exergy loss due to irreversibilities.

Compared with an MEA-based system, the gas separation membrane technology has shown some advantages for post combustion carbon capture, such as less environmental footprint, ease for scaling up and operability, without auxiliary retrofitting measures or costs in the power plant. In this work, some important aspects of this new technology were investigated using an integrated assessment method and making a comparison with an MEA-based system.  This study will be important both for membrane development and future industrial applications.

This publication has been produced with support from the BIGCCS Centre, performed under the Norwegian research program Centers for Environment-friendly Energy Research (FME). The authors acknowledge the following partners for their contributions: Aker Solutions, ConocoPhilips, Det Norske Veritas, Gassco, Hydro, Shell, Statoil, TOTAL, GDF SUEZ and the Research Council of Norway (193816/S60). We are grateful to the anonymous referees for their constructive comments on an earlier version of this paper.

Preview Presentation:
Presenter(s):
Xiangping Zhang
Once the content has been viewed and you have attested to it, you will be able to download and print a certificate for PDH credits. If you have already viewed this content, please click here to login.

Machine Learning the COSMO Model for Predicting Thermodynamics of Electrolyte Mixtures
Bottom-up design of electrolyte mixtures for battery systems requires predicting macro thermodynamic properties from molecular constituents. Molten salt...
Micro Reaction Calorimetry: Applications for the Chemical & Pharmaceutical Industry
When it comes to micro reaction calorimeter, could there be applications beyond scale-up and reaction calorimetry itself you’re not aware of? Join this...