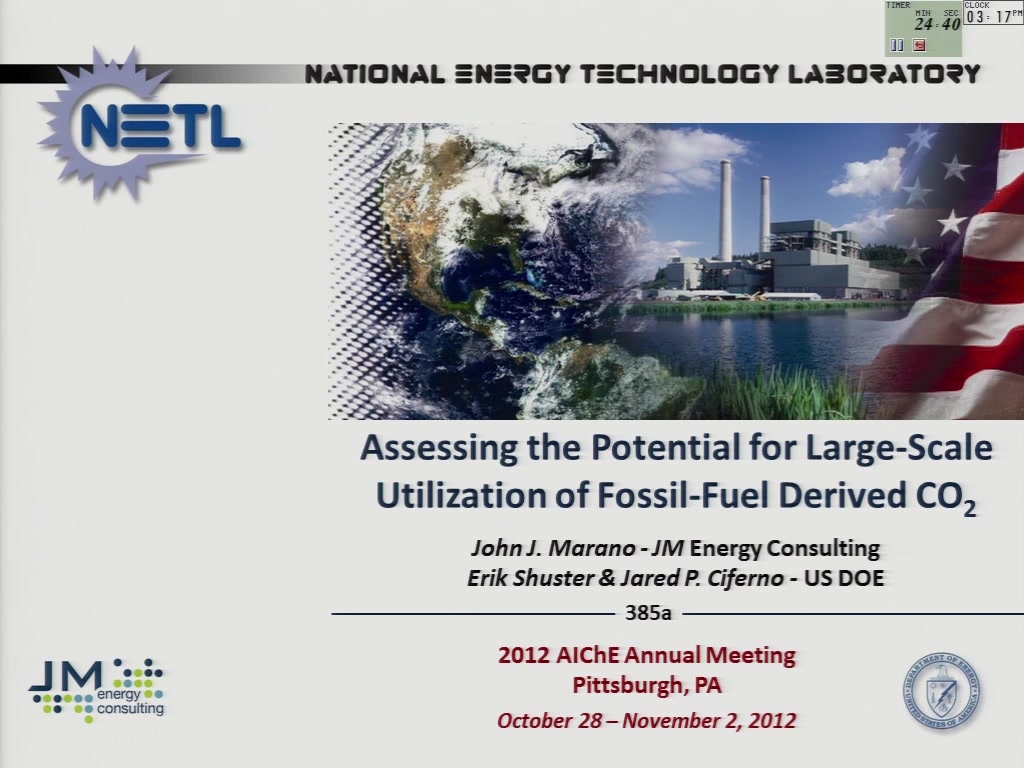 Barring the imposition of a carbon tax (or equivalent cap-and-trade program) and corresponding international agreements, it is highly unlikely that carbon capture and storage/sequestration (CCS) will be implemented in any meaningful way in the near future. This is due to inherent inefficiency and higher costs associated with this option for mitigating climate change.  Unfortunately, the science of climate change suggests that the world community must begin to act sooner rather than later. From an Industrial Ecology viewpoint, a preferable approach to carbon storage in perpetuity would be to re-use the carbon associated with the fossil-fuel derived CO2 already being omitted. However, options for directly utilizing CO2 are quite limited, with enhanced oil recovery (EOR) being the only physical use of CO2 of any appreciable size. The concept of converting CO2 to useful products has been explored in the past, but has fallen from favor in many policy circles due to the lack of a clear vision of how re-utilization of fossil carbon could be implemented. Given current in-action, it is worth re-visiting this concept.

Energetically, it is clear that the large-scale conversion of CO2 to useful products requires a source of external energy that is not fossil-fuel derived; otherwise, the conversion process becomes itself a source of CO2 emissions.  Sources for the required energy could be direct solar or nuclear energy, or electricity generated from these primary energy resources. Obviously, a source of CO2 is also required; however, all sources are of equal value. Atmospheric and mobile emissions are of little value due to the problems associated with collecting and concentrating them. Whereas, CO2 from stationary point sources, and in particular large point sources such as coal and natural gas-fired power plants, are the “low hanging fruit” for implementing carbon re-use. Finally, useful products from CO2 must be identified. It is suggested here that instead of pursuing a piecemeal approach consisting of an assortment of finished chemicals and material goods, a holistic approach be taken. Currently, the only existing commodity market that is big enough to absorb the large scale re-utilization of CO2 lies in the petroleum sector. Thus, the basis for any carbon re-utilization platform should be the production of a petroleum substitute, a “synthetic” oil that may be refined and converted into a multitude of finished products.

This paper first compares and contrasts carbon storage with carbon utilization, and then moves on to quantify the scale of any carbon re-utilization effort; as well as, CO2 life-cycle limitations of re-use. After all, in this approach much of the synthetic oil, like petroleum, will end up being (re-) combusted as an end-use transportation fuel. Thus, carbon re-use can only be considered as an interim strategy for cost effectively transitioning away from fossil fuels. We also briefly touch on the implications of large scale carbon re-use for CCS R&D, since the requirements for CO2 capture, transport and short-term storage will be quite different than what is anticipated for long-term CO2 sequestration. Finally, we briefly discuss the possible economic implications of this strategy. A follow-on paper at this conference identifies and analyzes what the present and best future options for producing a CO2-derived synthetic oil might be.

Preview Presentation:
Presenter(s):
John J. Marano
Once the content has been viewed and you have attested to it, you will be able to download and print a certificate for PDH credits. If you have already viewed this content, please click here to login.

Fischer-Tropsch Synthesis: Comparison of Process Based On Fossil and Biomass Feedstock
The conversion of synthesis gas to fuels is independent of the feedstock once the proper ratio of hydrogen/carbon monoxide has been obtained. In one approach...
Cracked Gas Dryer Survey
An electronic internet survey was distributed to United States and European ethylene producers. The goal of the survey was to document vessel design and...