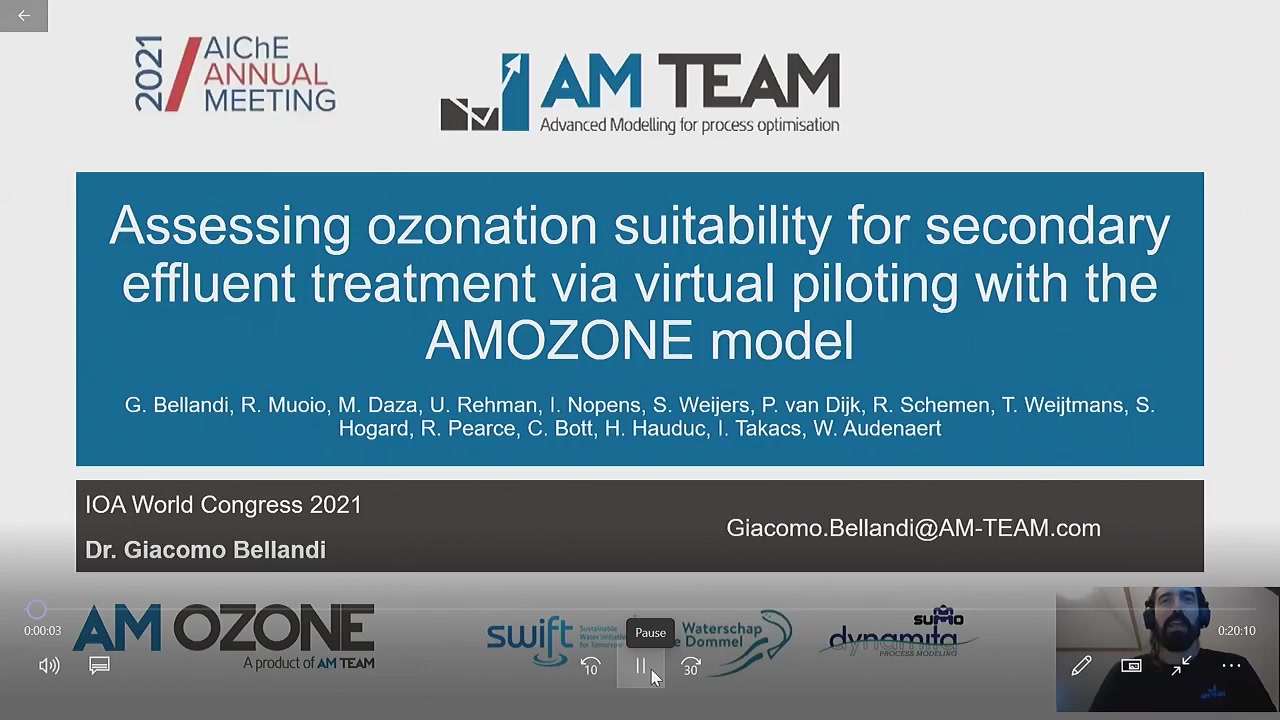 Drinking water treatment and (indirect) potable water reuse (IPR) is nowadays a topic of major attention due to the rising (and interconnected) concerns about water scarcity and micropollutants (MPs) such as pharmaceuticals and pesticides. Advanced tertiary treatments are increasingly adopted at water treatment sites to eliminate compounds with elevated biological resistance and produce safe water for human consumption (e.g. treatment to drinking water standards prior to aquifer discharge). In the US there are multiple examples (e.g. the HRSD SWIFT project (swiftva.com)) aimed at environmental protection from MPs. Conventional water resource recovery facilities (WRRFs) only partially contribute to these goals, and often in a rather unpredictable manner (Schaar et al., 2010).

Ozonation and (biological) granular activated carbon adsorption is establishing more and more (especially in Europe) as an attractive IPR technology alternative for MP removal, beside the more consolidated membrane filtration (UF/RO) combined with advanced oxidation. However, the extensive piloting efforts needed for a proper assessment of its applicability have hampered the full applicative potential of ozonation.

Ozone has complex reactions with the effluent matrix. Some of those pathways lead to hydroxyl radical (HO*) formation. Both ozone and HO* will oxidise the MPs. However, depending on the natural Br- concentration in the water, the carcinogenic byproduct bromate (BrO3) can be formed. In addition to this, the specific ozone demand is strongly effluent matrix dependent, leading to significant differences in operational cost, MP removal efficiencies and BrO3 formation across WRRFs. Next to the very site specific effluent organic matter (measured as chemical oxygen demand (COD), dissolved organic carbon (DOC), ...), effluent variability is of key importance. Effluent variability of the upstream biological treatment can impact the downstream ozonation process in various ways (e.g. pH, organics, ammonia, nitrite, alkalinity, bromide). Nitrite is known to consume O3 (3.43 mg O3/mg N-NO2) and HO* significantly affecting the OpEx (Sehlén et al., 2020). In addition to this, ammonia is known to partially inhibit BrO3 formation (von Gunten, 2003a).

It is this complexity of chemical reactions and site specificity that makes utilities and designers engage in extensive onsite piloting trials prior to full-scale implementation. These piloting efforts easily cost hundreds of thousands of EUR and over a year to several years and need dedicated safety measures and operator training. Extensive analytical measurements of bromate, MPs, ... are an inherent part of the trials, while the whole exercise offers only limited information in proportion to the cost and effort. On top of this, in IPR trains, the additional regulatory compliance with regard to disinfection adds complexity (i.e. O3 residual needs to be assessed to quantify â€˜CTâ€™).

This paper describes the application of the novel AMOZONE model for virtual piloting: the complete replacement of onsite piloting by computer simulation at (virtual) full-scale using a mechanistic model with the SumoÂ© platform (Dynamita). The AMOZONE model has similarities with the well-established Activated Sludge Models Models (ASM): it relies on â€˜groupingâ€™ parameters (e.g. Chemical Oxygen Demand (COD) fractionation in ASM) to handle the complexity of real matrices, while being built on mechanistic process understanding.

The Netherlands is currently accelerating implementation of demo and full-scale plants for MPs removal. To be eligible for the national funds, the plant should be operated at removal efficiency of 70% for 7 of 11 guide MPs. For the first time ever, virtual (model-based) pilot testing was performed for two WRRFs in The Netherlands to assess MP removal, CapEx and OpEx and bromate formation.

The WRRFs of Eindhoven and Soerendonk are conventional activated sludge plants with treatment capacities of respectively 750,000 and 38,000 person equivalents. In the framework of this project, Waterschap De Dommel organized dedicated weekly measurement campaigns to monitor plant effluent characteristics important for ozonation (e.g. Br-, NO2, ...). In addition to this, online sensors were installed for a month-long monitoring campaign at the effluent of both WRRFs to measure UV transmittance (UVT), Dissolved Organic Carbon (DOC), NO3, NO2, and Turbidity. This data, together with plant flow rates were used as input for the model for the dynamic simulations.

The AMOZONE model needs calibration for the specific WRRF matrix. At each plant, four 24h composite samples were taken during dry weather days and used for batch ozonation tests revealing O3, HO*, UVT, Br-, BrO3, NH and NO2 profiles as function of ozone dose and time. Two of the batch tests were used for model calibration while the remaining ones were used for validation. More extensive model validation on existing pilot or full-scale plants was performed earlier in the framework of SWIFT and other projects (data not shown).

The model was calibrated for both plants with batch ozonation tests performed on three samples of the biological plant effluent. Each sample was collected over 24h with a flow proportional sampler and two specific doses of ozone were tested. Figure 1 shows examples of the calibration and validation results against the batch laboratory tests performed on the secondary effluent composite samples. Additional samples have currently been taken to further quantify model uncertainty under dynamic conditions. Despite the work to be performed, the model already addresses key issues.

Dynamic model simulations were run using the online data collected at the WRRF effluent. The model results show important effects of NH4-N concentration in the framework of BrO3production. In specific, the model addresses significant responsibility to NH4 in sequestering Br- under the form of mono- and di-bromamine, which makes it unavailable for BrO3formation.

Advanced treatment modelling is specifically relevant given the growing importance of MP removal and IPR. AMOZONE is very recent, and the modelling exercise has not been finished yet (e.g. extensive uncertainty analysis under dynamic conditions at many existing plants). However, practitioners and industry leaders already explicitly acknowledged the value, as real-life ozone testing is expensive, complex and characterized by significant uncertainties.

For the first time onsite ozonation pilot testing was completely replaced by computer simulation. This work shows the potential of virtual piloting in accelerating the understanding of ozonation for a specific water matrix. For the first time, a computer model completely replaced onsite ozonation piloting trials. For the Soerendonk WRRF, 70% removal of MPs could be achieved with ozone doses varying between 0.7 and 5 kgO3/h. At this small WRRF, the operational cost varied between 2 and 3.5 cEUR/m³. The AMOZONE model is expected to play an important role in IPR and MP removal process testing, design and operation. Coupling of the model with conventional WRRF models can be used for overall cost saving and performance maximisation. 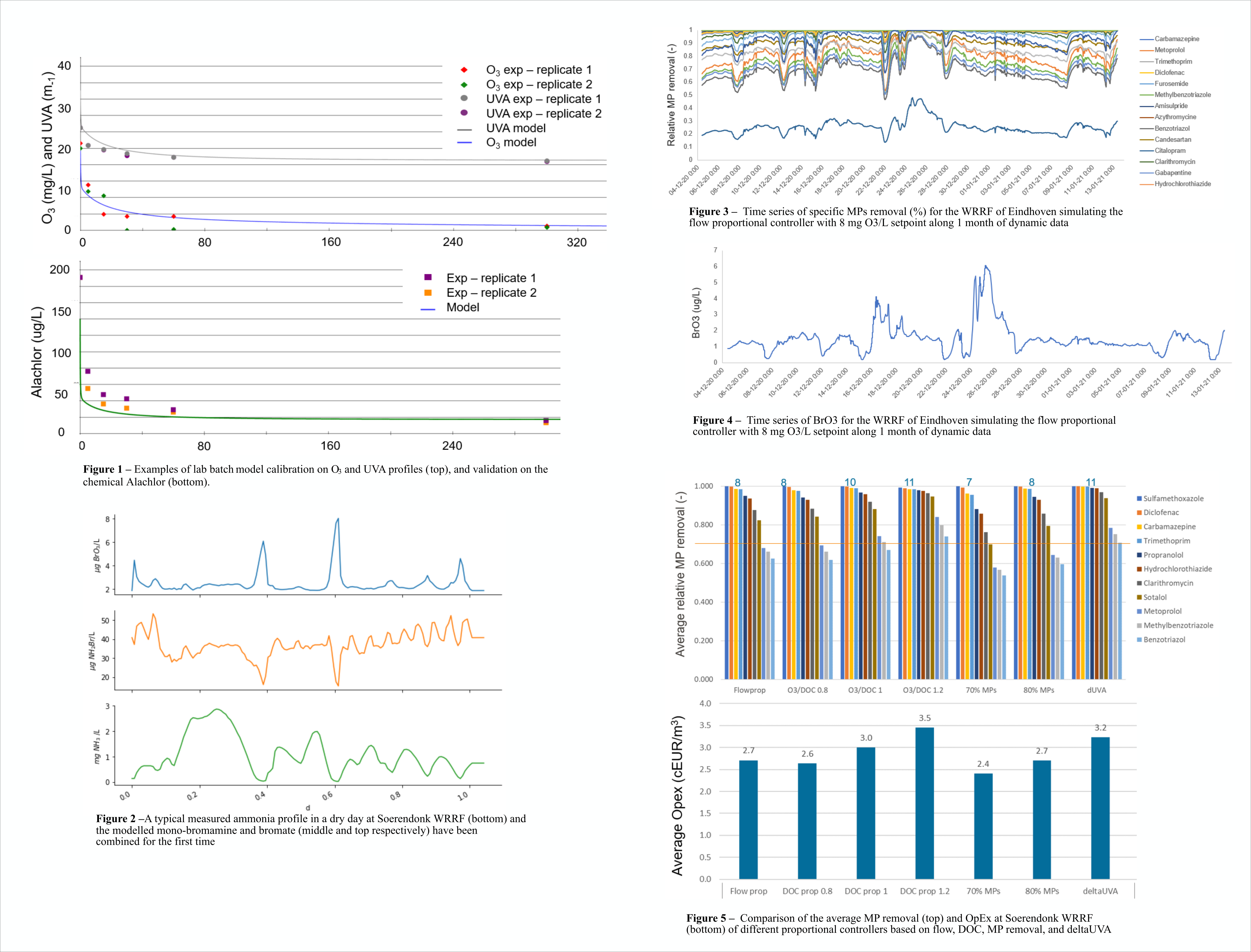 Preview Presentation:
Presenter(s):
Wim Audenaert
Giacomo Bellandi
Miguel Daza
Peter van Dijk
Roberta Muoio
Ingmar Nopens
Usman Rehman
Ruud Schemen
Stefan Weijers
Tom Weijtmans
Once the content has been viewed and you have attested to it, you will be able to download and print a certificate for PDH credits. If you have already viewed this content, please click here to login.