An Analysis of CSB Investigation Reports for Inherent Safety Learnings 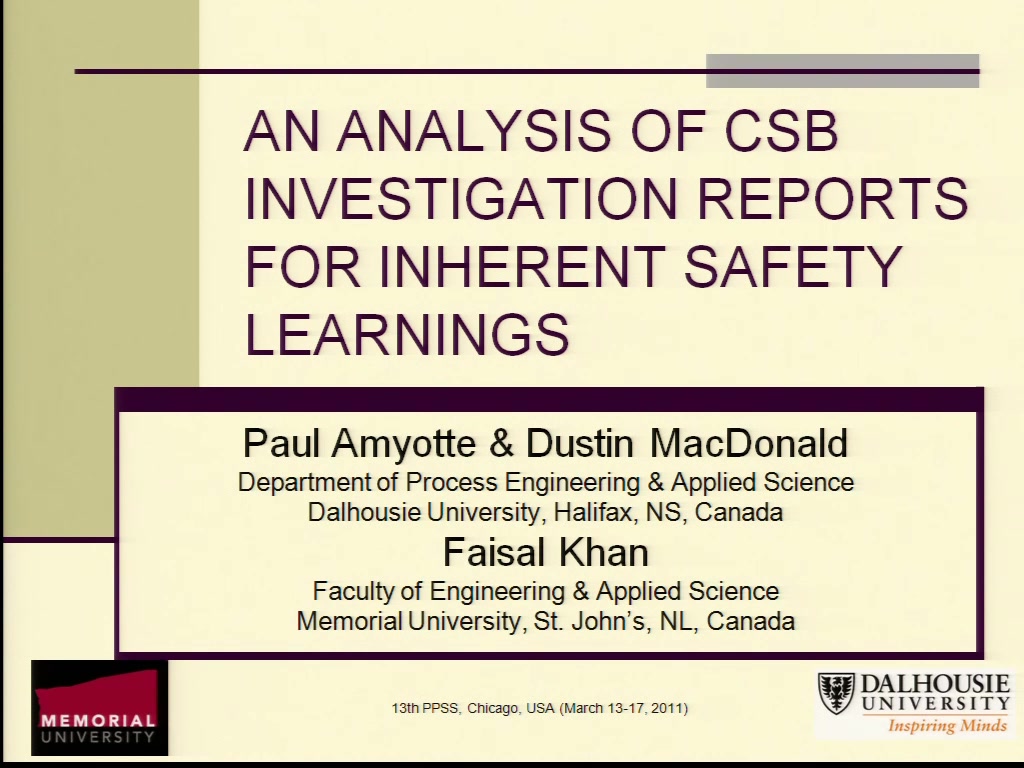 
The Chemical Safety and Hazard Investigation Board (CSB) is an independent, nonregulatory federal organization in the United States dedicated to investigating serious accidents in the chemical industry. Accidents are investigated by a team of CSB employees and from the evidence collected a list of root and contributing causes are formed. Using this information, the CSB creates a set of recommendations for facility managers, regulatory agencies, technical associations and the like. A report or case study is made available on the Board's web site (www.csb.gov) following a completed investigation; these documents often have accompanying video support and can serve as valuable learning tools for improving safety in the process industries.

There has been a welcome trend in CSB reports toward an increasing use of the vocabulary of inherent safety ? as reflected in the principles of minimization, substitution, moderation and simplification. This development can be seen in the explicit use of inherent safety terminology in the CSB's BP Texas City and Valero McKee Refinery reports issued in 2007 and 2008, respectively, and culminating in the recently released 2010 report on the Kleen Energy natural gas explosion in Middletown, CT which killed six workers. Earlier reports also contain numerous examples of the lack of application of inherently safer design principles which, had they been implemented prior to a particular incident, might have helped prevent its occurrence or mitigate its consequences.

The current work was motivated by two factors: (i) the significant value of CSB incident investigation reports in promoting lessons learned from process industry case studies, and (ii) a desire to encourage the continued and increased usage of the language of inherent safety in all incident investigation reports. To this end, 56 reports and case studies of the US Chemical Safety Board were analyzed for examples of inherent safety application or lack thereof. The analysis was conducted within a threefold framework according to: (i) the individual inherent safety principles of minimization, substitution, moderation and simplification, (ii) the risk components of likelihood of occurrence (i.e., prevention) and severity of consequences (i.e., mitigation), and (iii) the twelve elements of Process Safety Management (PSM) recommended by the Canadian Society for Chemical Engineering and which are based on the PSM structure developed by the Center for Chemical Process Safety prior to the recent introduction of risk-based PSM. As the research proceeded, the decision was made to extend the analysis using the above framework to the remaining levels in the hierarchy of risk control measures ? i.e., passive engineered, active engineered and procedural safety.

Over 100 examples related to inherently safer design were identified with about 80 % being linked to preventive measures. The largest contributor to the total number of inherent safety items was simplification; the remaining items were equally split among minimization, substitution and moderation. The top PSM elements involved were process and equipment integrity, management of change, process knowledge and documentation, and capital project review and design procedures.

Approximately 150 additional examples of other safety controls were identified. Procedural safety issues were predominant, especially with respect to the PSM element of training and performance. Process and equipment integrity was pertinent to many of the examples identified for passive engineered safety and active engineered safety.

The presentation and paper will include a discussion of the rationale and motivation for undertaking the current work. Specific examples will be given which clearly illustrate the interplay among the inherent, passive engineered, active engineered and procedural safety levels in the hierarchy of controls. The relationship of the hierarchy levels to the risk reduction concepts of prevention and mitigation, as well as to the systematic management of process safety, will be illustrated by an example-based approach. Finally, an overall quantitative analysis will be provided according to the previously described threefold framework. Throughout the presentation and paper, emphasis will be placed on the process safety lessons afforded by the US Chemical Safety Board reports of investigations.

Preview Presentation:
Presenter(s):
Paul R. Amyotte
Once the content has been viewed and you have attested to it, you will be able to download and print a certificate for PDH credits. If you have already viewed this content, please click here to login.

An early lesson and a late night: how I learned the real design expert is the user
During my first few weeks as a full-time engineer, safety truly hit home. My co-worker and I had been tasked with working on a fermentation filtration...
The Phillips Petroleum Explosion Thirty Years Later: Remembering the Lessons from This Incident Today
October 23, 2019 marked the thirty-year anniversary of a devastating fire and explosion that claimed the lives of 23 workers at a major chemical plant in...