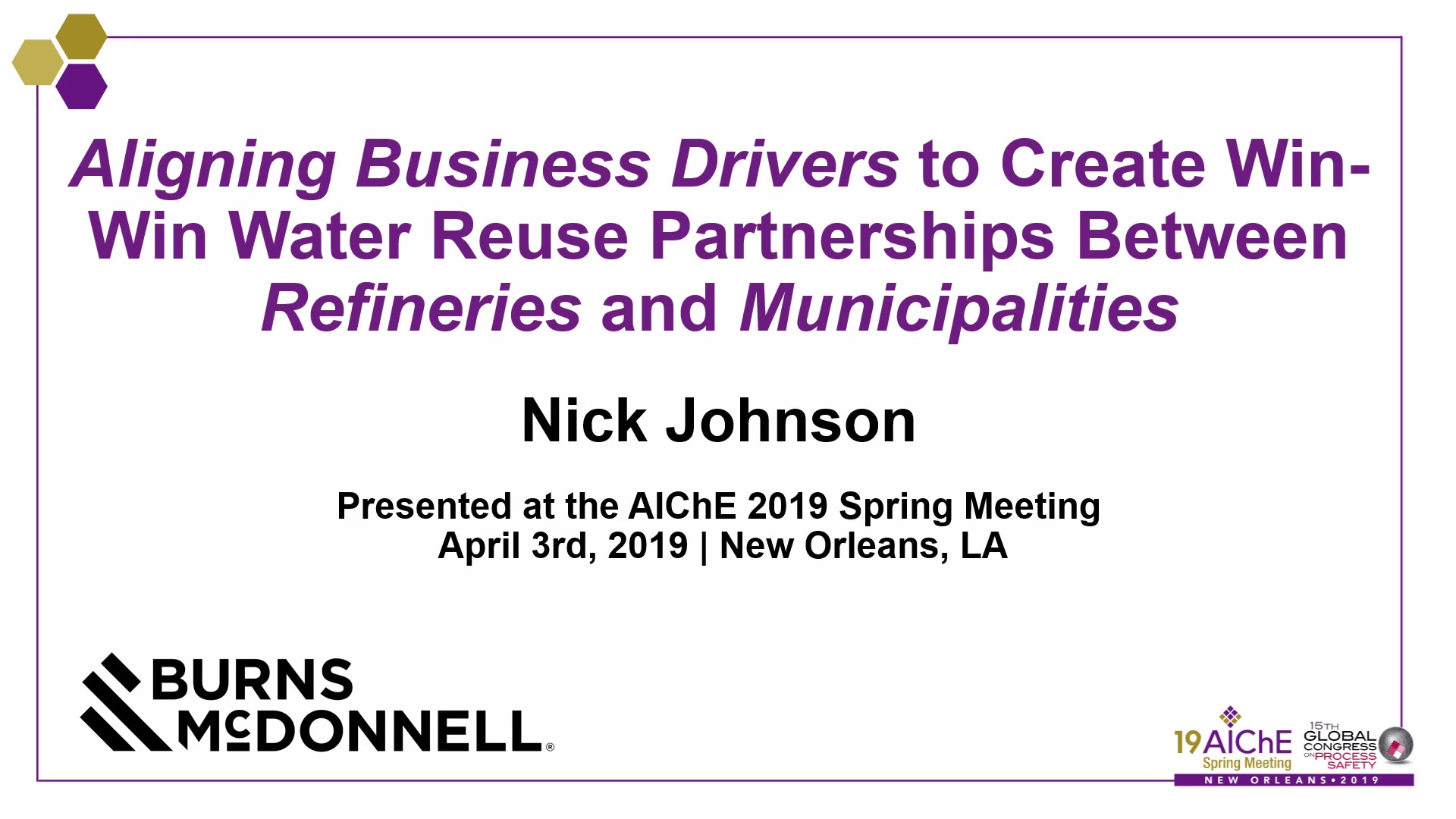 Historically, water has been a low-cost utility for many refiners â€“ one that required little consideration and optimization as to the source. However, as water stress in industrial facilities has become more prevalent in recent decades, refiners have been forced to more closely examine their water usage. Municipal wastewater effluent is an intriguing water source for refineries trying to reduce their reliance on potable water sources. It has been successfully used for makeup water in numerous facilities, allowing these refineries to respond to water stress and reduce their water costs. However, there exists a natural conflict between industrial users and municipalities when it comes to water reclamation. While reuse of municipal wastewater offers a refinery a lower cost source to reduce their expenditures on water, the refineryâ€™s gain can become the municipalityâ€™s loss as decreased revenue is realized from the sale of potable water. As a result, many discussions regarding water reuse begin with great intentions, but ultimately never result in an agreement due to failure to address key business drivers of all stakeholders.

The inherent conflict of interests plays a significant role in the feasibility of municipal effluent reuse, and a successful reclamation program is one that alleviates this conflict to provide a sustainable solution that is a win-win for both parties. While the business interests of refineries and municipalities may diverge at times, they find common ground on the complexity of the issues they face. Environmental and human interests, water scarcity and conservation, the infrastructure present, and reliability drive the decisions of municipalities and refineries, and ultimately those interests must balance with revenue and capital expenditures required for additional infrastructure. Although the large number of factors spurring wastewater decisions certainly can complicate the path toward a successful water reclamation program, they also provide ample opportunities to find similarities in the issues that both parties face and reach an agreement that allows each to come out ahead. While negotiating these win-win reuse agreements can be a difficult task, the ability to understand and appeal to the business drivers of the other party can go a long way toward reaching a deal.

When it comes to the varied business drivers of refineries and municipalities, there are certainly factors that can push them into alignment. Water stress is one of the most common, with drought, population growth, and degradation in the quality of existing water sources all being observed in various parts of the county. In these instances, refiners and municipalities have a clear reason to cooperate in conserving their local resources and preserving their business. These concerns are not going away any time soon. Water stress is expected to increase across the United States, and so will the need for reliable alternative water sources. It can be expected that the number of water reuse programs between refiners and municipalities will increase in conjunction. There is a need to secure water resources to ensure the long-term health of the business, which ultimately boils down to the same idea for both municipalities and refiners â€“ a sustainable and consistent water source is vital for profit generation.

Municipalities and refineries also share a need for long-term planning of infrastructure upgrades. Water reuse solutions require capital expenditure for infrastructure, and both parties must reach an agreement on the responsibilities for expenditures. Negotiating capital expenditures associated with water reclamation can be difficult due to varied expectations in return on investment between industry and municipalities, as well as potentially complex financing options that may be available. A long-term partnership via a water reuse program can provide stability to allay these concerns, while also promoting greater coordination to allow for capital efficient solutions and optimization of treatment. With greater assurance that both parties will see a return on their investment via a long-term agreement, municipalities and refineries can feel more secure in the capital expenditures they make.

A number of refineries in water stressed regions of the country have entered into water reuse partnerships with local municipalities to great success. One midwestern refinery used municipal effluent to reduce its water draws from a nearby aquifer, which also supplied raw water to the cityâ€™s potable water treatment plant and was being dewatered at an alarming rate. As a result of the project, the refinery was able to reduce its spending on raw water and secure a water source for years to come, and the municipality was able to preserve the health of the aquifer and protect the source of potable water for its inhabitants. Other municipalities in the water-stressed west have responded to booming populations and drought conditions by implementing their own reuse programs with local refiners. One bay area municipal water district has partnered with a nearby refinery to provide municipal wastewater effluent to the refinery for cooling tower makeup and boiler feed water at no volumetric charge (Baldwin and Towey, 2015). In exchange, the refinery reimburses the municipality for all capital, operating, and maintenance costs. With the institution of the reuse program, the refinery avoids drought surcharges and has a more cost effective raw water source while demonstrating their commitment to sustainability, and the municipality frees up potable water sources for human consumption while receiving financial backing to complete projects that improve their ability to protect their water sources for the future.

The reuse of municipal wastewater effluent provides a sustainable method of conserving water resources and has been executed with success in numerous instances around the country. While arriving at a reuse agreement that is a win-win for both parties can be difficult, there are numerous instances in which municipalities and refiners can find shared business objectives. By appealing to these shared objectives and understanding the drivers of the other party, refiners and municipalities have reached agreements that preserve water supplies, future business, and communities.

Preview Presentation:
Presenter(s):
Nick Johnson
Once the content has been viewed and you have attested to it, you will be able to download and print a certificate for PDH credits. If you have already viewed this content, please click here to login.

Combined Natural Gas Liquefaction and Power Generation Plant With Carbon Dioxide Sequestration
It is generally well accepted that an increase in anthropogenic emissions is a leading cause of the increase in levels of carbon dioxide (CO2) , one of the...
Modeling and Optimization of a Cracked Naphtha Post-Treater
FCC cracked naphtha is a valuable component of the gasoline pool that, when untreated, is characterized by high olefin and sulfur content. The limitation on...