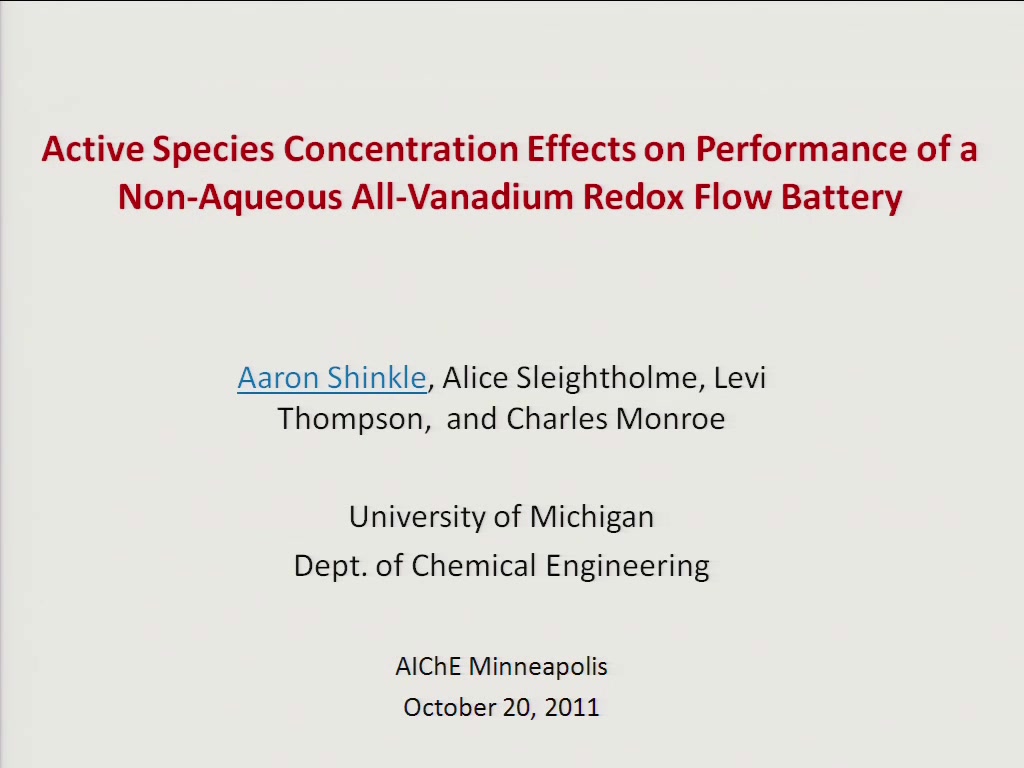 
Redox flow batteries (RFBs) are being developed for large-scale energy storage, uninterruptable grid-independent power supplies and load-leveling systems for solar or wind power. Aqueous chemistries are used for all current commercial RFBs, therefore, cell potentials are limited to the stability range of water (0?1.23 V vs. SHE). Since a battery's cell potential determines its energy and power density, aqueous chemistries limit the possibilities for the performance of RFBs.

Several non-aqueous systems have been reported recently, including systems based on ruthenium, uranium, chromium, manganese, and vanadium coordination complexes [1-5]. In the case of vanadium acetylacetonate, the use of a non-aqueous electrolyte results in a stable cell potential window of 2.2 V [5], more than 50% wider than the aqueous single-metal vanadium chemistry (1.26 V [6]). However, very few results from battery charge/discharge experiments have been shown for this non-aqueous vanadium system.

This talk will examine the charge/discharge profile for the vanadium acetylacetonate (V(acac)3) RFB system in acetonitrile, with tetraethylammonium tetrafluoroborate (TEABF4) support. The effects of active-species concentration on battery performance were examined. Linear sweep voltammetry will be used to determine the maximum charge/discharge rate of the battery cell as a function of electrolyte composition. Figure 1 shows the first five cycles of a charge/discharge result for 0.4 M V(acac)3, 0.5 M TEABF4 in acetonitrile. Coulombic, energy, and power efficiency for charge/discharge experiments were examined as a function of concentration to illustrate the effects of active species crossover. Efficiency and energy density were balanced to determine an optimal active species concentration range for operation of the battery. Lastly, the non-aqueous system was compared to the optimized aqueous all-vanadium system to identify areas of future work.


Experiment: First five cycles of a charge/discharge experiment for an all-vanadium non-aqueous redox flow battery chemistry. The system was charged at 3 mA until 50% theoretical state of charge and discharged at 2 mA until 0.4 V. The system shown is 0.4 M vanadium acetylacetonate supported by 0.5 M tetraethylammonium tetrafluoroborate in acetonitrile solvent. An H-cell configuration was used with graphite plate electrodes and a Neosepta AHA anion exchange membrane.

Preview Presentation:
Presenter(s):
Aaron A. Shinkle
Once the content has been viewed and you have attested to it, you will be able to download and print a certificate for PDH credits. If you have already viewed this content, please click here to login.

Can a Liquid Hydrogen Storage Tank BLEVE?
Abstract A BLEVE (boiling-liquid expanding-vapor explosion) occurs when a tank containing liquefied gas ruptures, resulting in the instantaneous release of the...
Green Diesel Production - An Overview
Currently, there are two renewable diesel fuels available: biodiesel and green diesel. The biodiesel or FAME is the transesterification of vegetable oil or...