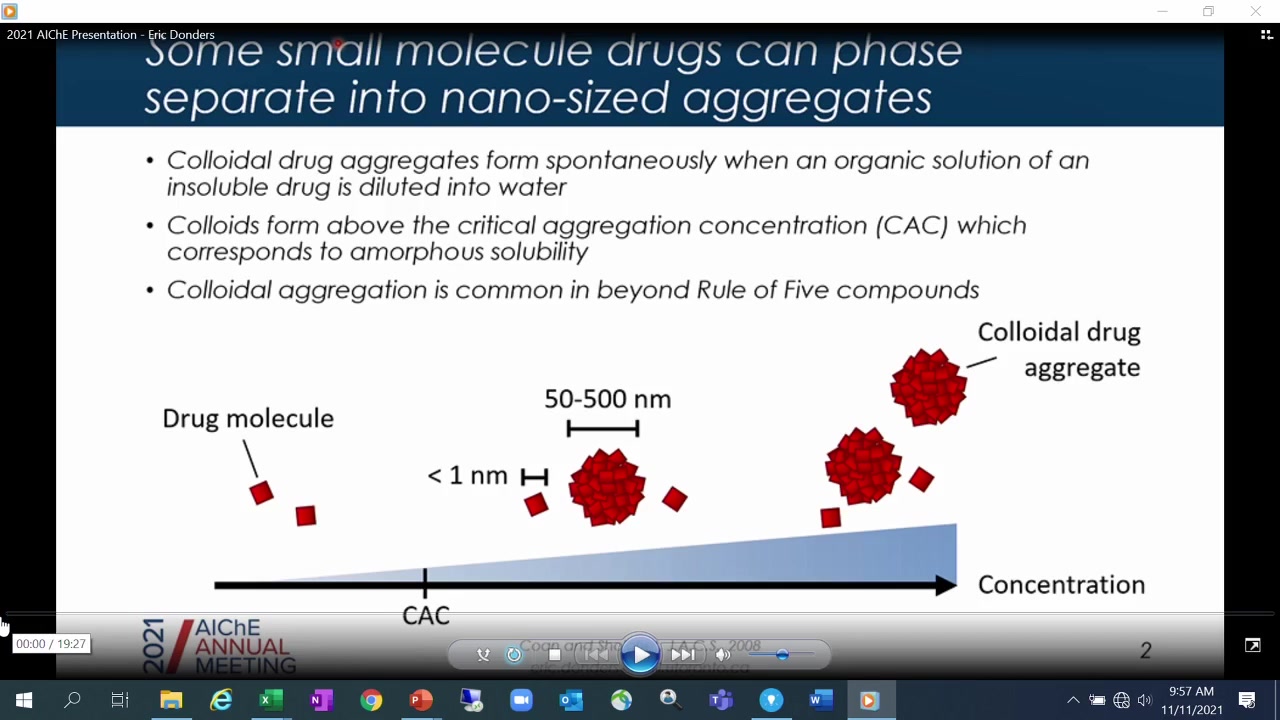 The discovery and development of new drugs is immensely costly, with the average cost of bringing a drug to market cited at more than $1 billion. Early in this process, thousands of candidates are tested against the desired target. Here it was discovered that the poor solubility of many candidate drugs causes them to form colloidal aggregates above a critical aggregation concentration. This behavior leads to both false positives in drug screening assays that rely on enzyme inhibition and false negatives in cytotoxicity assays. Such misleading results waste resources and so colloidal aggregation has traditionally been seen as a nuisance during drug development.

However, upon endocytosis, these colloids do not readily escape the endolysosomal pathway, resulting in sub-optimal efficacy. These developments have led to the new challenge of designing formulations that can escape the endosomes into the cytosol, resulting in optimal potency.

We hypothesized that colloid-forming drugs that are ionized in the acidic environment of the endolysosomal pathway could accomplish this objective by disrupting the integrity of the phospholipid membrane that separates the endolysosomes from the cytosol. This approach is supported by literature demonstrating that ionizable lipids, polymers, and small molecule drugs can cause membrane disruption through membrane fusion, osmotic pressure effects, or changes in lipid homeostasis.

To demonstrate this concept, we have previously formulated stable co-colloidal drug aggregates composed of two cancer drugs, fulvestrant and lapatinib, and demonstrated that lapatinib release can be triggered by acidification to endosomal pH. Transferrin-coated colloids facilitated uptake by cancer cells, and the acid-responsive ionization behavior of lapatinib in the colloids resulted in its release into the acidic endo-lysosomal pathway of cancer cells, leading to enhanced cytotoxicity.

Despite the success of this approach, it is limited to drugs that natively respond to changes in pH. In this work, we demonstrate a strategy to overcome this limitation by introducing pH-responsive functionality to a non-ionizable drug.

Fulvestrant, a breast cancer drug that forms colloidal aggregates that are not acid-responsive, was modified with different ionizable functional groups in a way that would preserve its bioactivity. Previous research has indicated that the estradiol core of fulvestrant is critical for its antiestrogen activity whereas the tail group tolerates some modifications. Therefore, the ionizable groups were attached onto the sulfur atom present on the tail of fulvestrant.

Next, the ionization behavior of these fulvestrant analogs at was evaluated as a function of pH, because ionization in the reduced pH of the endolysosomal pathway (pH ~4.5-6.5) is expected to be necessary for endosomal escape of colloidal drug aggregates. The pKa, a property that describes a moleculeâ€™s ionization state as a function of pH, was measured for each of the fulvestrant analogs using a fluorescence assay. This assay, which is commonly used to characterize ionizable lipids, determines pKa by measuring the fluorescence of added 6-(p-toluidino)-2-naphthalenesulfonic acid (TNS) over a range of pH values.

Fulvestrant analogues were then tested for formation colloidal drug aggregates. Solutions of each analog in dimethyl sulfoxide were optionally mixed with solutions of excipients and then a large excess of phosphate-buffered saline solution (PBS) was added. The addition of PBS causes drug phase separation into nano-sized aggregates with the stabilizing excipients coating their surfaces. The hydrodynamic diameter and polydispersity of colloidal drug aggregates were characterized by dynamic light scattering.

Finally, the ability of the fulvestrant analogs and their colloids to cause endosome disruption was tested. To test the endosome disruption activity of each analog in isolation, fluorescent galectin 8 reporter cells were treated with a low concentration of each analog for 24 h. Then, the ability of fulvestrant analog colloidal drug aggregates to escape from endosomes was measured. Colloids were formulated as detailed above with the addition of a hydrophobic dye to enable their visualization inside cells. Then, the reporter cells were treated with these formulations for 3 h and subsequently imaged to measure the extent of colloid uptake and endosome disruption.

Using a 5-step synthetic sequence, we successfully produced thirteen different fulvestrant analogs each containing a different ionizable functional group on its tail. We tested whether these analogs are still bioactive and found that they remained active against MCF7 cells with growth IC50 values below 10 nM. The potency of most of the analogs was not significantly different from the potency of the parent drug (IC50 close to 2 nM), validating our judicious selection of the site of modification.

We found that all the fulvestrant analogs formed colloidal drug aggregates above 1 µM, which is consistent with the behavior of the parent compound. Although colloids without any excipients formed large, polydisperse aggregates in PBS, we found that 100 nm colloids with polydispersity indices less than 0.2 could be consistently formulated when small amounts of stabilizing excipients were added before formation of the colloids in PBS. The drug loading of these formulations exceeded 50% which is consistent with our goal to minimize excipient burden.

After infecting the parent cell line with lentivirus encoding a fluorescent mCherry-galectin 8 fusion protein and selecting for transfected cells with puromycin, we isolated a population of cells that consistently express the fluorescent fusion protein over multiple passages. We verified that the fluorescence was spread throughout the cytosol of untreated cells but distributed in a punctate pattern in cells whose endosomes and lysosomes were disrupted by siramesine, a known lysosomotropic drug.

We were excited to find that many of the fulvestrant analogs disrupted endosomes. Measuring the extent of endosome disruption by the fulvestrant analogs, we found that there was a striking correlation between pKa and endolysosomal disruption, with analogues having a pKa between 7 and 8 disrupting the greatest number of endosomes per cell. This result was consistent with the known endosome disruptor siramesine which we found to have a pKa of 7.4.

When treating cells with colloidal drug aggregates containing the ionizable fulvestrant analogs, we observed robust uptake and endosomal escape. The number of disrupted endosomes was reduced when colloid endocytosis was blocked, confirming that the observed endosome disruption was caused by endocytosed colloids. Colocalization between colloids and disrupted endosomes further demonstrated that these colloids can disrupt the integrity of the endosomes that contain them. These results suggest a fusion or leakage mechanism of release where the colloid does not escape the endosome intact but may still release its cargo into the cytosol.

This work demonstrates a widely applicable strategy for achieving endosomal escape of colloidal drug aggregates. Beyond this goal, the proposed work has broad implications in drug development and nanomedicine. Current dogma focuses on optimizing drugs for systemic delivery as individual small molecules, but these formulations are hindered by limited solubility and toxic excipients. By delivering drugs as pH-sensitive, stable colloids, the use of excipients can be reduced, and dosing limitations can be overcome. This new way of looking at colloidal drug aggregates addresses an issue that continues to plague drug development for multiple disease areas. With our platform technology, we aim to change drug design and delivery. 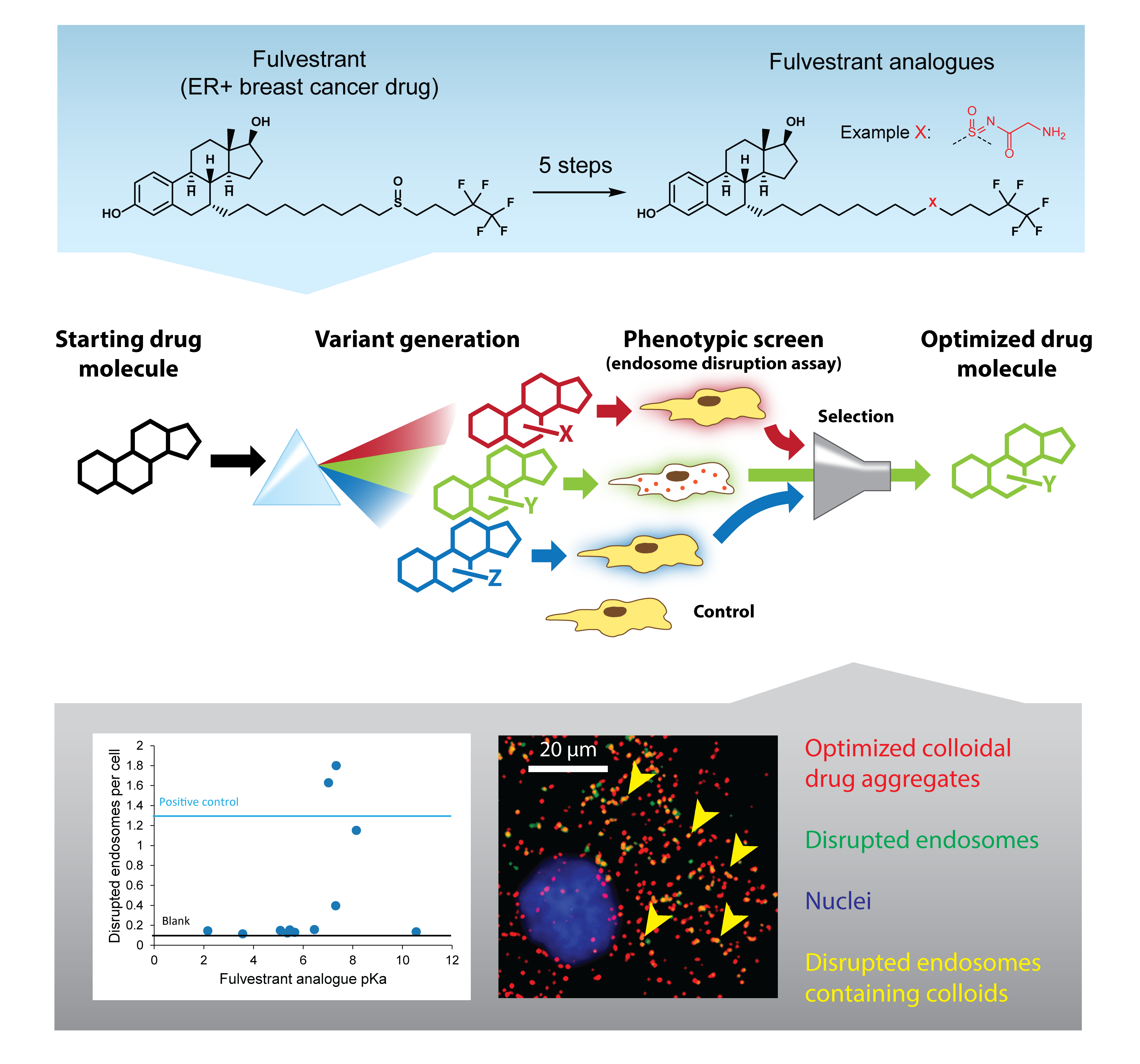 Preview Presentation:
Presenter(s):
Christian Dank
Eric Donders
Ahil Ganesh
Mark Lautens
Brian Shoichet
Molly S. Shoichet
Kai Slaughter
Once the content has been viewed and you have attested to it, you will be able to download and print a certificate for PDH credits. If you have already viewed this content, please click here to login.

Application of An Advanced Process Controller to a Continuous Mixing, Direct Compression Process
A Model Predictive Controller (MPC) has been applied to a pilot-scale continuous mixing , direct compression manufacturing process. This process consists of...
AIChE Annual Meeting 2011 Recording Bundle - Quality by Design (QbD) in Pharmaceutical Discovery, Development, and Manufacturing
Get all 45 recordings for one low price. These papers, delivered during the 2011 AIChE Annual Meeting detail theoretical models and experimental studies on...