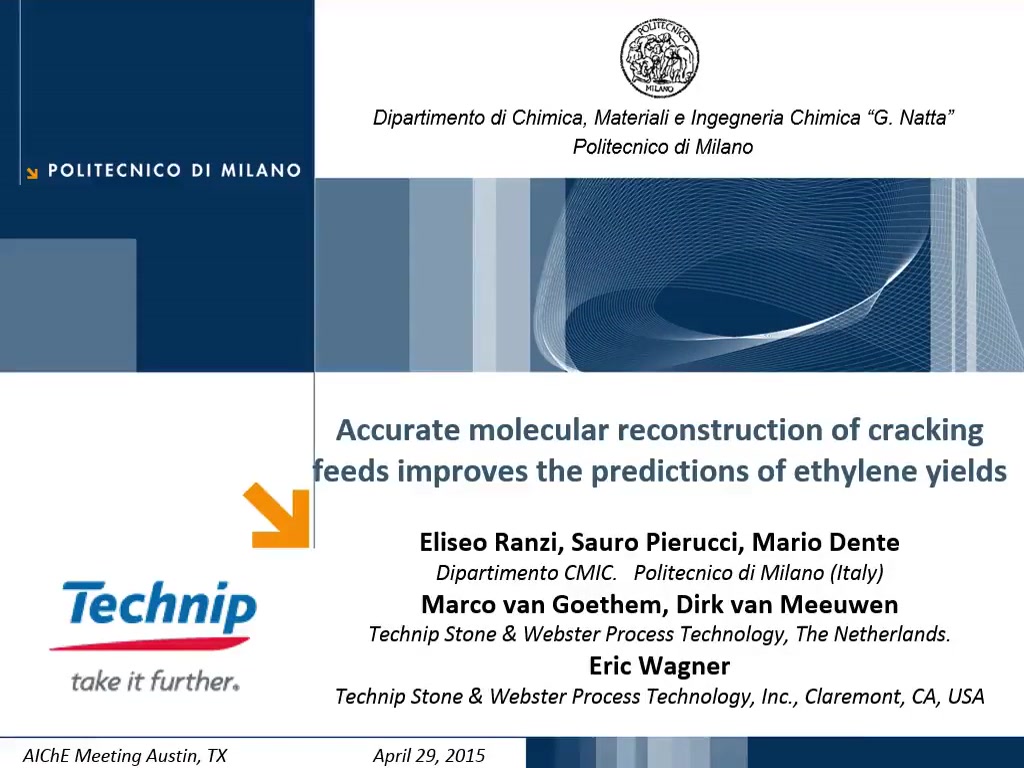 Accurate characterization of petrochemical feeds plays a crucial role in describing the different pyrolysis pathways and reactivity of the various isomer species. The isomer distribution is proved to have a critical role in characterizing product yields. Isomers with almost identical physical properties, such as the isomers of branched alkanes and cyclo-alkanes, can exhibit very different cracking behaviors, and hence, a poor estimate of their internal distribution can significantly affect the ethylene yield predictions. Thus, the horizontal lumping, i.e. the grouping of species with the same molecular weight, becomes as critical as the vertical one. Despite recent advancements of analytical techniques, a satisfactory molecular description cannot be obtained simply from these methods and the molecular reconstruction of the feedstocks needs to rely also on other bases. This paper emphasizes the role of the probability of methylation and alkylation inside the families of homologous hydrocarbons. For the first time, the importance of the internal distribution in the molecular feedstock reconstruction is highlighted. For these purposes, SPYRO® kinetic model has been revised and extended to more than 600 species, covering a large detail of feed components, and it is now able to properly show and quantify the effect of isomer distributions on cracking yields.

Since its introduction in the 1990s, comprehensive two-dimensional gas chromatography has demonstrated very promising perspectives for the analysis of complex hydrocarbon mixtures. The main reason lies in the higher peak capacity obtained with the combination of two chromatographic columns that develop complementary selectivities so that the entire sample is analysed with two orthogonal separations. Both reverse and normal column combination are useful to characterize the hydrocarbon composition of liquid fuels. In general, six hydrocarbon classes (n-paraffins, iso-paraffins, cyclo-paraffins, mono-, di- and poly-aromatics) can be identified and quantified using flame ionization detectors. While the boiling curve and GCxGC analysis give important information on molecular weight distribution, the quantification of the individual isomers remains more difficult. In the meantime, it is possible to observe a relative regularity in the internal distribution of the isomers inside the different fractions of virgin feedstocks. To give an example, the description of the whole fraction of isomers of branched-alkanes with eight C-atoms needs only a few isomers: ethyl-hexane, three mono-methyl-heptanes, and four dimethyl-hexanes with a tertiary C structure. In spite of the different origins of these feeds, there is clear regularity with regard to their composition. In fact, methyl-heptanes prevail over dimethyl-hexanes and ethyl-hexanes. Trimethyl-pentanes are less abundant and quaternary C atoms are of very limited importance. On this basis, it was possible to empirically derive the internal distribution of the isomer mixture, simply based on the probability of methylation, and or different alkyl substitutions along the carbon chain. GC analysis of heavy naphtha, kerosene and light gasoils indicates the prevailing presence of poly-isoprane structures characterized by an average probability of methyl substitution of about 0.20-0.30. Of course, these internal distributions remain a rough approximation, they are a peculiarity of the virgin fractions and can drastically change after thermal or catalytic refinery processes. Moreover, it seems quite important to extrapolate and validate these assumptions and approach to higher fractions.

Unfortunately, accurate and detailed analysis of different isomers for branched alkanes and cyclo-alkanes with more than 10 C-atoms are very scarce in the literature. A carefully executed investigation to the selection of surrogates for jet fuels states the average distribution of substituents in iso-paraffins, cyclo-paraffins and aromatics, based on literature data complemented by NMR analysis. That investigation indicates a higher methylation probability for the iso-paraffin compounds, as well as for the aromatic fractions. From the NMR data of the investigation constraints can be observed on the number of side chain substitution on aromatic carbons, as well as on the length and branching of the substituents. The suggested surrogate composition of aromatics with 10 C-atoms, all substituents but one being methyl, was about 20% ethyl-toluene, 5% propyl-toluene, 55% ethyl-xylene, and 20% propyl-xylene.

Panel a) of Figure 1 shows the estimated internal distribution of branched alkanes C10 in terms of the relative amounts of methyl-nonanes, di-methyl-octanes, ethyl-octanes, and tri-methyl-heptanes as a function of the methylation degree. There is a clear increase of poly-methylated compounds, with a decrease of the mono substituted species. Note that these distributions refer to a fixed probability of ethyl substitution of ~ 10%. Panel b) of the same figure shows the predicted cracking yields, as obtained in conventional pyrolysis coils, at standard operating conditions. As expected, the increase of the methylation degrees corresponds to a net decrease of about 3% of ethylene yields with a parallel increase of methane, propylene, and C5+ components. These significant differences in ethylene yields justify the efforts of a better investigation of the effect of the internal distribution of different isomers, not only inside the branched paraffins, but also with respect to the cyclo-paraffins, where the internal ratio between 5- and 6-membered rings constitutes a further parameter for the correct internal isomer distribution.

This study confirms the importance of highlighting a limited number of intrinsic parameters useful for the proper characterization of the internal distribution of isomers, inside the different hydrocarbon classes. The probability of methylation and different alkylation on the carbon chain, the average length of side substitutions on the rings as well as the relative presence of cyclo-hexane and and cyclo-pentane structures (as well as the one of tetraline and indane), constitute a limited number of freedom degrees, mainly dependent on the origin of the feed.

Due to the current computer facilities, it is now convenient to enlarge the kinetic scheme by including several individual isomers, still maintaining the empirical distribution rules, when analytical and detailed data are not available. This approach allows enlarging the range of applications of the kinetic model. For instance, the decomposition of a particular structural isomer can be individually investigated. Furthermore, the lumping rules inside the individual isomeric fractions can be tailored in a very effective way, based on a limited number of intrinsic characterization factors depending on the actual liquid feed. Finally, further advancements in revised and combined GCxGC analysis are expected to reveal in the near future more detailed chemical structures, which could assist in a more comprehensive identification of these freedom degrees. They are not simply adaptive or empirical factors, but intrinsic characterization parameters, a molecular finger print of the different petroleum fractions.

Preview Presentation:
Presenter(s):
Eliseo Ranzi
Once the content has been viewed and you have attested to it, you will be able to download and print a certificate for PDH credits. If you have already viewed this content, please click here to login.

Engineering Aspects of an Actinide/Lanthanide Separation Concept Based on the Oxidation of Americium
The separation of Am from the lanthanides and curium is a key step in proposed advanced fuel cycle scenarios. The partitioning and transmutation of Am...
LNG Safety - II
This session presents advancements in LNG safety in LNG baseload and receiving terminals, LNG ships and other related areas. LNG Vapor Dispersion Consequence...