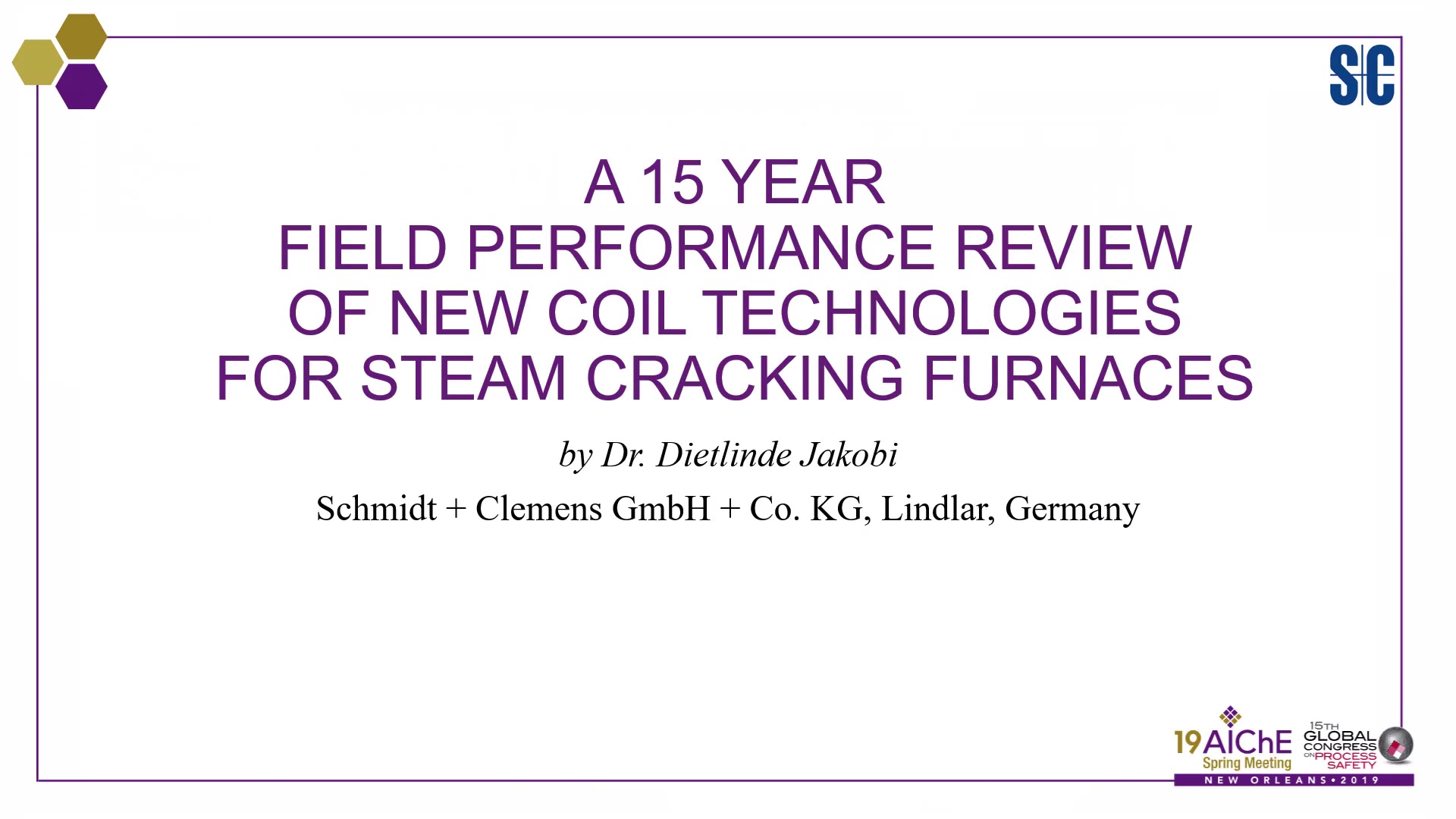 Radiant coils in steam-cracking furnaces operate under severe and alternating reducing and oxidizing conditions at temperatures even beyond 1100 °C. Therefore, cast alloys installed in the radiant section need to provide apart from high creep strength also good resistance to corrosion attack as well as excellent catalytic coking resistance. The coil components (centrifugally cast tubes, cast fittings) must be able to form on the inner surface a dense and continuous oxide layer which does not include any catalytically active sites leading to the formation of coke filaments.

Over several decades, iron and nickel based chromia forming alloys were installed in the steam cracking furnace and 15 years back also alumina forming alloys were introduced to the industry. New insights on the interactions between protective oxide scales formed on such chromia and alumina forming alloys and the highly reactive cracking atmospheres allow further understanding on the degradation mechanism as well as the coking behavior. Sulfur present in the feedstock as natural constituent or added deliberately is also strongly influencing the coking rate and material deterioration. As a conclusion, chromia forming high temperature alloys have a limited resistance against corrosion and also against coking in steam cracking conditions, the limitation being set by thermodynamics. Due to a far better thermodynamic stability, alumina scales like formed on the alloy CentralloyÂ® HT E are favorable as protection in such severe conditions.

The â€œSCopeâ€ internally profiled tube design was developed beginning of the 21st century and the benefits predicted in the simulations were validated in plant applications. The SCope profile leads to a very uniform, circumferential flow pattern which is improving the heat transfer, balancing the heat distribution in the gas phase as well as in the tube shell leading to reduced tube metal temperatures â€“ all of these properties decreasing the coking rate. This profile can be individually designed to the needs, e.g. regarding increased conversion or ethylene yield, maximum energy efficiency of the furnace, longer maintenance intervals or minimum downtime of your steam cracker and additionally an increased coil life.

In order to maximize the operational benefit of the plant, the innovative SCope profile can be combined with the proven Centralloy® HT E tube material.

Performance studies and results from metallurgical investigations carried out on the alumina forming alloy Centralloy® HT E exposed for several years to service conditions in the steam cracking furnace will be presented as well as results from field applications with the SCope profiled tube design. Apart from the metallurgical aspects, this presentation will focus on the increase in energy efficiency of the steam cracking furnace resulting from technologies to minimize coke formation.

Preview Presentation:
Presenter(s):
Dietlinde Jakobi
Once the content has been viewed and you have attested to it, you will be able to download and print a certificate for PDH credits. If you have already viewed this content, please click here to login.

Using Alarms As a Layer of Protection
Alarms and operator response are one of the first layers of protection in preventing a plant upset from escalating into a hazardous event. This presentation...
Mole Sieve Steam Deactivation
At the Dow Fort Saskatchewan hydrocarbons plant, the cracked gas dryers are critical to remove moisture from the cracked gas stream in order to meet product...