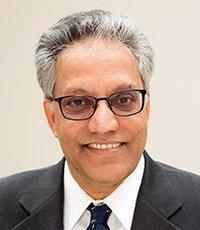 Sankaran Sundaresan received his B. Tech in Chemical Engineering from the Indian Institute of Technology, Madras, in 1976. After receiving his Ph.D. in the same field in 1980 from the University of Houston, he joined the faculty at Princeton University, where he is now the Norman John Sollenberger Professor of Engineering. He served as The Associate Dean for Academic Affairs in the School of Engineering and Applied Science during 1997 – 2003.

Over the years, his multiphase flow research group at Princeton has studied the origin of hydrodynamic instabilities and the hierarchy of nonuniform structures that arise in granular flows, gas-liquid flows in trickle bed reactors, fluid-particles flows, and gas-liquid bubble column reactors.  His research group has also studied problems dealing with catalyst dynamics, chemical reactor dynamics, environmentally benign catalysis, plasma-assisted catalytic reactor analysis, and desalination. His current research is focused on the effect of interparticle forces on fluid-particle flows and plasma-assisted catalytic reactor analysis.

He served as an Associate Editor of the American Institute of Chemical Engineering Journal and several editorial boards. He has been recognized with several awards and honors, including the Richard Wilhelm Award in Chemical Reaction Engineering and the Thomas Baron Award in Fluid Particle Systems from the AICHE,  President’s Award for Distinguished Teaching and Graduate Mentoring Award from Princeton University, The Alexander von Humboldt Research Award, and visiting appointments as Moore Distinguished Scholar at California Institute of Technology, JM Burgers Visiting Professor of Fluid Mechanics at TU Delft and Distinguished Professor at the Indian Institute of Technology – Madras. He has delivered several named lectures, including the Neal Amundson Lecture at the University of Houston, named after his Ph.D. advisor.

Exelus, Inc., with whom he has been associated for nearly two decades, has developed technologies for solid acid-catalyzed alkylation and propane dehydrogenation, licensed exclusively by KBR as K-SAAT and K-PRO processes.