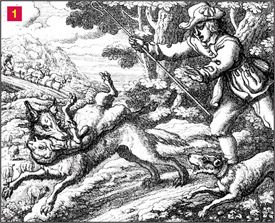 Aesop’s Fable The Boy Who Cried Wolf tells the story of a shepherd boy who repeatedly tricks villagers into thinking a wolf is attacking his sheep. The villagers grew wise to the trick and began ignoring the boy’s cries for help. When a wolf did actually appear and the boy called for help, everyone assumed it was another false alarm. With no help to save the sheep, the wolf enjoyed a sheep dinner (Image 1). In some versions of the fable, the wolf also ate the boy, which is an appropriate analogy for the potential consequences of ignoring alarms in the process industries.

Alarms that actuate because of faulty sensors or because the alarm limit is set too close to normal operating conditions frequently provide false alarms. It is difficult to tell when these unreliable alarms are warning of a real deviation that requires action. Nuisance alarms indicate minor process deviations that do not require a response. If a display is crowded with many nuisance alarms, operators may fail to notice a real alarm that requires action. 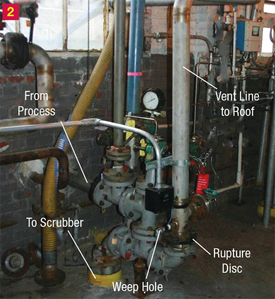 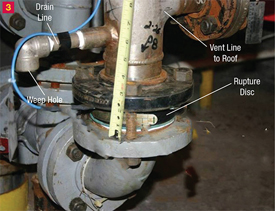 The U.S. Chemical Safety Board (CSB) investigated a 2010 chemical release at a plant in West Virginia that involved an ignored alarm (Images 2 and 3). A rupture disc on a reactor containing methyl chloride — a toxic and flammable gas — burst, releasing methyl chloride to a vent line. The rupture disc was designed to trigger an alarm if it burst. The alarm had a history of faulty operation, often signaling a burst disk when it should not have. Operators, however, were not aware that the device had been upgraded, and assumed the signal was yet another false alarm.

Don’t ignore safety alarms — there might really be a wolf!

©AIChE 2017. All rights reserved. Reproduction for non-commercial, educational purposes is encouraged. However, reproduction for any commercial purpose without express written consent of AIChE is strictly prohibited. Contact us at ccps_beacon@aiche.org or 646-495-1371.

The Many Applications of Biomolecular Engineering

The discipline of biomolecular engineering focuses on the interface between molecular biology, biophysical chemistry, and chemical engineering — with the goal to translate our fundamental understanding of molecular biology into useful therapies, devices, and processes. Applications of this...

A Materials Approach to Vaccines as Therapies

The widespread adoption of vaccines over the last two centuries has transformed medicine by preventing infectious disease. In the future, so-called therapeutic vaccines could be used as effective treatments for cancer and autoimmune disorders — ushering in a new era of medicine.

Adoptive T-cell therapy is a personalized cancer treatment that has the potential to cure previously untreatable malignancies. Researchers are applying techniques in biomolecular engineering and synthetic biology to the development of next-generation therapeutic T cells with improved safety and...

Proteins could transform the chemical process industries if they could be engineered to facilitate the production of biofuels, molecular medicines, and other specialty chemicals. This reality is nearing as expanded knowledge of proteins and improvements in computational tools are making it possible...

There’s Plenty of Room at the Bottom of a Cell

Single-cell RNA sequencing is giving engineers and scientists the ability to better understand and manipulate the smallest unit of a living organism — the single cell. This technique has already ushered in breakthroughs in biology and medicine. However, challenges and opportunities abound.

SBE Update: The Many Applications of Biomolecular Engineering; A Materials Approach to Vaccines as Therapies; Engineering Cancer-Fighting T Cells; There's Plenty of Room at the Botton of a Cell; Computational Protein Engineering; Plant Metabolic Engineering for Chemicals, Fuels, and Precursors

Steam Trap Management: Do Something; Anything. Please!

Propylene oxide (PO) is a major commodity chemical used to produce intermediate chemicals, such as propylene glycol, polyether polyols, and polyurethanes, that go into a variety of end products, including coatings, adhesives, furniture foams, and automobiles. A California-based startup has developed...

Jonas Korlach is the Chief Scientific Officer (CSO) of Pacific Biosciences (PacBio) and one of the co-inventors of the company’s Single Molecule, Real-Time (SMRT) Sequencing technology, which drastically improves the accuracy and speed of DNA sequencing.

The ChE in Context: Advanced Manufacturing in Chemical Engineering

Career Corner: Speaking Up in Meetings