Plants are the ultimate source of foods, fibers, pharmaceuticals, and fuels. This article discusses the metabolic engineering of plants to produce fuels and value-added chemicals, with a focus on the general concepts and challenges that differentiate plant and microbial engineering. Two examples of successful metabolic engineering of plant traits are highlighted, and emerging techniques to prevent transgene release into the wild and to advance the speed of the design-build-test cycle are discussed.

Conversion schemes for commodity chemicals and fuels from plant biomass 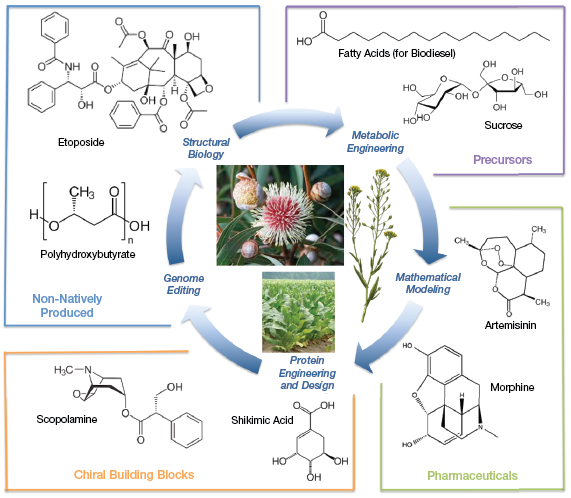 Plant biomass is an output of carbon dioxide, sunlight, water, and soil-derived nutrients. This biomass can be used directly or indirectly for fuels and value-added chemicals (Figure 1).

For thousands of years, pharmacologically active molecules have been extracted from plants, including opioids from poppies and antimalarial medicines such as artemisinin from Chinese wormwood. Today, chiral building blocks are sourced from plants for a variety of pharmaceuticals. For example, shikimic acid is produced in anise seeds for the synthesis of the antiviral oseltamivir (marketed as Tamiflu) (1) and scopolamine is extracted from corkwood leaves for synthesis of various bronchodilators (most notably tiotropium, which is marketed as Spiriva) (2).

Plant biomass can be converted to biofuel using physicochemical and/or enzymatic treatments to break it down into sugars, followed by upgrading via fermentation or chemical catalysis. Diesel and jet fuel can be prepared from seed oils from palm trees or plants like Camelina sativa. Finally, fast-growing plants like tobacco can be genetically engineered to accumulate value-added chemicals (3) and drugs (4). Thus, there is a wide diversity of feedstocks and speciality chemicals that originate in plants.

Comparing products made by engineered plants and microbes

Not every chemical can be produced by plants. One major issue is volatility: many plant-produced volatile compounds leak into the atmosphere, making collection difficult. Take, for example, the C5 monomer isoprene, which is used in rubber. Although trees and other plants emit over 500 million tons of isoprene annually, little is left in plant biomass (5). It is much easier to recover volatiles for downstream purification from off-gases in closed fermentation vessels. To that end, Danisco, in collaboration with Goodyear, has developed a bioprocess for production of isoprene using metabolically engineered E. coli (6). Researchers have implemented several strategies to mitigate the escape of plant-produced volatiles, including adding a protecting group or handle to keep the molecule inside of the plant (7) and redirecting biosynthesis to plant subcompartments.

Another issue is compound toxicity that can limit plant yields. This is the case for classical fermentation products — such as citric acid and ethanol — that can be produced by fermentation at near-quantitative yields and high product titers. Even though many plants naturally produce many of these compounds (e.g., citric acid in citrus fruits), the process of extracting and purifying these products from diffuse point sources is economically less favorable than fermentation using inexpensive sugar sources like beet molasses.

However, in many cases it is more desirable to produce biofuels or bioproducts directly in the host plant. Biodiesel is one such example. For example, the nonfood oilseed crop Camelina can yield two metric tons of biodiesel with approximately 40% by weight lipids per hectare. Seed lipids are trapped in oil bodies that can be recovered and hydrotreated to yield a renewable diesel that is interchangeable with petroleum-derived diesel. Alternatively, the recovered lipids can be subjected to catalytic cracking to alter the distribution of chain lengths to the appropriate range for jet fuel and gasoline. In general, products accumulate at high abundance if they are part of the reproductive strategy of the organism — oil accumulation in the seeds, sucrose in beets and sugarcane, and so forth.

A large engineering gap exists between plants and microbes

The plant metabolic engineer has many...

The Many Applications of Biomolecular Engineering

The discipline of biomolecular engineering focuses on the interface between molecular biology, biophysical chemistry, and chemical engineering — with the goal to translate our fundamental understanding of molecular biology into useful therapies, devices, and processes. Applications of this...

A Materials Approach to Vaccines as Therapies

The widespread adoption of vaccines over the last two centuries has transformed medicine by preventing infectious disease. In the future, so-called therapeutic vaccines could be used as effective treatments for cancer and autoimmune disorders — ushering in a new era of medicine.

Adoptive T-cell therapy is a personalized cancer treatment that has the potential to cure previously untreatable malignancies. Researchers are applying techniques in biomolecular engineering and synthetic biology to the development of next-generation therapeutic T cells with improved safety and...

Proteins could transform the chemical process industries if they could be engineered to facilitate the production of biofuels, molecular medicines, and other specialty chemicals. This reality is nearing as expanded knowledge of proteins and improvements in computational tools are making it possible...

There’s Plenty of Room at the Bottom of a Cell

Single-cell RNA sequencing is giving engineers and scientists the ability to better understand and manipulate the smallest unit of a living organism — the single cell. This technique has already ushered in breakthroughs in biology and medicine. However, challenges and opportunities abound.

SBE Update: The Many Applications of Biomolecular Engineering; A Materials Approach to Vaccines as Therapies; Engineering Cancer-Fighting T Cells; There's Plenty of Room at the Botton of a Cell; Computational Protein Engineering; Plant Metabolic Engineering for Chemicals, Fuels, and Precursors

Steam Trap Management: Do Something; Anything. Please!

Propylene oxide (PO) is a major commodity chemical used to produce intermediate chemicals, such as propylene glycol, polyether polyols, and polyurethanes, that go into a variety of end products, including coatings, adhesives, furniture foams, and automobiles. A California-based startup has developed...

Jonas Korlach is the Chief Scientific Officer (CSO) of Pacific Biosciences (PacBio) and one of the co-inventors of the company’s Single Molecule, Real-Time (SMRT) Sequencing technology, which drastically improves the accuracy and speed of DNA sequencing.

The ChE in Context: Advanced Manufacturing in Chemical Engineering

Career Corner: Speaking Up in Meetings