Continuous perfusion cultivation technology has been used for decades to manufacture unstable molecules (e.g., blood factors and enzymes), allowing for rapid removal of those molecules from the bioreactor to avoid degradation. And interest in it is growing, as the advantages of continuous perfusion, even for stable molecules, become more widely recognized. Manufacturers are now considering perfusion cultivation as a method of process intensification to increase volumetric productivity. But despite the promise of perfusion-based processing, a shift from fed-batch to continuous perfusion will likely be gradual, considering the success of the fed-batch approach and the fact that most of the installed manufacturing capacity is fed-batch.

Biopharmaceuticals represent a rapidly expanding segment of the pharmaceuticals industry, with more than 230 approved products and global sales of more than $125 billion (1). The majority of those products are complex proteins, including monoclonal antibodies, hormones, growth factors, fusion proteins, and cytokines (2). Cultured mammalian cells are predominantly used to manufacture biopharmaceuticals, because they are amenable to complex post-translational modifications, especially glycosylation, which are critical for the biological response of the drugs (3).

Mammalian cells are typically cultivated by fed-batch manufacturing methods. The first applications of fed-batch cultivation were fungal fermentation more than four decades ago (4) and the culturing of mammalian cells in the 1980s (5). Two to three decades ago, relatively large (10,000–20,000 L) fed-batch bioreactors were constructed to meet increasing demand for biopharmaceuticals (6); fed-batch manufacturing retains the simplicity of batch operation but has much higher productivity. With subsequent approval of other biopharmaceutical therapeutics, manufacturers invested billions of dollars to rapidly install additional capacity (7).

Such large investments in commercial manufacturing laid the groundwork, and the majority of biopharmaceuticals are now manufactured in fed-batch processes. To minimize time to commercialization and to leverage installed capacity, new molecules were designed so that they could be manufactured on existing commercial equipment (8). Consequently, more than 2 million L/yr of manufacturing capacity, most of it fed-batch, exists today, and the total is expected to increase to about 4 million L/yr by 2017 (9). Fed-batch biomanufacturing has been very successful over several decades for producing many biopharmaceuticals (10), and existing manufacturing facilities are equipped with advanced process monitoring and control technology (11). Those facilities will continue to reliably manufacture products for years to come.

Thus, biopharmaceutical makers are unlikely to immediately abandon their fed-batch processes. However, when current equipment has reached the end of its useful life, companies have an opportunity to explore other bioprocessing methods, such as perfusion cultivation. In addition, new entrants with no prior investments in installed capacity can choose a manufacturing mode (or combination of modes) that is best suited for their product portfolios.

The billions of dollars in capital investment and the multiple years it takes to bring a new fed-batch facility online will not be feasible in the rapidly evolving biopharmaceuticals industry as pressures on timelines and costs continue to increase. In addition, companies will need to adopt manufacturing technologies (such as continuous perfusion) that are compatible with the evolving industry, which is characterized by increasingly complex molecules and intensifying competition from innovative and biosimilar products.

A perfusion reactor is similar to a chemostat — i.e., a bioreactor in which the chemical environment is static. In a chemostat bioreactor, fresh medium is continuously added while liquid containing unused nutrients, metabolic products, and cells are continuously removed at the same rate to keep the culture volume of the reactor constant. A perfusion bioreactor, on the other hand, retains the cells in the reactor. 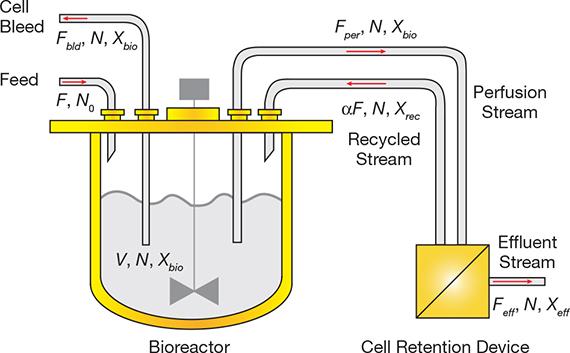 A typical perfusion system (Figure 1) includes a cell retention device and operates at a constant bioreactor volume and cell density by continuously removing the product from the bioreactor at a constant rate. Feedback control via a cell bleed pump maintains the constant cell density, and fresh cell culture medium is added to maintain the constant bioreactor working volume. Such an operation ensures relatively constant nutrient and metabolite concentrations in the reactor.

A critical component of a perfusion system is the cell retention device. The product stream from the bioreactor continuously feeds into that device, where it is separated into two streams: a concentrated biomass stream, which is recycled back to the bioreactor; and a relatively cell-free product-containing stream, which is further processed for complete cell removal and product purification.

Various cell retention devices have been developed over the past half-century, from the early spin filters of the 1960s (12) to newer technologies such as hollow-fiber modules (13), crossflow filters (14), tangential-flow filters (15), centrifugation devices (16), gravitational settlers (17), inclined-sedimentation devices (18), acoustic filters (19), hydrocyclones (20), and alternating tangential-flow filters (21). Cell retention devices can be classified into three general categories based on their principle of separation: filtration, gravitational settling, and centrifugation (22). Such devices differ in capacity, performance, and scale-up potential, and must be chosen appropriately to meet the needs of each application.

Perfusion cultivation differs from fed-batch cultivation in four primary ways, which have implications across a wide spectrum of activities including cell line and process development, capital investment, and commercialization strategies.

Product residence-time modulation. The product residence time can be modulated in a perfusion-based bioreactor by adjusting the perfusion rate (Fper). This is especially important for unstable molecules, such as blood factors, which have half-lives on the order of a few hours at the elevated temperatures used in cell cultivation. It is virtually impossible to produce such products in a conventional fed-batch process, where the product is withdrawn from the bioreactor only once, at the end of the culture (after about two weeks).

Extended culture duration. In contrast to fed-batch cultivation, where the entire bioreactor content is harvested and purified once at the end of the run, a perfusion bioreactor can...

Editorial: A Vote for Science and Engineering

Patent Update: Patent Validity Could Come Down to Clarity

Railroad crossings that are not protected by gates or warning lights typically include signs to alert you of the potential for danger. Versions of the sign all have one thing in common — the reminder to stop, look, and listen. Only after stopping before crossing the tracks, looking in both...

Emily Leproust, CEO and co-founder of Twist Bioscience, is reinventing the wheel when it comes to DNA synthesis. “I have one goal with respect to DNA synthesis — that’s to make cloning obsolete,” she says. ...