As a science of material structure and transformation, chemistry has fascinated French scientists for centuries. Antoine Laurent Lavoisier, who coauthored the first chemical nomenclature system, is considered the leader of the chemicals revolution at the end of the 18th century. Lavoisier is also credited with solving the mysteries of the composition of air. During the second half of the 19th century, Marcellin Berthelot opened the way to organic synthesis and its numerous industrial applications. Just before the turn of the century, Marie Curie discovered radioactivity, which led to a better understanding of the atom. And in 1913, Paul Sabatier developed a theory of catalysis, specifically a catalytic mechanism that involves intermediates. Sabatier’s work laid the groundwork for today’s industrial catalysis.

As the birthplace or adopted home of many of the world’s greatest chemists, France is one of the most important countries for fundamental and applied research in this field. By no coincidence, French scientists have won six Nobel prizes for chemistry. 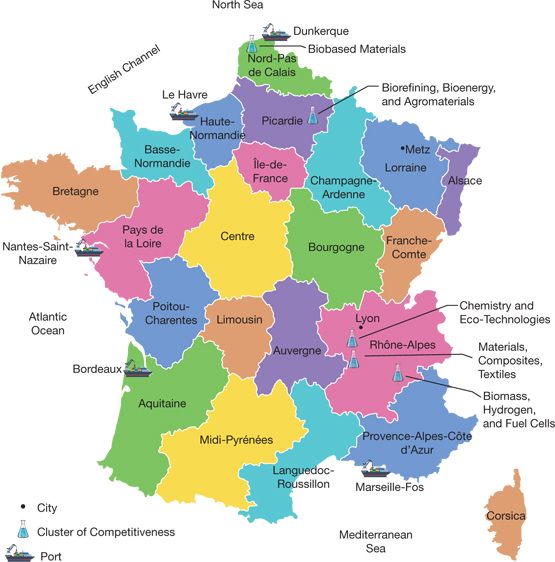 ▶Figure 1. France is divided into 22 regions, plus the island of Corsica, and five overseas regions (not shown here). The chemicals industry is spread across most of France, with clusters of innovation located in several regions.

Early French chemical companies include Rhône Poulenc, Pechiney, and Saint Gobain, which were located near Lyon in the east and Metz in the northeast (Figure 1). The presence of coal mines and available hydroelectricity made these areas of France particularly attractive to chemical companies. Petrochemicals companies, on the other hand, established themselves in areas close to seaports, Le Havre in Normandy and Marseille in the south.

Both a science and an industry, chemistry occupies a central place in France’s economic landscape. The chemicals industry (including fine chemicals for pharmaceuticals) is among the top three leading industrial sectors, with net sales (global turnover) of $110 billion in 2014 and direct employment of 156,600 people. The industry ranks second-largest in Europe and sixth in the world

A portfolio of chemicals

France’s chemicals industry is composed of about 3,500 companies producing a wide range of chemicals — 30,000 different molecules across basic, specialty, and fine chemicals (Figure 2, Table 1). French chemical businesses are distributed throughout the country, but are more concentrated in certain areas than others. For example, chemicals-focused competiveness clusters (1), which bring together companies, research laboratories, and academic establishments to work cooperatively with one another around a certain theme, have developed in several regions, including a biobased materials cluster in Nord-Pas-de-Calais, a cluster focused on biorefining, bioenergy, and agromaterials in Picardie, and several competitiveness clusters in the Rhône-Alpes region, including one for materials, composites, and textiles, a cluster focused on chemistry and eco-technologies, and a cluster centered around biomass, hydrogen, and fuel cells. 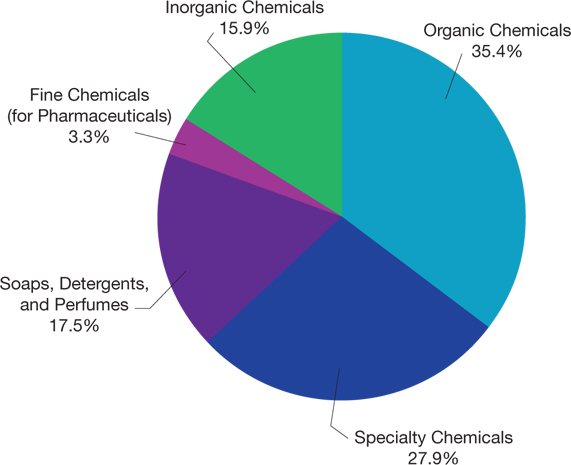 ▲Figure 2. The chemicals industry in France produces a wide range of chemicals. Source: (2).

The specialty chemicals sector in France employs more than 40,000 people in 874 companies of various sizes, including 300 small-to-medium entities (SMEs).

France is the largest agricultural producer in Europe, and therefore is a strategic market for major global companies that specialize in crop protection chemicals. Many of the international producers of crop protection chemicals have established subsidiaries in France. The agriculture sector employs 5,400 people and had sales of $7.9 billion in 2014, half of which were exports.

Production of carbon fiber, a specialty chemical supplied to the aeronautical industry, is increasing rapidly in France. Global demand for carbon fiber is expected to grow by 10% per year and reach 100,000 m.t./yr in 2025. Toray, an integrated chemicals group with manufacturing facilities in France, Japan, South Korea, and the U.S., is well-positioned in the carbon fiber business. Hexcel recently announced a $200-million investment for a new carbon fiber facility in Europe to be located near Lyon.

Several French holding companies, including Minakem Group, Novacap Group, and Arkema Group, have diversified into the production of fine organic chemicals for the pharmaceuticals, cosmetics, and electronics industries.

The largest chemical companies in France in terms of revenue in 2014 are listed in Table 2.

France has attracted foreign investment from international chemical companies. Non-French companies account for about 40% of the country’s chemicals production and about 50% of chemicals companies with more than 250 employees, including BASF, Bayer, Dow Chemical, DuPont, ExxonMobil Chemical, Ineos, PPG, and Solvay.

France is also the world’s leading exporter in the perfumes and cosmetics industry, with global turnover of $18.9 billion (2014), $16.7 billion of which is exported.

▲Figure 3. France is a major exporter of chemicals to many regions of the world. Source: (4).

The chemicals industry is France’s leading export industry, with 65% of chemicals sales exported across the globe (Figure 3). France exports more than it imports. Its trade balance, recording a large surplus, was worth $9.9 billion in 2014, with $72.9 billion of exported chemical products vs. $63.1 billion in imports.

The French chemicals industry ranks sixth in the world, behind China, the U.S., Japan, Germany, and South Korea. The majority of the country’s chemicals exports (68%) are to European markets (the European Union, central Europe, and eastern Europe). The second-largest destination for French chemicals exports is Asia (9.3%), a fast-growing market in which France continues to strengthen its position, followed by the U.S. (5.4%).

France has three coastlines that are easily accessible. The country has developed large port complexes suitable for trade in chemical products: Le Havre and Dunkerque on the coast of the English Channel and North Sea, Nantes-Saint-Nazaire and Bordeaux on the Atlantic Ocean, and Marseille-Fos on the Mediterranean Sea.

French ports are accessible to all grades of ships and have permanent deepwater capacity. They are also linked to a network of major roads, highways, and the French and European rail systems, as well as the main navigable waterways.

The importance of innovation

The French chemicals sector has always been a leader in innovation and continues to invest heavily in research and development (R&D). Close to 12,000 people are engaged in R&D, including 5,500 PhD researchers, and many French companies devote more than 2% of their turnover to R&D. SMEs are very active in R&D and employ 32% of the researchers in the chemicals industry.

For several years, public authorities and other stakeholders in the sector (chemical companies, social partners, research and training organizations) have developed tax-incentive programs to support R&D in chemistry. In addition, Comité Stratégique de Filière Chimie et Matériaux (CSF), a strategic council for the chemicals industry, was established in 2011 to bring together industry, customers, and public authorities to develop economic, social, and technical conditions favorable to competitiveness and development of the chemicals industry in France. This far-reaching program will keep the French chemicals industry moving forward.

The chemicals industry in France invests heavily in forward-looking sectors such as sustainable chemistry. The Strategy Committee for Chemicals and Materials has developed a plan for the chemicals industry that focuses on three main guidelines, one of which is sustainability — developing an economy focused on renewable energy and resources, as well as recycling. (The other two are competitiveness and attractiveness.)

Green chemistry is changing the face of the French chemicals industry. New processes are designed in ways that reduce their impact on human health and the environment, involve the use of renewable raw materials and energy sources, and operate at optimal yields and efficiencies. As an example, the French Diester Industrie, a leading biodiesel producer, has production capacity of 1.35 million m.t./yr.

In France, the chemicals industry is also taking part in the global effort to reduce greenhouse gas (GHG) emissions. The industry has reduced total GHG emissions from 53.9 million ton of CO2e in 1990 to 26.9 million ton of CO2e in 2012. As this issue goes to press, world leaders are preparing to meet in Paris for the 21st session of the United Nations (UN) Conference of Parties to the UN Framework on Climate Change (COP21).

Through innovation and sustainable chemistry, the French chemicals industry has maintained a leading position in a competitive global environment.

Didier Le Vély is Director of Economic and International Affairs of the Union of Chemical Industries in France (Email: dlevely@uic.fr). Previously, he managed a polyvinyl chloride (PVC) transformation company. He has held various management positions in the French and U.S. chemicals industry. He holds a chemical engineering degree from École Nationale Supérieure de Chimie de Rennes and an MBA from Audencia Business School in Nantes.

The author thanks Jean-Pierre Dal Pont, president of Société Française de Génie des Procédés (SFGP), for his help with this article.

All of us at Chemical Engineering Progress and the American Institute of Chemical Engineers express our great sorrow and sympathy for all individuals and families in France affected by the terrorist attacks of November 13, 2015.

Editorial: A Vote for Science and Engineering

Patent Update: Patent Validity Could Come Down to Clarity

Railroad crossings that are not protected by gates or warning lights typically include signs to alert you of the potential for danger. Versions of the sign all have one thing in common — the reminder to stop, look, and listen. Only after stopping before crossing the tracks, looking in both...

Emily Leproust, CEO and co-founder of Twist Bioscience, is reinventing the wheel when it comes to DNA synthesis. “I have one goal with respect to DNA synthesis — that’s to make cloning obsolete,” she says. ...