Silk is a lustrous, protein-based fiber that gives textiles their luxurious appearance and medical sutures their strength. Nearly all commercially available silk is produced on silkworm farms through a process that has been around for thousands of years. Silkworm cocoons, typically from the moth Bombyx mori, are collected and degummed; the silk filaments are then reeled and twisted into yarn. While silkworm silk remains prized for its soft texture and durability, variability in farming conditions and the presence of residual components from the silkworm cocoon impact the quality and wash-resistance of silk textiles.

Other species can also make silk, but none of these have been produced commercially to date. For example, spiders produce silk with strength and elasticity that far exceed those of silkworm silk. Unfortunately, spiders are territorial and cannibalistic, and each animal produces a very small amount of silk — which is not suitable for commercial production. 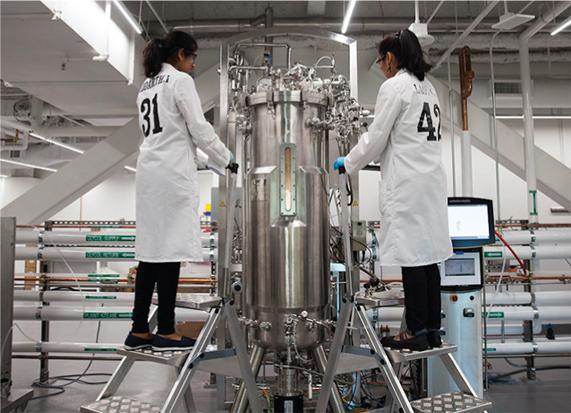 ▲ Bolt Threads has developed a commercial-scale process to produce synthetic spider silk — the first of its kind.

Scientists have attempted to develop methods to produce silks without silkworms or spiders for decades. Many industrial and academic groups have focused on producing spider silk through a variety of heterologous hosts, including plants, bacteria, yeast, and even goats. Those efforts have achieved varying success, but none has reached the economic efficiency and scale necessary to bring a product to market.

With research funding from the National Science Foundation (NSF), Bolt Threads, a California-based company, has overcome that challenge and is producing engineered silk, without spiders, at commercial scale. The company’s process involves genetically modified yeast that metabolize sugar into silk proteins, which are separated from spent yeast cells and extruded into engineered silk fibers with consistent quality and mechanical properties.

The key to the process is in the genetically modified microorganism. The founders of Bolt Threads have come up with a way to construct a genetic circuit of genes inspired by the spider and insert it into yeast, where it programs the organism to spit out silk proteins.

From the early development stage, Bolt has shaped its process so that it would scale beyond the laboratory through to commercial manufacturing. Its choice of yeast as the host organism was critical for robust, economical scale-up of silk production in conventional, industrial-scale fermentation facilities. It genetically engineered the yeast to not only convert sugar into silk, but to secrete it as well, eliminating the need to break open cells to harvest the protein. This impacts production economics in two important ways: First, it enables a much more productive fermentation, because the cell volume itself does not limit the amount of protein that can be produced. Second, it greatly simplifies recovery and purification of the silk protein to the quality level needed for fiber spinning.

To complement the upstream production, Bolt’s engineers and scientists have customized a wet spinning process to convert the fermentation-based silk protein into engineered silk fibers. Those silk fibers are then spun into yarns, which are used to make textiles.

The company has drawn on the wealth of knowledge available from the industrial biotechnology, fiber-processing, and textiles industries. By hiring and learning from veteran engineers and partnering with the Michigan Biotechnology Institute (MBI) to operate large (thousands of liters) fermentation vessels, Bolt Threads has leveraged the knowledge of experienced operations staff and industry best practices to commercialize its technology.

“As a chemical engineer, I am excited to be developing and scaling a process, which incorporates such a diverse group of unit operations from fermentation through fiber spinning,” says Jason Ryder, vice president of manufacturing at Bolt Threads. “On any given day, we are solving complex problems spanning metabolic engineering to extensional rheology.”

Through its continued demonstration-scale production at MBI, Bolt has validated the robustness and transferability of its process for future commercial-scale facilities and continues to improve the production economics. Ryder believes such engineered silk fibers have the potential to be more sustainable than any textile material currently in use, because they are naturally biodegradable and they do not rely on petroleum feedstocks, heavy pesticide use, or livestock.

Bolt Threads is producing commercial quantities of engineered silk and is currently in yarn development. The company plans to have a textile product on the market by the end of 2016.