Regenerative biology is valuable for tissue renewal and replacement, but is also critical for creating models that replicate human organ physiology and functions. These models would make it easier to study the molecular and cellular features of human diseases and to develop new drugs for debilitating conditions.

Organoids are three-dimensional (3D) miniature versions of a target organ. They are a promising tool to model organ function, and are poised to revolutionize medicine. Organoids can contribute to the understanding and treatment of debilitating diseases that arise in particular organ systems, but their use is fraught with challenges.

This article describes organoid biology and engineering and reviews recent progress in organoid development, with a specific focus on liver, biliary tract, and pancreas models.

The challenge of modeling organs

For years, basic research has relied on cell lines derived from human tumors, or transformed with viral genes, to model organ-specific functions. These cell lines have been a mainstay of many labs across the world, and pharmaceutical companies often employ these cell lines in studies of toxicity and efficacy and to model human disease (1).

However, real organs in the body consist of primary cells, not cell lines that express a combination of normal and cancer-related genes. To develop improved physiological models, tissue engineers and scientists devised techniques to isolate multiple cell types from tissues and organs and to cultivate these cells in 2D or 3D formats. These techniques built on fundamentals of cell-cell and cell-matrix interactions and often employ both biomaterial and natural substrates (2). Researchers evaluated the implantation of tissue-engineered constructs to replace damaged organs in the clinic, with positive outcomes in some cases (3, 4). These foundational studies in tissue engineering were often limited by the cell source — primary human tissues harvested from biopsied or discarded tissues. 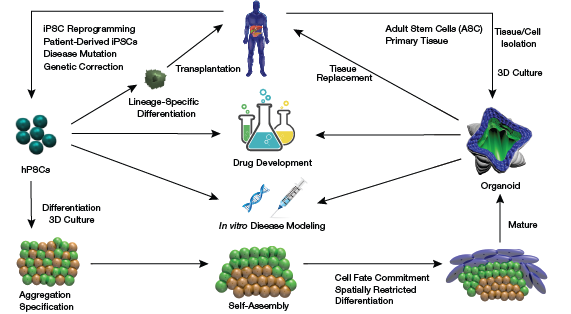 ▲Figure 1. Organoids can be developed from isolated adult stem cells or primary tissue or by differentiating and culturing human pluri­potent stem cells (hPSCs). Alternatively, personalized hPSCs can be employed for therapy after lineage-specific differentiation.

▲Figure 2. (a) An organ’s microstructure often confers its function. (b) Organs are made of many cellular constituents, which include parenchymal cells (P1, P2), supporting cells (S), and adult stem cells/progenitors (ASC-p). Human pluri­potent stem cell progenitors (PSC-p) can be used in place of ASCs in the creation of organoids. (c) The repeating structural/functional units of organs can be recreated in organoids.

Employing principles of morphogenesis and self-assembly modeled by Oster et al. and their colleagues in the 1960s (7), organoids have the potential to recapitulate (i.e., replicate) key structural and functional features of their human organ counterparts (8, 9).

The complexity of hepatic, biliary, and pancreatic organs

For example, the liver bears microscopic hepatic cords of single-cell thickness. These hepatic cords are comprised of hepatocytes, the functional cells of the liver, and stellate cells, the supporting cells of the liver. The hepatic cords are bordered on two sides by microscopic vascular channels lined with specialized endothelial cells, called liver sinusoidal endothelial cells (LSEC) (2). Physiological liver functions include albumin and urea secretion, and P450 enzyme activity (involved in metabolism of drugs) (2).

The biliary tract (i.e., biliary tree) is responsible for making, storing, and secreting bile. It carries bile from the liver to the gall bladder and eventually the gastrointestinal tract, and is lined by specialized cells called cholangiocytes. The biliary tree is integrated with both the hepatic cords and hepatic vasculature.

Not surprisingly, organ microstructure is degraded or lost in diseases like liver fibrosis, primary sclerosing cholangitis (which affects the biliary tract), and Type I diabetes and pancreatitis (which affect the pancreas) (10).

The term organoid has been used loosely in the field. Here, we define organoids as miniature cell-bearing structures, on the order of 100–5,000 cells, which either contain multiple cell types that correspond to the tissue composition of the target organ or have a 3D structure similar to that of the target organ.

▲Figure 3.In vitro models of organoids have utilized many different culture techniques to mimic the in vivo environment. Several self-organizing culture approaches have been explored. In these techniques, cells are seeded onto specially treated surfaces and allowed to aggregate over time. Using 3D culture gel-based methods, cell aggregates are then embedded or cultured on top of an extracellular matrix.

Organoids contain primary tissues, hPSCs, or adult stem cells, or some combination of these. Complex epithelial cell types, like the cells discussed in this article, are anchorage-dependent. Interestingly, cultivation formats for organoids typically rely on self-assembly of cells, because they are, in fact, cultured in nonadherent conditions (Figure 3).

For decades, livestock producers have routinely administered antibiotics to animals to make them grow faster or as a preventive treatment against disease. This may be contributing to the increasing number of humans being infected by antibiotic-resistant bacteria. Researchers are now searching for...

Engineering the Precise Translation of Novel Medicines; From Data to Diagnosis: The Search for Biochemical Markers of Autism Spectrum Disorder; Designing Drug Delivery Systems for Articular Joints; Curtailing Antiobiotic Use in Livestock Production; Recent Advances in Hydrogels for Tissue...

For millennia, civilizations have extracted indigo dye from plants, creating a product that by the 18th century had become a driver of global economics. But, as the 20th century began, global output of natural indigo fell by over 90% as synthetic indigo took its place.

Editorial: Print Is Not Dead

This ia an expanded version of the editorial that appears in the May issue of CEP ...

Spotlight on Safety: Risk, Not Chance