▲Figure 1. (a) Pitched-blade turbine impellers typically have four blades and are used to mix low- and medium-viscosity fluids. (b) Hydrofoil blades have an aerodynamic shape that requires less torque than pitched blades.

Pitched-blade turbines typically have four blades at an angle of 45 deg. and have been used since at least the 1940s for general-purpose mixing of low- and medium-viscosity fluids, as well as for simple blending and solids suspension. They can create a vortex at the liquid surface to incorporate dry solids or gases. Their simple shape makes them economical to manufacture. 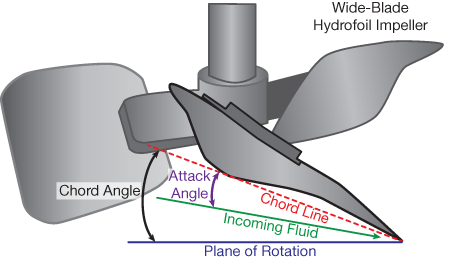 ▲Figure 2. On a hydrofoil impeller, the camber, angle of attack, and chord angle can be designed and optimized for the fluid and mixing conditions.

Hydrofoil impellers have been used since the 1970s in many mixing applications. They usually have three blades, a low angle of attack (15–25 deg. at the blade tip, to avoid boundary layer separation), and a camber in the blade that causes the chord angle to increase from tip to hub (Figure 2). They have been used to blend low-viscosity liquids in shear-sensitive applications and to suspend solids. The aerodynamic shape makes the blades more effective at producing flow for a given power and speed than pitched-blades and requires less torque for the same mixing conditions.

Similarly, the pumping number is constant in turbulent flow. It drops as the flow goes through the transition regime, and then becomes constant in laminar flow.

An effective way to study the mixing performance of different impellers is to calculate the power drawn by each impeller under the same conditions. The power number (NP) and the laminar power number constant (KL) act as a foundation to calculate the power. The literature gives values for KL of 27.4 for a typical hydrofoil and 43.2 for a pitched-blade turbine (1). The pumping number (NQ) is used to calculate impeller pumping; the published value of NQ is 0.214 for hydrofoils and 0.2954 for pitched-blade turbines operating in laminar flow (2). With these data, the relative pumping for both impellers operating at the same power input can now be calculated.

For the pitched-blade turbine impeller:

For decades, livestock producers have routinely administered antibiotics to animals to make them grow faster or as a preventive treatment against disease. This may be contributing to the increasing number of humans being infected by antibiotic-resistant bacteria. Researchers are now searching for...

Engineering the Precise Translation of Novel Medicines; From Data to Diagnosis: The Search for Biochemical Markers of Autism Spectrum Disorder; Designing Drug Delivery Systems for Articular Joints; Curtailing Antiobiotic Use in Livestock Production; Recent Advances in Hydrogels for Tissue...

For millennia, civilizations have extracted indigo dye from plants, creating a product that by the 18th century had become a driver of global economics. But, as the 20th century began, global output of natural indigo fell by over 90% as synthetic indigo took its place.

Editorial: Print Is Not Dead

This ia an expanded version of the editorial that appears in the May issue of CEP ...

Spotlight on Safety: Risk, Not Chance