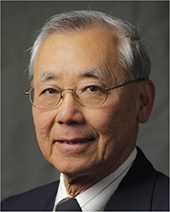 Friends and colleagues of the late John C. Chen — the Carl R. Anderson Professor Emeritus of Chemical Engineering at Lehigh Univ., and an AIChE Fellow and past president — are building an AIChE endowment fund to support the leadership development of young chemical engineers. The associated fundraising campaign for the John C. Chen Endowment for Young Professional Leadership was announced in April at the 2018 AIChE Spring Meeting and Global Congress on Process Safety. The endowment was seeded with a donation by Kathy Chen, John’s wife of 57 years, who approached the AIChE Foundation with an idea to honor, in perpetuity, John’s personal commitment to both AIChE and to inspiring future generations of chemical engineers.

In a letter announcing the campaign, L.S. Fan, Chair of the John Chen Endowment Steering Committee, described Chen as “the consummate role model for young professionals, who believed wholeheartedly that their leadership development was a priority for the advancement of the profession and the betterment of society.”

The endowment will provide annual financial support to cover the expenses of two leadership-track young professionals at the AIChE Annual Meeting, where they will participate in PEAK leadership training sessions. Additional funds will be made available for tailored online training opportunities throughout the year.

As this issue of CEP goes to press, the campaign has raised nearly two-thirds of its $100K goal for 2018.

Chen, who died in 2013, was a scholar of transport phenomena in multiphase systems and a pioneer in heat transfer theory and practice. After earning his PhD in chemical engineering at the Univ. of Michigan, he performed research at Brookhaven National Laboratory. In 1970, he joined the faculty at Lehigh Univ., where his broad expertise enabled him to be a professor of both mechanical and chemical engineering. He chaired the Lehigh chemical engineering dept. (1983–1989) and served as dean of Lehigh’s P. C. Rossin College of Engineering and Applied Science (1999–2001). Chen’s leadership roles in AIChE were also wide-ranging. He chaired the Heat Transfer and Energy Conversion Div. in 1983, and in the early 1990s he was a founding member and leader of the Particle Technology Forum (PTF). He was elected as an AIChE director (1995–1997), Institute Secretary (2001–2003), and served as AIChE President in 2006. Projects launched during his presidency included AIChE’s Energy Initiative and the International Committee. His honors included AIChE’s D. Q. Kern Award, the Heat Transfer and Energy Conversion Div. Award, and the PTF’s Thomas Baron Award in Fluid-Particle Systems. Some of his international honors included the Max Planck Research Prize, and, in 2012, the inaugural World Scientific Award in Boiling and Condensing Heat Transfer.

For more information about the John C. Chen Endowment for Young Professional Leadership — or to learn about other initiatives of the AIChE Foundation — visit www.aiche.org/giving.

AIChE has signed a Memorandum of Understanding (MoU) with its Saudi Arabia Local Section to collaborate on shared objectives that advance the application of chemical engineering knowledge and support societal needs in the Middle East. The MoU was signed by June Wispelwey, Executive Director of AIChE, and Mohsen Almajnouni, Chair of the Saudi Arabia Local Section and chief executive officer of Research Products Development Co. (Riyadh, Saudi Arabia). The signing took place in New York City on March 27, 2018, at a ceremony that was part of the second annual Saudi-U.S. CEO Forum.

Chartered by AIChE in 1988, the Saudi Arabia Section was one of the Institute’s first sections to be formed outside the United States. The Section was instrumental in establishing the biennial Middle East Process Technology Conference and Exhibition, which has emerged as the region’s largest oil and gas processing conference. 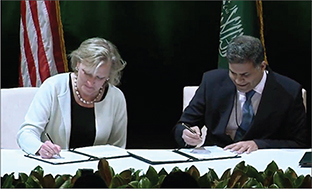 Gayle J. Gibson retired in 2017 as head of engineering at DuPont, where she improved capital project practices and portfolio choices, deployed engineering expertise to innovation and manufacturing projects, and hired and mentored young engineers. In more than 30 years at DuPont, she worked across business units with career contributions including engineering design, process engineering, research and development, product and process development,...

For decades, livestock producers have routinely administered antibiotics to animals to make them grow faster or as a preventive treatment against disease. This may be contributing to the increasing number of humans being infected by antibiotic-resistant bacteria. Researchers are now searching for viable alternatives.