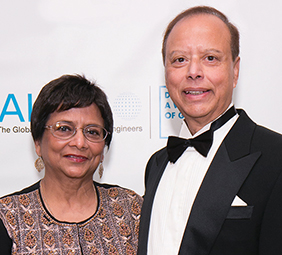 Syamal K. Poddar, an AIChE Fellow and President of the Houston, TX-based Poddar and Associates, has been named Philanthropist of the Year for 2017 by the AIChE Foundation, in recognition of a recent fundraising challenge initiated by Poddar and his wife, Susmita. The endeavor was the latest donation made by the Poddars to the AIChE Foundation’s Annual Fund — a cornerstone of the Foundation’s activities dedicated to supporting programs that align with AIChE’s mission.

Last year, the Poddars announced a matching gift challenge — offering to match dollar for dollar up to $20,000 all donations made to the Institute’s Annual Fund during the year. By year-end, more than 300 donors had responded to the challenge, which ultimately raised $61,000 for the Annual Fund. Those donations finance programs such as: scholarships; support for students, young professionals, and chemical engineers from underrepresented groups; education and training initiatives; and activities aimed at inspiring K–12 students to pursue engineering as a career path.

In a recent interview, Poddar said that he and his wife are dedicated to AIChE “because of its mission to make the world a better and safer place through chemical engineering — which is something we both believe in.” He reflected that “as time goes by, Susmita and I have become even more passionate about the causes we support,” adding that “AIChE plays a vital role in our lives, and we want to invest in and strengthen its ability to support the next generation of chemical engineers.”

Poddar’s career encompasses more than 40 years of experience working with technologies and processes related to the hydrocarbon and energy industries. Prior to establishing his consultancy, Poddar worked in a variety of capacities for Exxon Research and Engineering Co. and Bechtel. His extensive AIChE activities include leadership roles in the South Texas Section, the Fuels and Petrochemicals Div., and the Management Div., as well as participation in the Societal Impact Operating Council and the Fellows Council. He earned his PhD in chemical engineering from the Univ. of Pennsylvania.

Information about the AIChE Foundation and its many programs can be found at www.aiche.org/giving.

AIChE Members are Elected to the National Academy of Engineering

The National Academy of Engineering (NAE) has elected 83 new members and 26 foreign members to its 2018 class. The new members will be formally inducted during a ceremony to be held at the NAE’s Annual Meeting in Washington, DC, on Sept. 20, 2018. This year, the following AIChE members join the NAE’s distinguished ranks:

Process Intensification: Its Time is Now

For more than 40 years, process intensification (PI) efforts in the U.S. have lagged behind those in other parts of the world. Europe has invested heavily in this research area, and both industry and academia have embraced advances in these technologies — particularly in the chemical and...

Realize the Potential of Process Intensification

With a history that dates back to the 1970s, process intensification (PI) is not a new concept. Several developments have moved PI forward, but realizing PI’s full potential will require the concerted efforts of industry, academia, and government.

Most high-margin growth opportunities lie in high-grade specialty chemicals. To realize these opportunities, manufacturers are looking to distributed modular production facilities. Process intensification could help to enable these new technologies.

Static mixers can efficiently and effectively accomplish an increasing number of process objectives, expanding the opportunities to apply them for process intensification.

Energy sustainability represents one of the grand challenges facing modern society, and thin-film solar photovoltaics provide one of the best opportunities for rapidly expanding renewable energy use. Photovoltaics (PV) using the thin-film semi­conductor cadmium telluride (CdTe) have been...

Editorial: Is the Safest Option Really the Best?

Major incidents at chemical facilities have brought about changes in the way chemical engineers practice their craft, and have been the impetus for creating various regulations.

Globalization has become unavoidable for businesses, organizations, and even individuals who must now extend their reach internationally to be successful. Political entities around the world are split on the idea — either decrying or heralding its implications on trade, supply chains, and...