Separations account for a significant proportion of worldwide energy consumption (1). Energy-intensive distillation dominates the chemical process industries (CPI), but more-efficient alternatives, such as membrane technology and adsorption by porous materials, are also in widespread use. Pressure-swing adsorption (PSA) and temperature-swing adsorption (TSA) are two common gas separation processes. In a PSA process, adsorbents are regenerated by reducing pressure; in a TSA process, they are regenerated by applying heat (2–4).

Adsorbent performance as a function of temperature, pressure, and gas composition is a crucial aspect of PSA and TSA. To determine whether an adsorbent will be appropriate for a specific application, you must assess its working capacity, isotherm shape, selectivity, heat of adsorption, and sorption kinetics. Such data can be obtained using laboratory gas adsorption measurement techniques, prior to testing and optimizing process designs in a pilot plant.

This article discusses how to characterize adsorbents in the lab. It covers the performance parameters and data required for gas separations and the laboratory techniques used to obtain this information. The article also discusses methods for assessing multicomponent adsorption and identifies future challenges in the field. 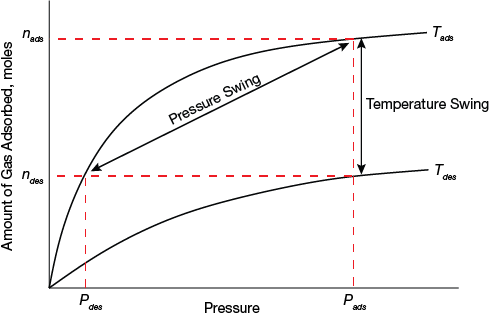 ▲Figure 1. An adsorbent’s working capacity depends on the shape of its isotherm. This illustration shows the pressure-swing and temperature-swing cycles in PSA and TSA (2, 3), where n is the equilibrium amount adsorbed and P is pressure, and the working capacity in each case is given by nads–ndes. Lowering Pdes in PSA increases nads–ndes, as does increasing Tdes in TSA.

The performance of an adsorbent for a particular separation depends on several factors. One of the most important is its working capacity. For PSA, it is the difference between the uptake at the feed pressure and the uptake at the regeneration pressure. For TSA, it is the difference between the uptakes at the feed temperature and the regeneration temperature at the working pressure (Figure 1).

For any given adsorbent, working capacity depends partly on isotherm shape. For PSA, for example, the steeper the isotherm in the operating pressure range at the process temperature, the greater the working capacity (for an adsorbent with a given saturation uptake). Isotherms measured at different temperatures, however, are also required to accurately and realistically simulate a process (4).

At the temperatures and pressures typically used for gas separation, isotherms for most nanoporous adsorbents follow the trend shown by the Langmuir equation. These are known as favorable isotherms and are concave to the pressure axis (5), as shown in Figure 1. Loading as a function of pressure, however, often increases more gradually than described by the Langmuir equation (the Langmuir model assumes adsorption occurs on a homogeneous surface, which is physically unrealistic for most adsorbents). When this is the case, other models, such as the Tóth and Sips (or Langmuir- Freundlich) equations, which describe heterogeneous adsorption, are more appropriate (4).

Working capacity and isotherm shape are basic properties that define a material’s ability to adsorb gases. For separation, however, selectivity is more important. Selectivity can be defined in different ways depending on the separation mechanism, of which there are two general types — equilibrium and kinetic. Most commercial separation processes are equilibrium-based, although the recovery of nitrogen from air using carbon molecular sieves, for example, is a kinetics-based separation (4, 7).

where n1 and n2 are the molar loadings of Species 1 and 2 at partial pressures of p1 and p2, respectively, under the process conditions.

Kinetic selectivity, Skin, meanwhile, can be expressed as:

where K1 and K2 are the Henry’s law constants and D1 and D2 are the diffusivities of Species 1 and 2, respectively (7).

Equilibrium selectivity therefore depends on the relative equilibrium quantities of each component adsorbed under the process conditions, whereas kinetic selectivity depends on differences in diffusion rates. Both types of selectivity can be calculated from data obtained using the lab techniques described later in this article.

The heat of adsorption defines the temperature and pressure at which adsorption occurs, but a higher value also means that more heat will be generated during the adsorption process. Particularly large temperature increases in adsorbent beds are possible, which can lower the transient or dynamic bed capacity, because the amount of adsorbate adsorbed decreases with increasing temperature. And, higher heats of adsorption can adversely affect process efficiency, particularly for TSA, because more energy will be required for adsorbent regeneration.

Heats of adsorption can be defined in different ways (8), but the most practically useful is the isosteric heat, qi (4). To calculate isosteric heat, measure isotherms at two or more temperatures (that are close in value) and use the following (Clausius-Clapeyron-type) relationship:

where R is the universal gas constant, T is temperature, P is pressure, and ni is the uptake.

To calculate qi, plot the natural logs of the pressures for isotherm points at constant uptake against 1/T. A straight-line fit through these data has a slope of qi/R. Using this process, qi can be calculated for different values of ni. For pure gases, qi typically decreases with loading, as the most strongly interacting sites or pores are occupied first. Increases at higher loading can occur due to adsorbate-adsorbate interactions, which become more significant at higher pressures and gas densities. (At lower loadings, adsorbate-adsorbent interactions dominate because the gas molecules are mostly interacting with the surface, rather than each other.) However, it is worth noting that calculated values of qi can be quite sensitive to the method used, so some observed changes may simply be a result of the fitting process (9).

Although simple in principle, detailed analysis of sorption kinetics and diffusion is a complex topic (2, 9, 10). However, for engineering purposes, the kinetics can be approximated because the need for mathematical simplicity is often more important than having an accurate description of the microscopic processes occurring in a full column. For simulations, kinetics are most commonly described using the linear driving force (LDF) model (2, 4, 11). This simple approach is often sufficient for process simulation, because the differences in the kinetic curves for different models that describe diffusion at a microscopic level can be lost during the integration processes required to describe the performance of a full column (11).

The importance of adsorbent and adsorbate properties

The equilibria and kinetics of gas adsorption depend on the properties of the adsorbate and the adsorbent (2). Maximum equilibrium capacities, for example, generally increase with the total pore volume of a material. However, the amount of uptake as a function of pressure (at any given temperature) depends on several other properties, including pore size, the strength of adsorbate-adsorbent interactions, and adsorbent heterogeneity.

An adsorbent’s pore size affects the equilibrium uptake, as narrow pores result in greater overlap of the adsorption potentials of opposing pore walls. This increases the adsorption strength, leading to more adsorption at lower pressures. However, interactions between an adsorbate and a particular surface also depend on the properties of the adsorbate, such as its polarizability and dipole and quadrupole moments, and the chemistry of the adsorbent (2). For example, CO2 typically adsorbs more strongly than other gases such as H2, N2, and CH4, because it has a larger quadrupole moment, whereas He interacts more weakly than H2, N2, and CH4, because it has no dipole or quadrupole moment and it has a relatively low polarizability. Polar surfaces also interact more strongly with...

Process Intensification: Its Time is Now

For more than 40 years, process intensification (PI) efforts in the U.S. have lagged behind those in other parts of the world. Europe has invested heavily in this research area, and both industry and academia have embraced advances in these technologies — particularly in the chemical and...

Realize the Potential of Process Intensification

With a history that dates back to the 1970s, process intensification (PI) is not a new concept. Several developments have moved PI forward, but realizing PI’s full potential will require the concerted efforts of industry, academia, and government.

Most high-margin growth opportunities lie in high-grade specialty chemicals. To realize these opportunities, manufacturers are looking to distributed modular production facilities. Process intensification could help to enable these new technologies.

Static mixers can efficiently and effectively accomplish an increasing number of process objectives, expanding the opportunities to apply them for process intensification.

Energy sustainability represents one of the grand challenges facing modern society, and thin-film solar photovoltaics provide one of the best opportunities for rapidly expanding renewable energy use. Photovoltaics (PV) using the thin-film semi­conductor cadmium telluride (CdTe) have been...

Editorial: Is the Safest Option Really the Best?

Major incidents at chemical facilities have brought about changes in the way chemical engineers practice their craft, and have been the impetus for creating various regulations.

Globalization has become unavoidable for businesses, organizations, and even individuals who must now extend their reach internationally to be successful. Political entities around the world are split on the idea — either decrying or heralding its implications on trade, supply chains, and...