Engineers are often asked to design or recommend equipment for storing and handling bulk solid feedstocks, intermediates, and products. Unfortunately, chemical engineers’ education and training on bulk solids are often insufficient for such tasks. To make the situation more difficult, critical solids flow properties are often unavailable and must be determined experimentally.

▲Figure 1. Common geometries for hoppers, bins, and silos include (a) conical, (b) wedge, (c) transition, and (d) pyramidal.

This article presents methods for measuring fundamental bulk solids flow properties and explains how to use them to design hoppers, bins, and silos for reliable flow. It expands on previous CEP articles devoted to solids storage and handling and bin design by providing a step-by-step guide to the graphical analyses and calculations necessary for bin design (1, 2). An example calculation section illustrates how to specify storage vessel shapes, outlet sizes, and hopper angles.

The first step in the design process is to determine the fundamental properties needed to predict the flow behavior of bulk solids: cohesive strength, internal friction, compressibility, wall friction, and permeability. Test results are used to calculate the size of the hopper section outlet and the recommended hopper angle. The properties are determined by calculations, measurements, and graphical analysis.

First draw a line through the shear step data. Next, draw a semicircle tangential to the yield locus line at the average of the steady-state results. The larger-valued intersection of the semicircle with the horizontal axis is the major principal stress (σ1). Then draw a second semicircle tangent to the yield locus through the origin. The other point of intersection of this circle and the horizontal axis is the unconfined yield strength (fC). Most modern automated shear cell testers assume that the yield locus is linear, which allows analytical expressions to be used to calculate σ1 and fC.

The volume is recorded during a shear cell test so that the material’s bulk density (ρb) is also measured. 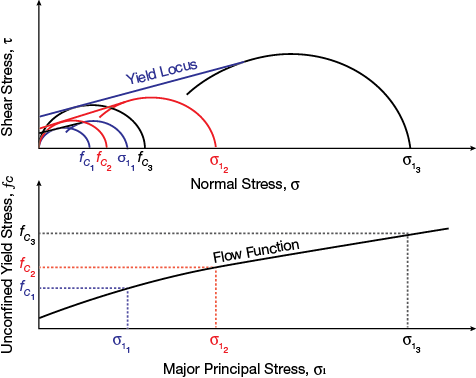 ▲Figure 3. The flow function is the relationship between the major stress and the unconfined yield strength. A graphical representation is constructed by connecting the points of different yield locus measurements.

▲Figure 4. The curve drawn tangent to the larger Mohr’s circles is the effective yield locus.

The plot of the unconfined yield strength (fC) against the major principal stress (σ1) is the flow function of a bulk solid, and describes the relationship between a bulk material’s cohesive strength and its consolidation stress. Figure 3 shows the construction of a flow function from three yield locus measurements. An envelope of the Mohr’s semicircles forms the effective yield locus (Figure 4).

Some bulk materials gain cohesive strength and adhere to wall surfaces when they are stored at rest, so if a bin is not expected to operate continuously, time tests are conducted to measure the cohesive strength and static friction between the wall surface and the bulk solid after storage at rest (3). The time test subjects the sample of powder to a normal load for a period of time (e.g., two to three days to simulate a weekend downtime) at the start of test.

To determine the permeability of a bulk solid, run a gas through a bed of powder contained in a cylinder. Measure the pressure and flowrate in two locations of the bed. The permeability (K) is calculated from Darcy’s Law:

where u is the superficial gas velocity, P is the gas pressure, ΔP is the difference between two pressure measurements separated by a distance of h in the bed, g is the acceleration due to gravity, and ρb is the bulk density.

The design of a new bin takes into account the cohesiveness of the bulk solid, headroom or footprint constraints, segregation concerns, the likelihood of degradation over time (e.g., caking or spoilage), and discharge rate requirements. 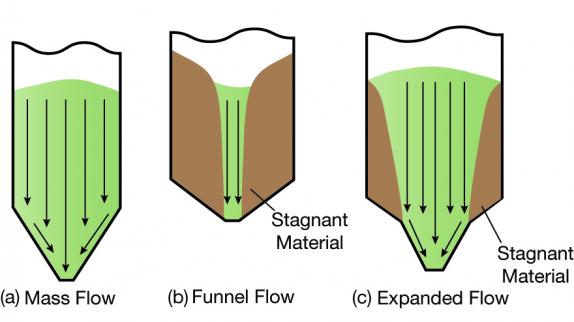 ▲Figure 6. Mass flow (a) ensures a more-uniform discharge of bulk solids than funnel flow (b) or expanded flow (c).

Three flow patterns can occur in a bin: mass flow, funnel flow, and expanded flow. In mass flow (Figure 6a), the entire bed of solids is in motion when material is discharged from the outlet. This behavior prevents the formation of stagnant material and ratholes, affords a first-in/first-out flow sequence, and ensures a more uniform velocity profile during operation. 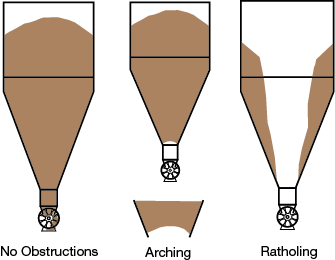 ▲Figure 7. Obstructions such as cohesive arches and ratholes prevent flow through a hopper.

Designing a mass flow bin with the desired capacity for a facility that has headroom restrictions may be a challenge. In general, for a given...