Most pilot plants operate for a relatively short time compared to a production facility and are frequently modified to suit a changing research focus or a new scale-up project. When you invest extra effort to develop a better layout, you can significantly reduce the costs of constructing, operating, and modifying a pilot facility and improve the safety of its operations.

Many pilot plants have been deemed problems or only marginally effective for reasons that ultimately trace back to too little space and too little attention paid early in the design process to space requirements. Sometimes these problems stemmed from a terrible initial estimate, and at other times there was a failure to recognize the effect of changes, modifications, or additions arising in the detailed design. These issues are preventable with some experience, care, and effort.

This article discusses how to better estimate the space requirements for a pilot plant to ensure adequate space is allocated and offers best practices and examples to enable pilot plant designers to develop a more effective plant layout in this space.

Promote safe operation in all phases. A well-laid-out pilot plant encourages the operators to work in a rational and straightforward way and follow established, reviewed, and safe procedures. It also minimizes problems with filling and emptying, cleaning, loading and unloading, and maintaining equipment. A good layout can also minimize ergonomic issues and facilitate lock-out/tag-out.

Maximize operability. All equipment should be relatively easy to access for operation and maintenance. A pilot plant is an experimental test bed — modifications are a given. Space should be provided and the layout should facilitate them. 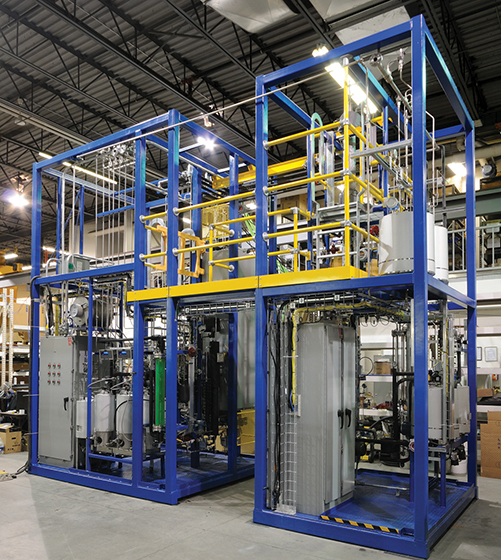 Minimize construction costs. When a plant is well laid out, less time is wasted during construction trying to decide where to put everything, less effort is wasted on rework when the ill-conceived layout proves unworkable, and less time is wasted during both startup and operations when layout problems become a hindrance. A well-laid-out unit can be built faster and modified more easily. Conversely, a crowded unit is always more expensive to construct and modify and consumes more resources and time to operate.

Minimize maintenance costs. Most of us have a horror story of the component in our car or home that required exceptional efforts to access for maintenance or replacement. The situation is much worse in a pilot plant. What will break or need work is always less clear than in a more well-defined operating facility. Crowded and poorly laid out units require significantly more time and effort to repair.

Minimize the space required. A good pilot plant layout takes advantage of the existing space but uses no more of it than necessary. Space can be at a premium at many research facilities, and adding more due to excessive and unnecessary layouts can be an expensive and time-consuming effort.

Realistically, it is impossible to meet all these goals equally. Any pilot plant layout needs to balance them. For instance:

These and many other questions will arise and need to be addressed during the layout. And each situation will have its own “best” answer.

The space “required” for a pilot plant is often estimated based on little real analysis. The facility is designed with inadequate space and is subject to higher construction costs, needlessly difficult operations, and long-term operability and safety issues. These problems typically cannot be corrected easily, regardless of the time, effort, and money expended. They are endemic to the unit, and correcting them would require rebuilding all, or most, of the pilot plant.

Option 1: Inspired guesswork. The designer guesstimates based on their experience. They do a cursory layout of the major equipment and provide what they guess is enough additional space for everything else. This is the riskiest approach, because it is inordinately dependent on the designer’s skill and experience.

When experienced researchers and operators are involved, the final layout is often only marginally better. Their competing experience can produce a potpourri of individual section layouts without a unifying approach. This can create problems when the individual sections are combined — some concerns will be overlooked by everyone, and other areas will be addressed by some but not all and in very different ways.

The effectiveness of this approach depends on how closely the final design matches the designer’s guess of the actual unit, because space is almost universally allocated well before the design is finalized. This tactic is also open to constant arguments that the space requirements are “grossly exaggerated” because of the large space contingency necessary. It becomes difficult to defend and justify with reasons other than “based on my experience,” a defense that rarely holds up well (even if later it turns out to be correct). The layout is then revised to reduce the space requirements, which will increase the risk of having too little space. This risk often goes unrecognized until it emerges too late in the process to effectively correct it. Mismatches in which the final design clearly needs more space are usually identified only when it is too late to correct the space allocation — causing serious problems. Thus, this approach frequently has higher costs and causes schedules to be missed — and produces a poor layout.

Option 2: Detailed design. The designer plans a very detailed layout in a 3D computer-aided design (CAD) system, after the final piping and instrumentation diagram (P&ID) has been developed. With easy access to 3D CAD programs, many organizations have come to believe they can develop a very detailed layout on a screen, optimize it, evaluate alternatives, and effectively produce an instructional drawing for the unit assembly. Theoretically this may seem the safest approach, but in practice, issues can be overlooked, which can render it less effective or even impractical.

Developing a detailed layout that shows all of the components, piping, valves, wiring, and supports is tedious and time-consuming, and hence very expensive. You need to have a fixed final design to begin, which is normally not the case in pilot plant work. You need to expend significant resources (i.e., a CAD designer plus a pilot plant designer, or a CAD-trained pilot plant designer) on the layouts. The CAD designer can spend up to several weeks creating the preliminary layout, depending on the size of the unit. The effort required is almost always underestimated and project delays are inevitable.

A beautiful 3D layout is almost useless if it does not show all of the dimensions between components. This can add days of work for the CAD designer, who must rely on an experienced pilot plant designer to identify all the space needs (e.g., supports, piping and wiring runs, accessibility, etc.). Even experienced pilot plant designers can miss a key element that requires more space or a different layout. The smallest errors or omissions trigger a cascade of changes, often discovered in the field, that frequently make reworking parts of the layout necessary. At that point, options are usually limited, unless the layout has unused space, and the costs and time required to correct problems are significantly higher. Change is a given in pilot plant work, and with an inflexible layout, changes will require rework of the drawing, the unit, or both.

My experience suggests that this approach is viable for small, simple units that do not have many elements that could be overlooked. It is also useful for large demonstration units, which have larger budgets and longer schedules, as well as larger components that make a computer-aided approach necessary. I have found that in all cases, problems requiring extra space that were not identified on a screen arose during the construction phase. The contingency required with this approach is less than what is needed in the experience-plus-guesswork approach, but it is far from trivial. Therefore, this approach is rarely cost- or schedule-effective, even if you can find a pilot plant designer with enough experience.

Option 3: Less-detailed design. The designer develops a much-less-detailed layout than Option 2, but with more detail than Option 1, after the P&ID has progressed far enough to minimize the chances that major changes will be needed. The designer also allocates a non-trivial space contingency. This is usually the safest approach, and one I strongly recommend.

The key is to determine how much of a space contingency is required. The designer must consider the additional space necessary for the worst case, and decide how confident they are in the major space-related portions of the P&ID.

Common problems with this approach include:

If you think of contingency as the allowance for historically predicable, but currently undefined, needs, then it makes sense to add a contingency to the estimated pilot plant space, as well as the cost estimate and schedule.

How do you determine the appropriate space contingency? First, recognize that extra space should be included throughout the entire unit. Simply providing an extra X% of the total space at the end of the last skid is usually not adequate because that is not where the space will be needed. Conversely, assuming a 1/4-in. line will be X% larger is not useful, as that provides small empty spaces with little practical use. You need to include space near and around each of the unit’s assemblies — for instance, you might add 10 in. around the reactor or 12 in. next to the feed system. The extra space will eventually be filled with piping and wiring, so it must be large enough, and close enough, to be useful.