The Past, Present, and Prospects for Colombia’s Chemicals Industry | AIChE
Skip to main content

This article provides an overview of Colombia’s chemicals industry and associated industries, and discusses the history, economy, and future of these sectors. 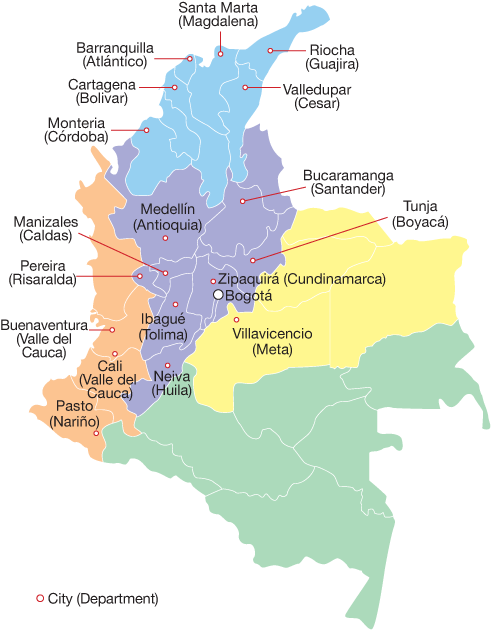 ▲Figure 1. Colombia’s Caribbean (blue), Orinoquía (yellow), Andean (purple), and Pacific (orange) regions are home to most of the country’s chemical process industries. The Amazon region (green) is known for its tropical rainforests.

Colombia is roughly equivalent in size to New Mexico, Texas, and Louisiana combined. A unitary republic with 32 departments and a capital district, the country can be divided into five distinct geographic areas: the Andean, Caribbean, Pacific, Orinoquía, and Amazon regions (Figure 1). The Caribbean, Andean, Orinoquía, and Pacific regions are home to most of Colombia’s chemical production facilities. The Andean region has the highest concentration of industrial plants, while most oil production occurs in the Orinoquía region, which borders Venezuela.

Coal mining, petroleum production and refining, and beer production are important industries in the Caribbean region. Open-pit coal mining is based in the region’s Cesar and Guajira departments, while the port city of Santa Marta exports coal. Petroleum is processed at the Reficar refinery in Cartagena, and petroleum derivatives are produced at the Monómeros Colombo Venezolanos chemicals facility in Barranquilla. SABMiller, a multinational brewing and beverage company, has a significant beer production plant in Barranquilla.

The Andean region is the most urbanized and industrially developed. In the Antioquia department, cement, chemical, and food and beverage production are concentrated in the city of Medellín. Grupo Nutresa, a leading producer of processed foods in Latin America, has a facility in the city, as does Grupo Orbis, the country’s paint and chemical products conglomerate. Postobón, Colombia’s largest beverage company, and Grupo Argos, the region’s largest cement producer, also have industrial works in Medellín.

Elsewhere in the Andean region, Ecopetrol processes oil at Barrancabermeja, the country’s largest oil refinery, which is supplied with 10,000 barrels per day (bpd) of crude from Infantas oil field, 4,000 bpd from the Provincia field, and 2,000 bpd from the Llanito field (1). Argos and Holcim, two dominant players in the Colombian cement industry, have production facilities in the Boyacá department, while in the capital city of Bogotá, Carboquímica’s plants supply raw materials for plastics and polyvinyl chloride production. Food and beverage and personal care manufacturers also have operations in the region. SAB Miller PLC has breweries in both Boyacá and Bogotá, and Belcorp Corp. and Quala S.A. produce cosmetics and personal care products in Bogotá.

As the country’s agricultural sector developed in the 1960s, demand for fertilizer grew, spurring growth in the chemicals sector. In 1967, the Colombia and Venezuela governments jointly created Monómeros Colombo Venezolanos, which built a caprolactam and compound fertilizer production plant in Barranquilla. This company is now controlled by Venezuela Petrochemicals (Pequiven). In 1956, Carboquímica had begun to produce aromatic solvents in Bogotá and, by 1962, expanded the facility to produce phthalic anhydride. The company continued to expand, opening a synthetic resins production facility in 1974. Today, Carboquímica is one of the leading Colombian companies in this chemical industry sector (2).

In the oil sector, Ecopetrol (Empresa Colombiana de Petróleos) was established in 1948 as a state-owned enterprise. In a historic event, Ecopetrol took over the International Petroleum Company’s Barrancabermeja refinery, operational since 1922 (3). In 2007, Ecopetrol became a mixed corporation, with 80% of stock owned by government and 20% held privately. In 2015, Ecopetrol’s new Reficar refinery began operations in Cartagena. It was initially conceived as an extension of an existing location. During facility construction, however, process specifications were modified so that the refinery could process heavier crude (18° API gravity). Reficar and Barrancabermeja today have the combined capacity to refine approximately 415,000 bpd.

Colombia produces about 1 million bpd of oil. According to the International Energy Agency (IEA), the country ranks as the 19th largest oil producer in the world and the fourth largest in Latin America after Brazil, Venezuela, and Mexico. Colombia is not a top crude oil refiner in the world or Latin America, ranking fifth in Latin America after Brazil, Mexico, Venezuela, and Argentina. The country had proven crude reserves of 2,300 million barrels as of 2014, enough to process and sell for about six years at current rates of exploitation.

As the Colombian consumer-product industry developed, alcoholic and nonalcoholic beverage production increased (2). Commercial beer production began in 1913 with the opening of the Águila Brewery in Barranquilla, followed in 1930 by the Bavaria Consortium in Bogotá. Bavaria acquired Águila in the 1970s and became Colombia’s largest beer producer. In 2005, Bavaria was acquired by SAB Miller PLC. Carbonated beverages are primarily produced in Medellín by Postobón, which was created when the Posada and Tobón families merged their companies. Postobón is now one of the country’s leading private companies, with a large product portfolio of soft drinks, fruit juices, bottled water, tea, and energy drinks.

Colombia does not have large basic-chemicals companies; however, it does have several consumer products companies with international presence. NOEL, a major producer of Colombian cookies, was founded in Medellín in 1916. Since 2005, it has been part of the Nutresa Group, a conglomerate of Colombian companies that produce cookies, ice cream, meat, chocolates, fast food, coffee, and pasta. The National Chocolate Co., a privately held producer of chocolate and chocolate products, was founded in 1920 in Medellín. The company became part of the Nutresa Group in 2009.

The Institute for Industrial Promotion (IFI) was instrumental in promoting the Colombian milk industry in several regions (2). INDUCOLSA, founded in 1952 in Valle del Cauca, is now known as Industria Colombiana de Alimentos. Privately held Alpina was founded in the 1940s in the Andean region and has become a dairy sector leader. The COOLECHERA cooperative was founded in 1964 in Antioquia and is now called COLANTA. One of Alpina’s biggest competitors, COLANTA has approximately 7,000 associates and 12,000 producers (4).

Total gross sales for the Colombian CPI, including consumer products and food and beverage industries, were $70.75 billion in 2014, which represents almost 19% of the country’s gross domestic product (GDP) of $378 billion, at current prices. Total gross sales, minus intermediate consumption, represent an added value of $26.6 billion. The National Manufacturing Survey (Encuesta Nacional Manufacturera), which evaluates the economic and productive performance of the country’s largest industrial enterprises, consolidates data for Colombia’s manufacturing industries (5). The survey only considers production activity. Mining, and activities where marketing adds value, are considered separately.

When industrial sales of processed food and plastic products are subtracted from total gross sales, the chemical sector represents $49 billion (13% of GDP), of which $22.8 billion correspond to petrochemical products. Bioethanol and biodiesel fuel production sales account for $650 million in sales. Refined petroleum products and consumer products, such as food, beverages, and personal care products, account for over half of the industry’s sales. Table 1 shows percentages of total gross sales for each of the main industrial chemical sectors.

The mining industry represented an added value of $31 billion in 2014. When compared to the industry’s $26.6 million, it shows the Colombian economy’s strong dependence on its mining sector. 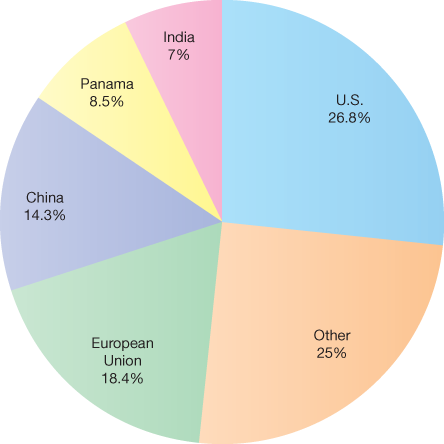 ▲Figure 2. Mining products, such as coal and gold, account for about 70% of Colombia’s exports, which are shipped to the U.S., the European Union, and China, among other countries. 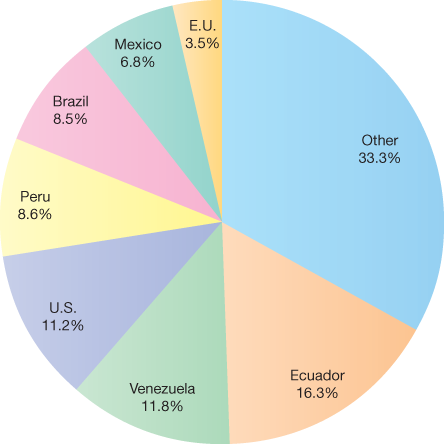 Corporate Sales. The 2014 gross sales for Colombia’s leading companies are listed in Table 3(7). Ecopetrol, for which the Colombian state is the largest shareholder, reported total sales of about $29 billion, followed by Bavaria with $2.3 billion in beer sales, and Drummond with $1.6 billion in coal revenues.

Colombia does not have a highly developed chemicals industry. Between 2008 and 2014, high global prices for minerals and petroleum favored the development of these sectors at the expense of others. In 2014, however, with falling international prices and the devaluation of the peso, Colombian leadership realized that the country could not concentrate all its efforts and investments on oil and mining. Colombia then began to develop its production capabilities for consumer products such as food, drinks, toiletries, and cosmetics. Moving forward, these products will provide significant added value to the nation’s economy.

When global prices are again favorable, mining will likely offer economic development opportunities for Colombia. The industry, however, needs to address the environmental and social impact of illegal gold mining activities. The effects left by nonregulated exploitation are substantial, and inhibit the country’s social development.

Colombia invested heavily in Reficar’s construction, which eventually cost $8 billion. While the country’s investment promises to increase the value of the chemical industry, value creation depends on reaching projected production levels, and doing so efficiently. Colombia’s current oil reserves are also a concern. It is imperative that the country invest in finding new oil and gas wells and investigate exploiting nontraditional production wells.

Given its geographical position, diversity of agricultural products, and reasonable labor costs, Colombia can be competitive in developing its food, beverage, and consumer products industries, as long as it is committed to the necessary investment and research. The agricultural sector, which provides raw materials for the country’s consumer products industry, also requires ongoing investment. The required economic investments, which offer a path to prosperity for Colombia, are of a manageable size and do not require taking on excessive debt. It may also be possible to find national and international investors willing to assume the moderate risk of these sectors.