Drug addiction has reached epidemic proportions worldwide, with dire consequences for individual addicts, communities, and entire societies. The addiction epidemic threatens to destabilize not only healthcare, but also economic welfare. Because chemical engineers have a duty to serve the public and address pressing societal needs, it is critical that they develop processes and products to help prevent and address drug addiction.

This article describes the current state of the addiction epidemic and its history; discusses biochemical engineering processes for the biosynthesis of therapeutics with lower potential for addiction; and touches on the chemical engineer’s or industrial professional’s obligation to communicate with the public about drug addiction.

A state of emergency

Statistics on addiction and deaths from overdoses reveal the extent of the emergency. In 2015, according to the U.S. Dept. of Health and Human Services’ National Survey on Drug Use and Health (NSDUH) (4), approximately 27.1 million people — or one in ten people in the U.S. aged 12 or older — reported using an illicit drug in the past month (5). About one in 12 people, or over 8% of the U.S. population, required substance use treatment in 2015. 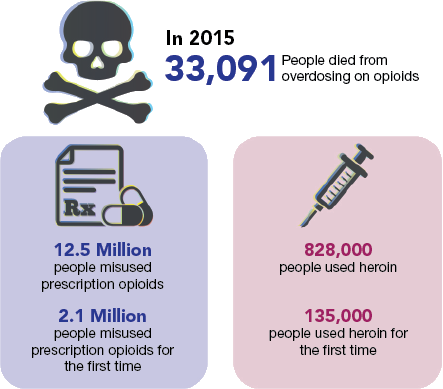 ▲Figure 1. The opioid epidemic is a major problem in the U.S., where misuse of prescription opioids accounts for the largest number of overdose deaths. Source: Adapted from (7).

The top drug of choice was marijuana, followed by prescription pain relievers, the survey found. An estimated 21–29% of patients who were prescribed opioids for chronic pain abuse the drugs (6). Moreover, prescription painkillers are often a gateway to heroin use; about 80% of people who use heroin first used prescription opioids (Figure 1) (7, 8). 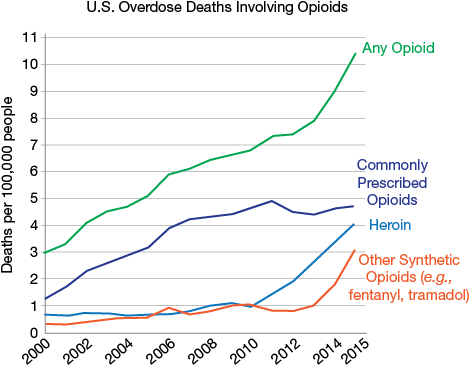 ▲Figure 2. Prescription opioids continue to be involved in more overdose deaths than any other drug. Fueling the opioid epidemic is an overall increase in deaths from prescription opioid overdoses and a recent surge in overdoses on heroin and illegally made fentanyl. Source: (11). 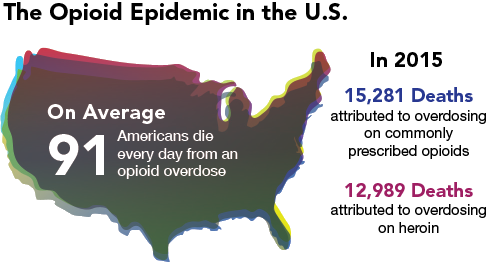 ▲Figure 3. According to data from 2015, each day, over 90 Americans die from an opioid overdose, whether from prescription opioids, heroin, or fentanyl. Source: Adapted from (7, 12).

Abuse of opioids — including prescription pain relievers, heroin, and synthetic opioids such as fentanyl — has raised particular alarm due to its devastating, widespread, and rapidly expanding impact. Since 1999, the number of opioid overdoses in the U.S. has quadrupled (Figure 2) (11). Each day, over 90 Americans die after overdosing on opioids (Figure 3) (7, 12). Opioid use is increasingly involved in cocaine overdose deaths as well (12). 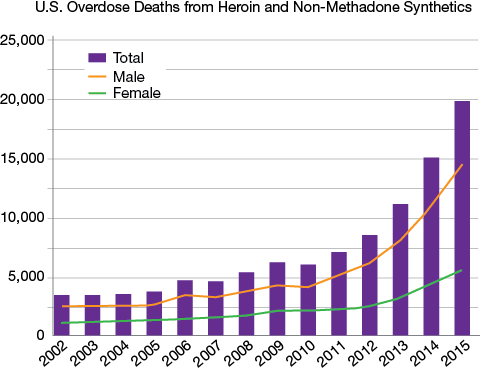 ▲Figure 4. From 2002 to 2015, there was a 5.9-fold increase in the total number of U.S. overdose deaths involving heroin and non-methadone synthetics, primarily fentanyl. Source: (12).

Compounding the problem is fentanyl, which is becoming more prominent in overdose deaths (Figure 4) (12). Fentanyl is a prescription pain reliever, originally developed under a patent held by Janssen Pharmaceuticals, that is 50 to 100 times more potent than morphine. While fentanyl is approved for treating severe pain, typically in advanced cancer patients, it is sold illegally for its heroin-like euphoric effects. Illegally made fentanyl is often mixed into heroin, or sold in counterfeit prescription opioid pills (13).

The drug addiction problem is not a new one, but views toward addiction have changed considerably over the years.

The 18th-century philosopher Jonathan Edwards regarded “desire” and “will” as isomorphic: Individuals would never will anything contrary to their desire, nor desire anything contrary to their will. This traditional view equated desire with choice, and for centuries addiction was seen as a social issue to be solved by individual self-control. Consequently, in the 1800s, opium was freely available and widely used by the general public. Even Thomas Edison and Benjamin Franklin were said to be regular users.

As the personal and societal fallout of addiction became more widespread, the zeitgeist shifted, and society began to acknowledge that opioid addiction was a significant problem that needed to be...