Back To Basics
November
2017
Ben Janvier

Cogeneration — the process of using steam to turn turbines and generate power — allows a plant to reduce its reliance on external electrical energy purchases. This article discusses best practices for the selection, operation, integration, and control of steam cogeneration systems.

A typical fossil-fuel power plant has an average thermal-to-power efficiency of 35–45%, because its steam turbine can only extract so much electrical energy from high-pressure steam, and because the low-pressure steam that exits the turbine cannot be used. Therefore, the steam exiting the turbine must be condensed, and its potential energy is lost.

Industrial plants, however, have a competitive advantage over power plants because they have several process units that can use the lower-pressure outlet steam, which eliminates the need for inefficient steam condensing.

In a cogeneration system, steam that passes through the turbines is maintained at an outlet pressure high enough to be used by process units. Because energy at the turbine outlet is re-used, cogeneration systems have overall efficiencies that can be higher than 85%, which allows industrial plants to generate electrical power at lower-than-market costs.

The thermodynamics of cogeneration

An understanding of the basic thermodynamic terms and concepts is needed to analyze a turbine’s energy conversion efficiency.

A steam turbine that has a 100% isentropic efficiency is capable of extracting all of the potential power present in the steam. In this hypothetical case, the inlet entropy will equal the outlet entropy. A turbine with an efficiency of 0% is incapable of converting thermal energy into power. This is called an adiabatic process, in which the inlet enthalpy and the outlet enthalpy are equal. 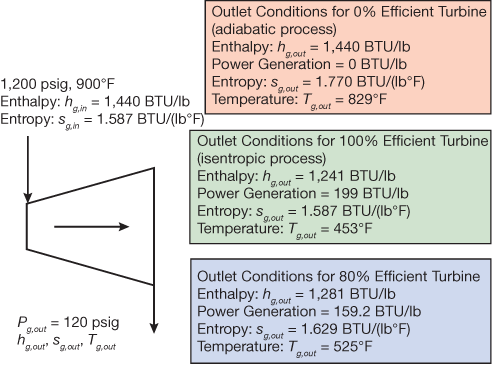 ▲Figure 1. The amount of power generated and the steam outlet conditions will vary for a steam turbine at 0%, 80%, and 100% efficiency. 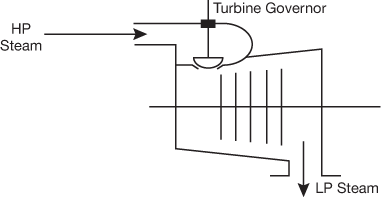 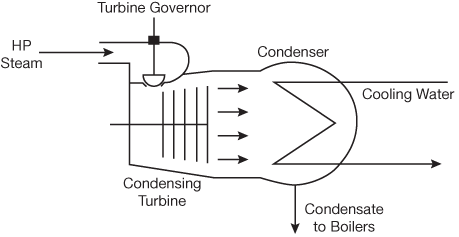 ▲Figure 3. In a condensing steam turbine, high-pressure (HP) steam is fed to the turbine and the outlet steam is condensed.

There are two main types of steam turbines: backpressure and condensing. In a backpressure turbine, the outlet of the turbine is connected to a header that distributes steam to the various process users (Figure 2). In a condensing turbine, outlet steam is sent to a condenser operating under vacuum (Figure 3).

These simple backpressure or condensing turbines are typically only used in simple steam systems. In more-complex applications, multiple backpressure turbines can be combined in series to form a single turbine with multiple steam outlets. Turbines with multiple outlet ports are called extraction turbines; these are frequently used for cogeneration because they allow steam to be extracted at one or more intermediate points in the turbine casing. 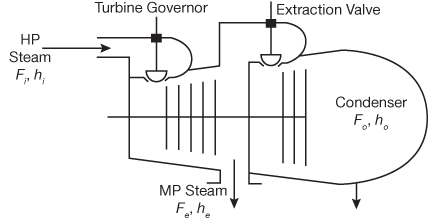 ▲Figure 4. This condensing steam turbine has one medium-pressure (MP) extraction point. Throttling the extraction valve can control the MP extraction steam flow, and with it, the pressure of the MP header.

There is virtually no steam production or loss in a steam turbine. Therefore, in Figure 4, the inlet steam flow (Fi) is equal to the sum of the extraction steam flow (Fe) and the condenser flow (Fo):