Several aspects of chemical processing make control and automation in the process industries different from other types of machine and equipment control. This article focuses on the factors related to process dynamics.

However, the technologies and techniques developed and studied by electrical engineers do not provide effective solutions to the control problems encountered in the process industries. Five aspects of chemical processing contribute to the unique nature of process control:

This two-part article explains these factors and why they are relevant to the practice of process control. Part 1 covers the first three — disturbances, transportation lag, and process dynamics — which pertain to the dynamic behavior of the process. But contrary to common belief, the practice of process control involves more than process dynamics. The last two factors relate largely to the steady-state behavior of the process and are covered in Part 2, which is scheduled to appear in the April issue. (Part 2 can be viewed online with Part 1 at www.aiche.org/cep). 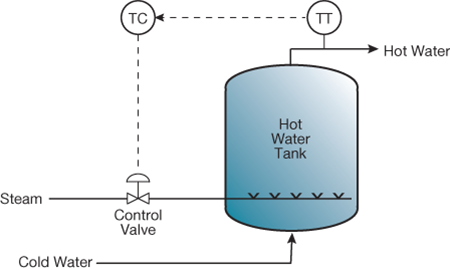 ▲Figure 1. Steam is injected into a tank to produce hot water.

By driving the control error to zero, the hot water temperature controller can respond to changes in two distinct inputs to the loop:

Sometimes called the load, the hot water demand is the process throughput and is a member of a class of inputs known as disturbances. Other disturbances include the cold water inlet temperature, the steam pressure, and the steam enthalpy. All industrial processes are subjected to a variety of disturbances; some disturbances can be measured, but for others, measurement is either impossible or impractical.

The temperature controller in Figure 1 is expected to expeditiously implement each change in the setpoint, as well as respond to disturbances such as changes in the hot water demand. This expectation applies to most loops in process plants. Thus, the focus here is on loops for which an expeditious response to any change is desired.

Exceptions exist — for example, the level loop in a surge vessel, whose purpose is to smooth changes in the input flows while maintaining a discharge flow that changes as little and as slowly as possible. The surge vessel level controller does not respond to each individual change in input flow, but instead makes small adjustments to the discharge flow in response to changes in the long-term mean of the input flows. Such loops are the exceptions and beyond the scope of this article.

For utilities, such as steam boilers, compressed air, or cooling water systems, the major disturbances are usually throughput changes. Changes in the setpoint are rare. The hot water process in Figure 1 is a utility process. The consumers expect the temperature of the hot water to be close to a certain value. Likewise, the consumers of steam expect the steam pressure to be close to a certain value. The expected values change infrequently, making changes in setpoints infrequent and small. The primary purpose of the controller is to respond to changes in the demand for the utility.

Continuous processes are operated at reasonably constant throughputs, but otherwise are similar to utility processes. After startup, setpoint changes are small and infrequent. The primary purpose of the controls is to respond to the myriad disturbances — most of which are minor, but occasionally a major one occurs. In batch processes, setpoint changes are common, but the controls must also contend with disturbances.

Safety risks and economic costs make shutting down a process when a pressure relief device needs to be isolated or removed less than ideal. Several alternative methods are available that will enable you to isolate these devices while continuing to run your process.

Several aspects of chemical processing make control and automation in the process industries different from other types of machine and equipment control. This article focuses on the factors related to process dynamics.

This article reviews the unit operations in a wastewater treatment plant, and describes the fundamental biological and chemical principles behind treatment technologies.

Use advanced scheduling and enterprise resource planning applications to optimize your manufacturing schedule and improve profitability, operational efficiency, and sustainability.

Finding a balance between work and your personal life is critical to your happiness and well-being, as well as the success of your company.

Meet Teressa Szelest of BASF Corp., who talks about innovation strategy and how BASF balances quarterly results with investments in long-term research and development.

Patent Update: Infringement: When Can the Actions of One Be Attributed to Another?

Process Safety Beacon: How Could This Happen? The Temperature was Below the Flashpoint!

An oxidation reaction in an atmosphere of pure oxygen at 250 psig (1,825 kPa) was being carried out in a 10-gal (~38-L) agitated vessel at a pilot plant in 1986. It was thought that the vessel atmosphere was safe from ignition because the vessel was operating at 50°C below the flashpoint of the...

YPOV: Should You Pursue PE Licensure?