Quantitative risk analysis (QRA) is a technique for quantifying the risk that a particular process or operation poses to an individual and population. QRA was developed in the 1970s for the aerospace, electronics, and nuclear power industries, and in the 1980s was refined for use in the chemical and petrochemical industries.

This article identifies the steps involved in a QRA and provides guidance on conducting the analysis. It also explains the value in closely examining QRA results to better understand, manage, and mitigate risks at a chemical processing facility. Reference 1 provides more detail on performing QRAs.

Risk, as it relates to the chemical process industries (CPI), is a measure of the magnitude and likelihood of economic loss or human injury. It can be thought of as the product of probability and consequence. Risk can be described in qualitative terms (e.g., low, medium, high), such as is typically done in a process hazard analysis (PHA). Or, in the case of a QRA, it can be described quantitatively (e.g., likelihood of a fatality per year). Risk can be measured in terms of fatalities, dangerous dose, or financial impact.

The U.K. Health and Safety Executive defines individual risk as “the risk of some specified event or agent harming a statistical (or hypothetical) person assumed to have representative characteristics (2).”

When considering individual risk, it is common to assume that the recipient is outside 24 hr/day, and that they take no protective action in the event of a loss-of-containment scenario. Individual risk does not account for the actual population present within and surrounding a facility. 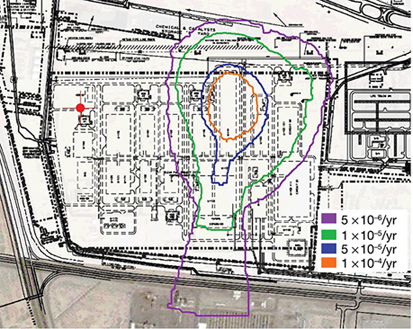 ▲ Figure 1. Individual risk can be shown graphically on a risk contour plot. In this example, an individual located on the inner-most contour has a 1-in-10,000 chance of fatality from the loss-of-containment scenario modeled.

Individual risk results are typically reported as likelihood of death (or dangerous dose) per year, and can be presented in the form of risk contours (Figure 1). Each contour ring on the plot represents a likelihood of death. For example, a person on the inner ring of the contour plot in Figure 1 would have a 1-in-10,000 chance of being killed by a loss-of-containment scenario at the particular facility being considered. As an individual moves further away from the facility, their risk decreases.

The U.K. Health and Safety Executive defines risk as “the risk of widespread or large-scale detriment from the realization of a defined hazard (2).” 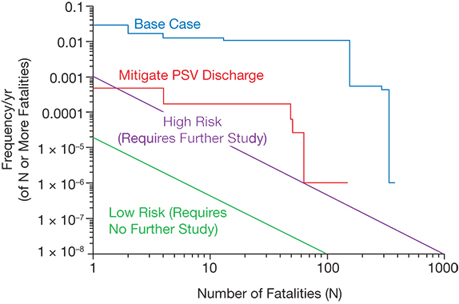 ▲ Figure 2. Societal risk is typically shown on an F-N plot. The x-axis represents the number of fatalities (N) and the y-axis is the frequency of N or more fatalities per year. The base case risk results (blue line) fall outside of the risk criteria (purple and green lines). Even if the safeguards being considered to mitigate a discharge are implemented, the societal risk (red line) would still fall outside of the upper risk criteria.

Societal risk accounts for the population present within a particular distance from the facility of interest. It is typically reported as an average (average rate of death or potential loss of life) and can be presented on an F-N plot (Figure 2), where the x-axis is the number of fatalities (N) and the y-axis represents frequency of accidents involving N or more fatalities per year. The two straight lines in Figure 2 are tolerability criteria.

During a QRA, the risk is determined for various loss-of-containment scenarios individually (e.g., leak from failed piping). The risk from all of the loss-of-containment scenarios are summed to calculate the cumulative risk for the entire facility or for a specific operating unit. The risks can also be sorted to determine the risk for a particular condition (e.g., time of day, weather condition, etc.).

▲ Figure 3. The QRA process follows a well-defined set of steps. The process requires much work but is valuable in understanding and managing a facility’s risks.

QRAs follow a well-defined methodology. After defining the system to be analyzed, which could be an entire facility, a process, or a single operating unit, the QRA involves several steps (Figure 3, next page):

Once the potential loss-of-containment scenarios have been identified, the team conducting the QRA will determine the frequency and consequences for each scenario,...