In a future hydrogen-based economy, energy needs would be met by oxidizing hydrogen in a fuel cell, rather than combusting a carbon-based fuel. Since hydrogen is not available freely in nature, it must be produced from an energy source, and it can be carbon-intensive or carbon-free, depending on the energy source employed.

Fuel cells are central to a hydrogen economy. They convert the chemical energy in a fuel directly into electricity that can be used for stationary, mobile, or transportation applications (Figure 1). Energy is created via two half reactions. At the anode, a stream of hydrogen is split into protons and electrons. The electrons are forced through a circuit, producing energy:

At the cathode, the protons react with oxygen to produce water as a byproduct. 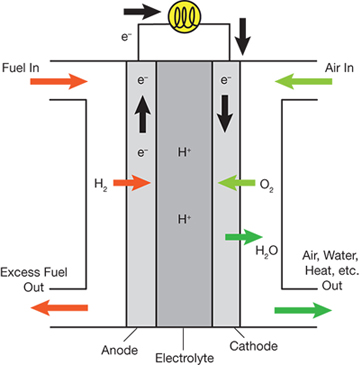 ▲ Figure 1. Hydrogen enters the fuel cell and is oxidized at the anode to form protons. The electrolyte material conducts ions, but not electrons, so electrons are forced into the external circuit. At the cathode, oxygen is reduced to water.

Unlike fossil fuel combustion, hydrogen fuel cells produce power with no emissions of nitrogen oxides (NOx), sulfur oxides (SOx), particulates, or carbon dioxide (CO2). (The production of hydrogen, however, does produce emissions.) Low emissions are just one driver behind fuel cells and the hydrogen economy; efficient power production, reliability, and energy storage capabilities are also steering this technology toward commercialization.

This article describes how hydrogen is produced and how it is converted to power in a fuel cell, the various types of fuel cells, and the obstacles that need to be overcome for a hydrogen economy to become a reality.

Hydrogen for fuel cells can be produced commercially by reforming hydrocarbons, gasification, or electrolysis of water. Investigations continue into other methods, such as thermochemical or photochemical water-splitting and thermolysis of methane.

Reforming. Most hydrogen is currently produced by steam methane reforming (SMR). At high temperatures (700–1,100°C) and in the presence of a metal-based catalyst, steam reacts with methane to form carbon monoxide and hydrogen. Additional hydrogen is recovered via a water-gas shift reaction (WGS) that also yields CO2. Together the overall reaction is:

Gasification. Synthesis gas (or syngas, a mixture of CO, CO2, and H2) can be produced by the gasification of solid fossil fuels, such as lignite coal, or other solid hydrocarbons, such as biomass or municipal solid waste (MSW). The syngas can be converted into hydrocarbons (via the Fischer-Tropsch process) or combusted to produce heat and power (such as in integrated gasification combined-cycle [IGCC] plants), or the hydrogen can be separated for use in a fuel cell.

Electrolysis. Hydrogen can also be produced by electrolysis of water — a process that is essentially a fuel cell in reverse. Similar to fuel cells, electrolyzers can operate at low, intermediate, or high temperatures, with various solid or...