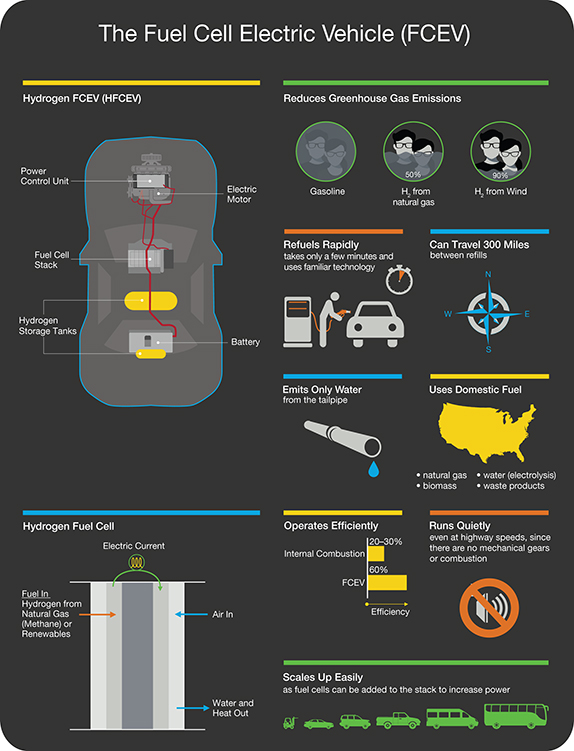 Hydrogen fuel cell electric vehicles (HFCEVs) are more energy efficient than conventional gasoline internal combustion engine vehicles (ICEVs), which are limited by the Carnot thermal engine efficiency, and they produce no tailpipe emissions other than water vapor. Hydrogen fuel can be produced from a variety of non-fossil and renewable feedstocks that are widely available, and could help to reduce the transportation sector’s dependence on petroleum-based fuels and increase the security of the energy supply.

A HFCEV consists of six major components: a hydrogen storage tank, air intake system, fuel cell stack, power control unit, battery, and electric motor. The HFCEV uses proton exchange membrane (PEM) fuel cell technology to convert the chemical energy of hydrogen into electricity. Hydrogen from the onboard storage tank reacts with oxygen pulled in through the air intake system to generate electricity via an electrochemical process that occurs in the fuel cell stack. The only byproduct of the process is water vapor, which exits the fuel cell stack into the atmosphere.

The electricity the fuel cell generates is managed by the power control unit, which conditions the electricity and either charges the battery, powers the motor, or both. Although the battery is not a major source of power for the HFCEV, it is used to store excess electricity, allows the fuel cell to operate near its peak efficiency, and supports other functions of the vehicle. The electric motor converts the electric energy into mechanical energy, propelling the vehicle (1).

Although current gasoline-powered vehicle technologies have shorter fueling times and longer driving ranges than many of the alternative zero-emission vehicle technologies, they produce tailpipe emissions, such as greenhouse gases (GHGs). HFCEVs can achieve fueling times and driving ranges similar to those of gasoline ICEVs while eliminating tailpipe emissions and reducing the well-to-wheels (WTW) GHG emissions (2). HFCEVs are able to provide a consumer experience similar to that of gasoline-powered vehicles, while reducing the environmental impacts of the transportation sector.

The Society of Automotive Engineers (SAE) has developed protocols to control the fueling process (4), and fuel station developers are building facilities to fuel 700-bar HFCEVs using those standardized fueling protocols. The fueling protocol, SAE J2601, establishes a set of performance parameters that need to be met and maintained in order to dispense the necessary amount of hydrogen in the shortest possible time while ensuring the safety of the filling process.

The thermal diffusivity of a Type IV tank is very low, enabling a near-adiabatic fueling process. The increase in pressure during the short fueling event raises the temperature of hydrogen within the tank considerably (5). Type IV, 700-bar tanks have a maximum operating temperature of 85°C. At that temperature, the corresponding fill pressure can be as high as 875 bar at the end of a fill. To keep the temperature in the vehicle’s tank below 85°C and also enable fast fueling within 3 to 5 min, hydrogen is precooled to –40°C before it is dispensed. The SAE J2601 protocol considers the tank characteristics, station precooling capabilities, and ambient temperature in determining...