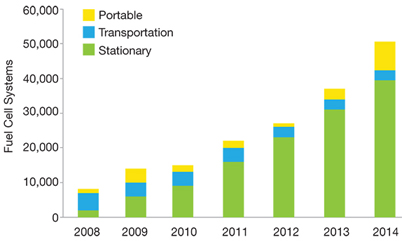 ▲ Figure 1. The global fuel cell industry has experienced consistent growth since 2010. The growth in stationary systems is due in part to thousands of small stationary fuel cells being sold in Japan, subsidized by the Japanese government, to provide reliable power and heat for homes.

After decades of development, hydrogen fuel cell technologies are becoming an established commercial reality. Global fuel cell industry revenues surpassed $2.2 billion in 2014, with more than 50,000 fuel cell systems shipped worldwide and consistent annual growth in shipments of almost 30% since 2010 (Figure 1) (1). Fuel cells for stationary power have been the pre-dominant application to date, but now some major automakers are providing commercial fuel cell electric vehicles (FCEVs) for sale or lease (1).

Government-funded programs worldwide, including those through the U.S. Dept. of Energy (DOE), ramped up their efforts in the past decade, injecting vital funds and encouraging initiatives to accelerate commercialization and bridge the gaps in research and development. How did it all begin, where are we now, and what more is required to make hydrogen fuel cell technology part of our everyday lives?

Fuel cells convert the chemical energy from a fuel into electricity, without the need for combustion, thereby generating power at high efficiencies and with low or even zero emissions (depending on the fuel). Fuel cells are characterized by their chemical reaction, electrolyte, and operating temperature, among other properties (Table 1).

Fuel cells can use diverse domestic resources as fuel, are quiet with no moving parts, and are scalable — allowing them to provide power for applications ranging from small-scale portable power to large-scale stationary power plants. They can also be used in automotive applications and to ensure grid resiliency, since they have excellent transient response and quick startup times, depending on their operating temperature. For light-duty vehicles, fuel cells are currently the only zero-emissions technology that meets customer demands for long driving ranges, fast fueling, outstanding fuel economies, and high performance. High-temperature fuel cells are often used for combined heat and power (CHP) applications in industrial plants and commercial buildings.

The need to reduce carbon emissions, pollutants, and petroleum dependence, as well as the need for highly reliable power, drive the development and deployment of fuel cell technologies.

Production. Hydrogen has the highest energy content on a per-mass basis of any fuel — nearly three times more than gasoline. Because it is a light, low-density gas,...