Process Safety Beacon: A Plugged Line or Equipment is More than Just a Nuisance | AIChE
Skip to main content

Approximately 1 hr after process startup at a facility that produced plastics, an extruder downstream of the reactor was malfunctioning. The process was aborted and an unusually large amount of partially reacted waste was diverted to a polymer catch tank. Inside the tank, hot molten plastic continued to react, and slowly began to decompose, generating gases and causing the contents to foam. 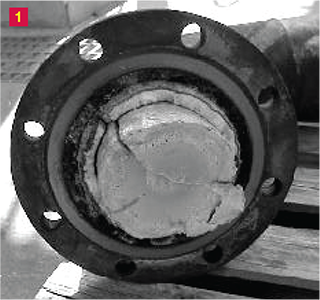 ▲Figure 1. In this particular incident, the vent line was obscured by layers of polymer.

The foam filled the tank and plugged the vent line and relief devices on the surge tank, solidifying as it cooled (Figure 1). As the off-spec product released gases, pressure in the tank increased, but the pressure gauge on the tank was also plugged and did not register the pressure increase. 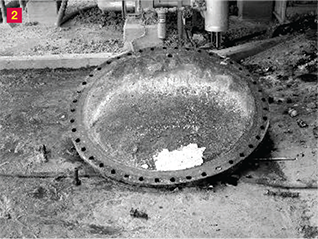 ▲Figure 2. Built-up pressure inside the tank caused the polymer catch tank cover to blow off.

When maintenance personnel came to clean out the surge tank, the residual pressure blew the heavy, partially unbolted tank cover off as they tried to open it (Figure 2). Hot plastic was expelled and the force of the release caused nearby tubing to break. Hot fluid from the tubing ignited, resulting in a fire. All three personnel were killed in the incident.

When equipment plugs, other equipment may be plugged too!

©AIChE 2019. All rights reserved. Reproduction for non-commercial, educational purposes is encouraged. However, reproduction for any commercial purpose without express written consent of AIChE is strictly prohibited. Contact us at ccps_beacon@aiche.org or 646-495-1371.