Thailand has a significant economic presence in Asia, with a gross domestic product (GDP) ranking in the region’s top ten. The country’s petrochemical industry, which accounts for about 5% of its GDP, has a long history of growth and development (1). This article offers insights into Thailand’s economic background, discusses the trends, policies, and challenges that impact the Thai chemical industry, and includes perspectives from industry executives and experts on its future prospects.

With an estimated population of 69 million (2), Thailand has the second-largest economy in southeast Asia, behind Indonesia. Its GDP per capita of US$5,900 (3) places the country fourth in the region, behind Singapore, Brunei, and Malaysia. 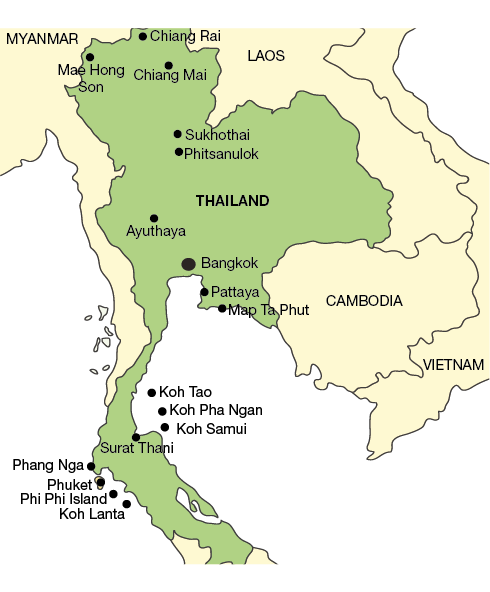 ▲Figure 1. Thailand has several major chemical and petrochemical industry complexes. The site located in Map Ta Phut (MTP) is one of the largest and best developed in Asia.

At the time, the industry served a domestic market and investments were made through public- and private-sector cooperation. The feedstocks were gas-based ethane and propane, while products were basic commodities such as olefins and derivatives.

When the petrochemical sector shifted its strategic focus from domestic consumption to exports, the government moved forward with NPC-II. The private sector participated directly in petrochemical and related manufacturing activities. Aromatics (Thailand) Co. (ATC) was established in 1989, and Thai Olefins Co. (TOC) was founded in 1990; both produced raw materials needed for intermediate and downstream industries. From 1989 to 1995, Thailand’s manufacturing base grew to replace imports for a wide product range. From 1995 to 2004, petrochemical companies began increasing exports as world economies expanded international trade. During this liberalization of trade, the industry attempted to strengthen its international marketing capabilities.

The Thai government has developed a master plan with a focus on increased competitiveness, asset integration, and strategic alliances. To achieve these goals, additional research is required for sophisticated product development in new grades of polyethylene (PE), polypropylene (PP), and polyvinyl chloride (PVC). A close assesment of deeper downstream petrochemical value chains, including phenol, ethylene oxide and glycol, propylene oxide and glycol, polyols, and polyurethane products, is also necessary.

Higher demands for diversified intermediate and downstream petrochemical products have increasingly shifted the petrochemicals feed slate toward a higher proportion of liquid feedstocks. 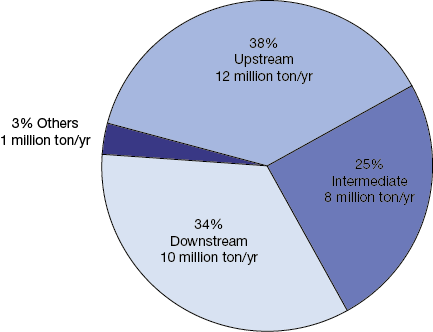 ▲Figure 2. Upstream olefins, including ethylene and propylene, account for just over one-third of Thailand’s petrochemical capacity, while downstream products, such as polystyrene and nylon, represent another one- third. Intermediates and other chemicals, such as acrylonitrile and polyol, make up the balance of capacity. Source: (5).

Today, the Thai petrochemical industry is well-developed, and includes upstream, intermediate, and downstream petrochemicals. As of 2016, upstream olefins such as ethylene and propylene were produced in the largest volumes, with operating capacities of 4.44 million ton/yr and 2.85 million ton/yr respectively (Table 2, Figure 2).

While the Thai petrochemical industry produces mainly standard commodity chemicals, the crude oil price spike of 2009–2010 sparked interest in fuels and chemicals produced through biomass or biochemical processes. This spurred research and commercialization that continues today.

Thailand has abundant biofeedstock resources, such as sugar cane, cassava, molasses, and other natural products. The Thai government aims to promote the production of chemicals derived from these biofeedstocks. The country also has one of the largest bioethanol industries in Asia, producing 322 million gallons in 2016, along with a strong palm-based biodiesel industry. 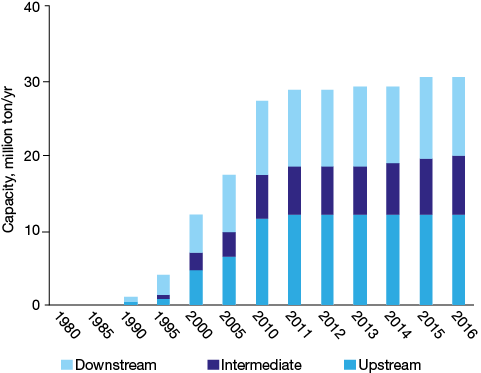 ▲Figure 3. Thailand’s petrochemical capacity grew rapidly through 2010 and since then has remained relatively flat. Source: (5).

Figure 3 shows the growth in Thailand’s petrochemical capacity. After completion of new crackers in 2010, this capacity has remained relatively flat. At that time, environmental constraints began to limit the country’s ability to build or add new capacities in the overloaded MTP area. 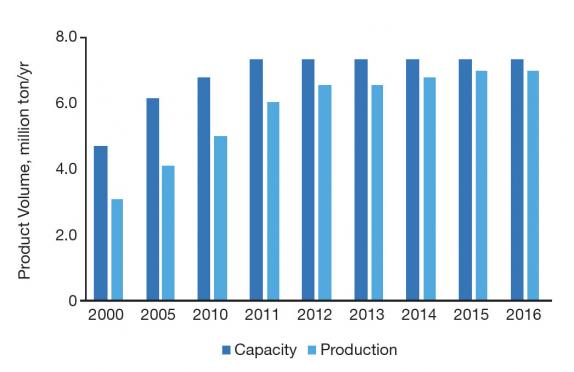 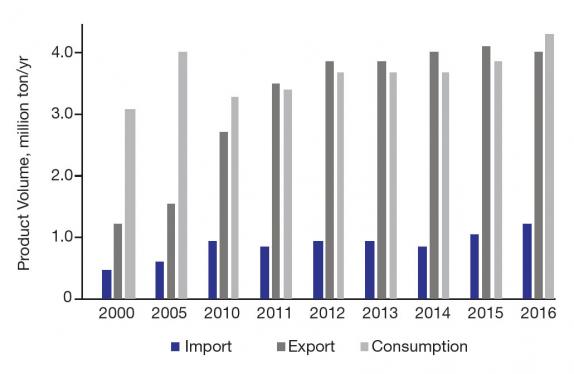 ▲Figure 4. Capacity utilization has remained high since 2012 and Thailand continues to export about half of the petrochemicals produced (5). 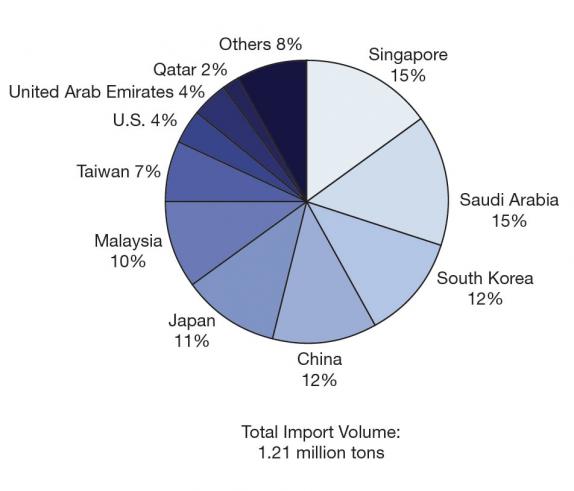 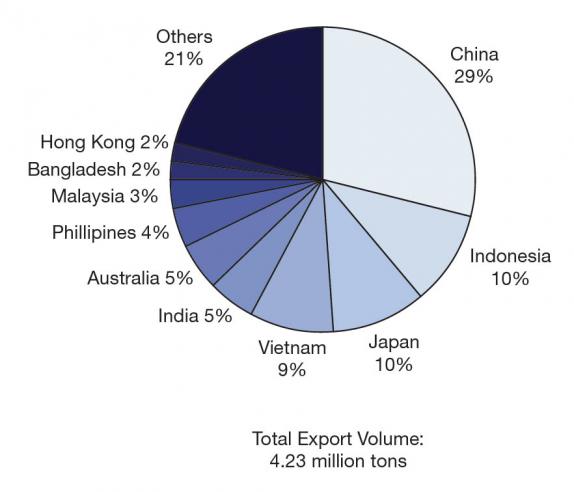 ▲Figure 5. Singapore, Saudi Arabia, South Korea, and China provide the majority of Thailand’s chemical imports of polyethylene (PE), as well as polypropylene (PP) and polystyrene (PS). In 2016, over half of Thailand’s polymers exports went to China, Indonesia, Japan, and Vietnam. Source: (5).

The Thai petrochemical industry had expanded significantly with new mega-plant projects starting in the 1990s and continuing through 2008.

Nevertheless, Thailand’s GDP per capita continues to stagnate in the middle-income range (US$4,000–10,000). To move the country out of this middle-income trap, the Thai government established “Thailand 4.0,” a 20-year economic development plan.

It aims to steer Thailand into a more innovative and science- and technology-based economy, with a goal to increase research and development investment from 0.6 % to 1% of GDP. R&D was previously funded mostly by the public sector; but, the private sector is stepping up and increasing its R&D investments to meet the national goal.

However, in December 2009, a Supreme Administrative Court ruling suspended or delayed 76 new MTP industrial projects because environmental and health concerns were not fully addressed during project planning.

Though this issue has been resolved, it has created more stringent environmental impact assessment (EIA) requirements and higher hurdles for building new petrochemical plants in the MTP area.

Thailand has limited access to low-cost petrochemical feedstocks. Therefore, it needs to strengthen its chemical industry through R&D and technological innovations.

Leading Thai petrochemical companies, including PTTGC, SCGCH, and IRPC, have increased R&D investments, from 0.3% to 1% of total sales.

SCGCH and PTTGC are endeavoring to reduce commodity chemicals production and increase production of high value-added (HVA) products, such as methyl methacrylate (MMA), propylene oxide (PO), and acrylonitrile. The Thai petrochemical industry is also facing other challenges, including:

The Thai petrochemical industry should continue to grow and benefit from stable crude oil and natural gas prices, which will ultimately also influence the industry’s future concerning:

Three experts shared their views on the industry’s outlook, trends, and challenges.

Pailin Chuchottaworn was the CEO of PTT, Thailand’s national oil company, from 2011 to 2015. He believes a disruption from the electric vehicle (EV) industry may reduce future demand for Thai fossil fuels, causing exploration and refining companies to reduce fuels production capacity significantly.

Liquid fuels would no longer be the energy form of choice. Safer, autonomous driving technology should allow for the use of more plastics in automobile parts instead of steel. This prediction indicates that the petrochemical industry should remain healthy.

Tevin Vongvanich, PTT’s CEO from 2015 to 2018, anticipates that Thailand 4.0 and EEC policies could help accelerate GDP growth and strengthen Thailand’s position as the geographical hub for continental Asia.

Vongvanich notes that in 2011, PTT merged PTTAR with PTT Chem to form PTTGC, as part of its strategic plan to integrate the refinery and petrochemical businesses and expand into more specialty chemicals and materials.

Today, he sees EV and green plastics recycling technologies as the key technologies likely to impact the petrochemical industry. PTTGC recently invested in Natureworks for its PLA bioplastics, and in Perstorp (Vancorex) for its toluene di-isocyanate (TDI), which can be used to produce polyurethanes.

Suracha Udomsak is the current President of the Thai Institute of Chemical Engineering and Applied Chemistry (TIChE). He expects SCGCH to grow its petrochemical revenues by expanding to southeast Asian countries (e.g., Vietnam and Indonesia) and diversifying existing polymer product lines into new markets and new applications.

He also believes the Thai petrochemical industry will likely continue to perform well in the future due to growing plastic demands. However, he expects a more efficient recycling-based economy will be the key to sustainable development.

Faced with domestic and international challenges, Thailand’s petrochemical companies are seeking new opportunities abroad, including joint venture deals and mergers and acquisitions to extend and strengthen product and technology portfolios. With such plans underway, the country will continue to be a major petrochemical producer and exporter of petrochemical products for Asia.

The author thanks Prapai Numthavaj and Siri Jirapongphan of the Petroleum Institute of Thailand (PTIT) for extensive data support, as well as Pailin Chuchottaworn, Tevin Vongvanich, and Suracha Udomsak for their insights.

Designing an insulation system is more nuanced than simply selecting a material that has a maximum use temperature above the operating temperature of your system.

Jell-O salads — neatly chopped vegetables, canned or fresh fruits, and cubes of meat or fish encased in shiny gelatin shaped into decorative molds — have, as Laura Shapiro says in her book Perfection Salad, “congealed in the decorative mold of history.” The once-ubiquitous buffet staple owed...

Challenges and Opportunities in a Legacy Sector

The food industry currently favors established companies, methods, and technologies, but increasing consumer interest in health and sustainability is demanding innovation. This is an opportunity for companies that can provide transformative innovation and disrupt the status quo.

The scraped-surface freezer is at the core of ice cream production. Understanding and controlling this operation and the storage conditions of the final product are critical to creating the smooth and creamy treat consumers expect.

Winemaking at small scales can produce wines of distinction. Finding and managing exceptional vineyard sites is a critical first step in the winemaking process. Good grapes coupled with small-scale fermentations and smart cellar practices can produce compelling and interesting wines.

The demand for aquaculture seafood is expected to increase to feed the growing global population. Producing this food source will require a supply of advanced protein ingredients to supplement or replace fishmeal. Single-cell proteins (SCP) could meet this need while leveraging the corn ethanol...

Food contacts many inert surfaces that direct flow or induce turbulence during processing. These surfaces could be modified to provide additional capabilities. The feed spacer material of spiral-wound membranes used in dairy applications is one such surface that could be functionalized to mitigate...

The food industry has embraced high-pressure processing (HPP) as a food safety technology. HPP may also help satisfy consumer demand for clean-label products that are safe, nutritious, and don’t include synthetic chemicals.

Vapor-Phase Nonideality: When to Worry

Should you account for vapor property nonidealities in chemical process simulations? The answer will depend on the degree of uncertainty allowed in your system.

Process Safety Beacon: Surrounded by Too Many Warning Signs?