Combined heat and power (CHP) systems generate electricity or mechanical power and useful heat from a single source of energy. The system may take a variety of configurations that include gas-turbine generators (GTGs), heat-recovery steam generators (HRSGs), boilers, and steam-turbine generators (STGs).

A gas-turbine CHP plant (Figure 1a) combusts a mixture of fuel gas and air in the combustion chamber of the turbine. The combustion product flows through a series of blades attached to a rotating shaft and generator, which generates both power and hot fluegas that exits through the exhaust system. The high-energy exhaust gas is captured in an HRSG to heat boiler feedwater and produce steam. The steam can be used to drive a STG and produce electricity, which is called a combined cycle; or, it can be sent to a process plant for heating in a heat exchanger or to drive rotating equipment, such as pumps and compressors, which is called cogeneration. 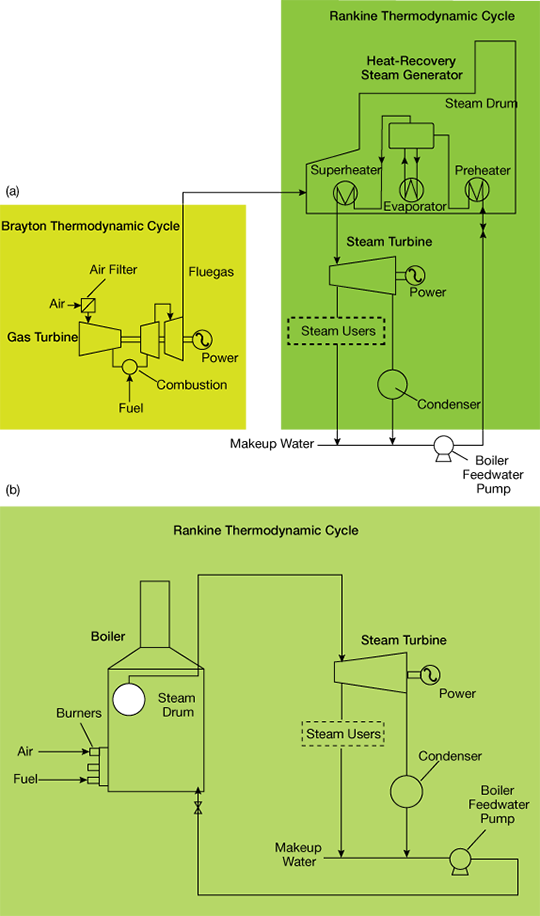 ▲Figure 1. (a) Gas-turbine combined heat and power (CHP) plants generate power and hot fluegas from combustion. The fluegas is used to produce steam in a heat-recovery steam generator (HRSG), which can be used for heating, to generate electricity, or to drive rotating equipment. (b) Boiler CHP plants produce steam primarily to drive turbines and produce power, but some steam may be extracted for process heating.

A boiler CHP plant (Figure 1b) is an alternative type of system, in which one or more boilers generates steam. The steam is used to drive STGs for power generation. In some configurations, steam is extracted from the STG for process heating via heat exchangers.

Most of Saudi Aramco’s facilities use a combination of gas turbine and boiler CHP systems. It is necessary to build models for these systems to:

The ratio of a fermenter’s liquid height to diameter can impact its heat-transfer surface area, blend time, and required agitator power. This article describes the factors that go into determining the optimum aspect ratio for a given set of conditions.

Understanding differences in microbial hazards and handling procedures is key to ensuring occupational safety when working with biohazard materials.

Manage the Risks of Severe Wind and Flood Events

In the chemical process industries, natural disasters are commonly thought of as “Acts of God.” However, the risks of such events can be diminished with the right planning and preparation.