The Untapped Information of the Epigenome | AIChE
Skip to main content

Where is information stored in humans? As engineers, we have accelerated our understanding of biology and our ability to harness it for biomedical and biotechnological applications by asking questions that provide a quantitative perspective of biological systems. We ask how much material and energy passes through metabolic pathways. We ask how much force is exerted on and by cells and tissues. We ask how strongly and how quickly genes are turned on and off in response to environmental and native signals. Correspondingly, we have developed genetic and protein tools, as well as biomaterials and fluidic devices, that can control these processes.

Although these questions are diverse, they share a common thread. We are ultimately asking how much information is stored in a biological system, where it resides, and how we can control and harness it.

One of the largest financial and human investments in biological research sought to characterize the information encoding us, through the sequencing of the human genome. A draft of the roughly 6 billion nucleic acids that make up the human genome was completed in 2003. It has been said that the human genome contains the equivalent of 1.5 gigabytes (GB) of information, as if each position within the DNA — which can be one of four nucleic acids — were represented by 2 bits of information (i.e., 00, 01, 10, 11). Yet, our intuition suggests that 1.5 GB, the size of many operating systems, computer games, and high-resolution movies, could not possibly encode the complexity of a human being. Our intuition is right. 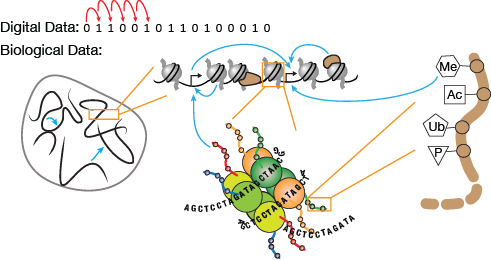 ▲Figure 1. Information in digital data is read linearly (red arrows) in a bit-by-bit fashion. Information in biological systems is highly nonlinear and exhibits a complexity of layered interactions, including intra- and inter-chromosomal interactions, gene-gene regulations, and proteins and histone modifications that control genes. The blue arrows represent both physical and regulatory interactions between different components of chromatin. Blue arrows pointing to black promoter arrows signify that the particular chromatin component or feature may regulate promoter activity and gene expression. The brown backbone is the n-terminal end of one of the histone proteins.

As it turns out, information in biological systems extends well beyond the linear sequence of four nucleic acids. Biological systems do not read and write information in the same linear, one-dimensional, bit-by-bit manner that traditional transistor-based computers do. Instead, many layers of information interact with each other nonlinearly (Figure 1). This is especially true in mammalian systems, where genomes have several important properties that greatly augment their information capacity:

Collectively, these features are known as the epigenome. We are still developing a deep and quantitative understanding of the information contained in the epigenome. Research shows that there are many opportunities to harness this information for biotechnological and biomedical purposes.

To synthetically control gene expression levels, a common strategy is to control the concentrations of proteins that bind the promoters of genes, and thus regulate their activation or repression. The epigenome provides additional...