A process at a British dye factory required addition of nitrosyl sulfuric acid (NSA) to a 600-gal (~2.3-m3) batch reactor containing an amine and sulfuric acid at 30–40°C. The manual feed to the reactor typically took about five hours to complete, and the resulting reaction was exothermic. This process had been in operation for many years without a problem until, in 1996, the batch reactor exploded. 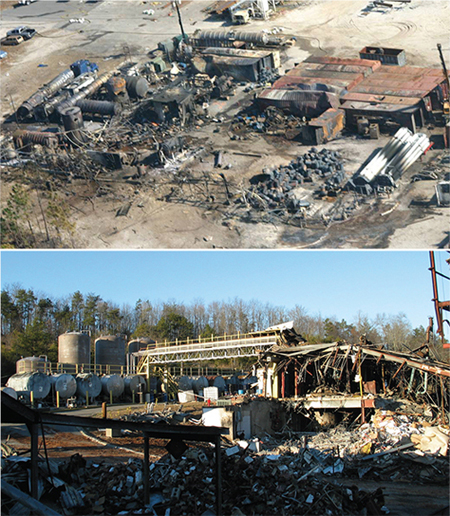 Initially, the batch was overheated to almost 50°C during NSA addition. The feed was stopped and the batch was cooled to 25°C (below the required temperature range). NSA addition resumed, and when complete, the batch temperature could not be controlled by the available cooling methods, exceeding the maximum temperature reportable by the temperature instrument. The runaway reaction overpressurized the reactor and it exploded. The explosion propelled the lower part of the reactor off its supports and onto the building floor. The reactor agitator landed on the roof, and the top of the reactor was thrown about 500 ft (150 m). Fortunately, no one was injured, but the accident cost the company £2 million.

A process that is too cool may not be safe!