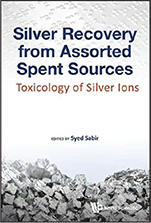 Silver holds three world records: it has the lowest contact resistance, the highest electrical conductivity, and the best thermal conductivity of all metals. The element’s physical strength, brilliance, and malleability make it useful in everything from electronics to optical applications.

A renewed interest in silver recovery has been motivated by economics and environmental concerns. It was recently discovered that, when divided to form particles at the nanoscale, silver takes on new properties, which has ushered in a new “silver rush.” Nevertheless, silver ions are also dangerous environmental pollutants, causing numerous diseases and disorders in the marine, microbial, invertebrate, and vertebrate communities.

This book describes the advanced technologies used for silver recovery and recycling from spent sources. It covers various aspects of hydrometallurgical and biometallurgical processing of silver, including leaching and cementing, as well as relevant reducing agents, adsorbents, and biosorbents.

Life on Mars: What to Know Before We Go 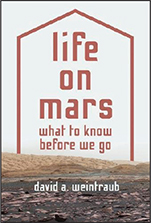 Does life exist on Mars? The question has captivated humans for centuries but, today, answering it has taken on new urgency. NASA plans to send astronauts to the planet by the 2030s, SpaceX wants to go by 2024, and Mars One wants to land a permanent settlement there by 2032. Missions like these require us to think deeply about what kinds of life may already inhabit the planet and whether we have the right to invite ourselves.

This book tells the complete story of the quest to find out whether life does indeed exist on Mars. It explains why, of all the planets, Mars has beckoned to us the most, and traces how landers and rovers, terrestrial and Mars-orbiting telescopes, spectroscopy, and a Martian meteorite have refined our idea of Mars. The book posits that DNA-based life on Mars could offer clues about our distant evolutionary past, and grapples with the moral and ethical questions of introducing...