As engineers working in the chemical process industries (CPI), our mantra is to find ways of making things “faster, better, cheaper.” This expression is well-known and was used often by Daniel Goldin, administrator of the National Aeronautics and Space Administration (NASA) from 1992 to 2001. To clarify, faster means more output in a defined time period (or the same output in less time); better means improved safety, quality, and sustainability; and cheaper means at lower capital and operating cost.

One approach to process intensification is to look for contradictions within the chemical process (2). A contradiction occurs when one action produces a useful result but also a harmful effect. For example, a chemical reaction may proceed at a higher rate if the temperature is increased, but the higher temperature also produces more unwanted byproducts.

Genrich Altshuller, an engineer in the former Soviet Union, studied contradictions extensively during the 1940s. In his studies, Altshuller observed that processes of many kinds were fundamentally limited by contradictions. This is because a contradiction implies a compromise. In a chemical reaction, the incremental value of the additional product obtained as a result of a slight temperature increase could more than compensate for the lower yield caused by producing more unwanted byproducts. Further temperature increases would reach a point of diminishing returns, where the temperature increase diminishes value. In such cases, engineers use an approach like Six Sigma to find the optimum operating point, a compromise between the benefits and harm of increasing temperature. If the compromise is avoided (e.g., an increase in temperature would not detract from the yield), the contradiction is resolved.

During World War II, labor, materials, and component parts were scarce and delays in manufacturing were common. Lawrence Miles, Jerry Leftow, and Harry Erlicher, engineers at General Electric (GE), recognized that substitutes could be used as long as the substitute performed essentially the same function as the original. In other words, it is not important what something is but rather what it does. This became known as function analysis.

Charles Bytheway, another GE engineer, developed a graphical technique to map the functions in a system and show their relationships. Bytheway’s approach is called the function analysis system technique (FAST). FAST diagrams show how, why, and when processes occur in a system (3). 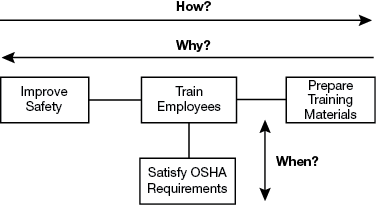 ▲Figure 1. This sample FAST diagram describes the how, why, and when relationships associated with the primary function “improve safety.”

Examine each function and ask: When this function is performed, are there any consequential functions? In this case, when you train employees, you satisfy U.S. Occupational Safety and Health Administration (OSHA) requirements.