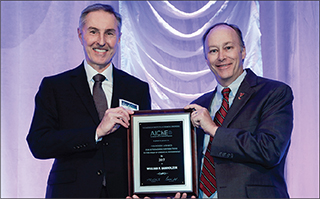 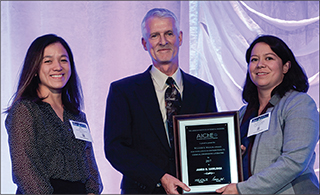 ▲ James B. Rawling (center) of the Univ. of Wisconsin, received the William H. Walker Award for Chemical Engineering Literature. On hand for the presentation were Awards Selection Subcommittee Chair Rachel Segalman (right) and Mia Ricci (left) of Wiley, the award’s sponsor. 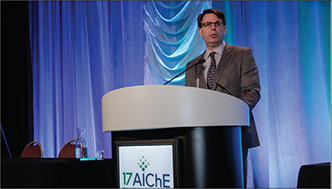 ▲ The Andreas Acrivos Professional Progress Award Lecture was presented on Oct. 31 by the 2016 Acrivos Award recipient, Christopher Jones of Georgia Tech. His lecture was entitled “Engineering Amine-Modified Silicates for CO2 Separations and Catalysis.” 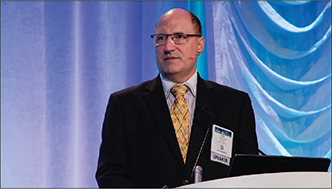 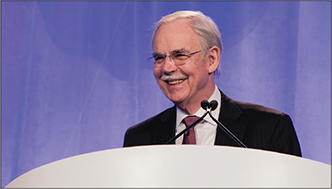 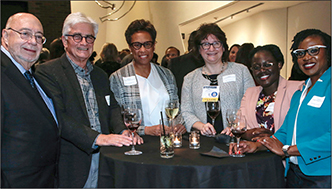 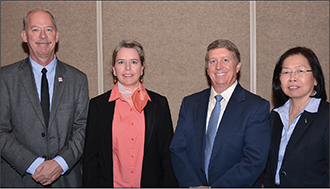 ▲ On Oct. 31, a new Annual Meeting plenary — “Diversity and Inclusion: Starting and Thriving in the Workplace” — demonstrated how organizations reap the benefits of an inclusive workforce....

The innovative endeavors of chemical engineers across specializations were on tap at the 2017 AIChE Annual Meeting, Oct. 29–Nov. 3, in Minneapolis, MN. More than 5,600 delegates from 54 countries attended the conference, which offered more than 780 sessions across 23 program tracks. New topical conferences explored next-gen manufacturing, microbiomes and microbial communities, thermal destruction of biomass, and NH3’s role in sustainable energy and agriculture. The meeting expanded its coverage of topics including 3D manufacturing, process intensification, the food-water-energy nexus, and chemical engineers in medicine. The meeting also explored developments in bioengineering, fuels, sustainable energy, education, nanotechnology, particle technology, environmental engineering, and more. The Institute’s work to advance the diversity and inclusiveness of the profession highlighted a new plenary, a reception for LGBTQ engineers and allies, and sessions organized by AIChE’s ChEs with Disabilities Forum, Minority Affairs Committee, and Women’s Initiatives Committee. News, photos, and videos from the meeting are available on AIChE’s ChEnected blog (www.aiche.org/chenected). 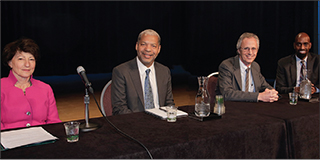 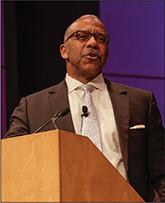 ▲ Kicking off the Student Conference, Bernard Harris, Jr., CEO of Vesalius Ventures and a former NASA astronaut, inspired the capacity crowd with his keynote address on Oct. 28. 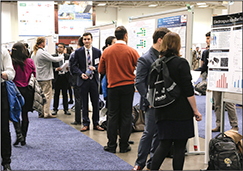 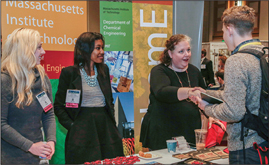 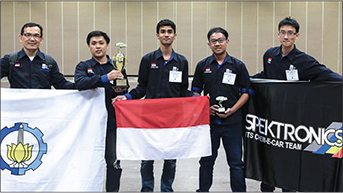 ▲ Team Spektronics from Institut Teknologi Sepuluh Nopember (Indonesia) won first prize in the performance competition. The car, powered by the decomposition of hydrogen peroxide, carried its payload of 157 mL of water and stopped only 2 cm from the 23.5-m target distance. Teams from Univ. of California, Irvine, and Univ. of North Alabama finished in second and third place, respectively. The $2,000 first prize was sponsored by Chevron. 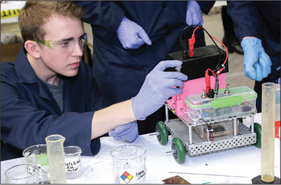 ▲ The Cu L8r team from Trine Univ. powers up in the pit area. 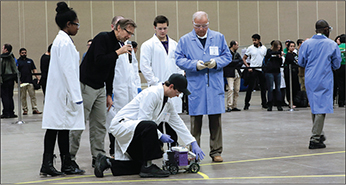 ▲ The team from Univ. of North Alabama shoots for the moon as it launches LUNA on her trajectory.