As the worldwide price of solar photovoltaic (PV) energy decreases, a growing amount of consumers are adopting PV technologies. In 2016, the levelized cost of electricity (LCOE) for domestic utility-scale solar power reached $0.07/kWh, which is competitive with the cost of coal-generated power. However, the current cost of residential solar power remains at $0.18/kWh, which has prevented broader adoption of solar power.

The U.S. Dept. of Energy’s SunShot Initiative has set reduced price targets for solar power by the year 2030: $0.03/kWh for utility-scale and $0.05/kWh for residential-scale PV. To reach these goals, all sources of module output losses must be significantly reduced. 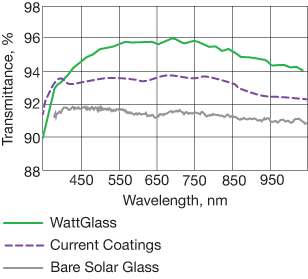 The front cover glass of a PV module often limits the module’s energy output and efficiency because the glass reflects almost 4% of incident light. All commercial PV modules employ an antireflective (AR) coating to mitigate reflection losses. These coatings are typically synthesized using acid-catalyzed sol-gel chemistry, which is inherently difficult to control and requires large quantities of hazardous chemicals.

To address these issues, WattGlass, a National Science Foundation (NSF)-funded technology startup, has developed a novel water-based multifunctional AR coating with anti-soiling properties. The WattGlass coating, which was spun off of CEO Corey Thompson’s PhD research at the Univ. of Arkansas, is composed of a porous silica nanoparticle layer with an inorganic binder. The technology can decrease LCOE by up to 6% for utility-scale solar power.

The coating meets all relevant International Electrotechnical Commission (IEC) requirements for solar PV coatings. WattGlass’ novel coating is deposited, using standard industry processes, with thicknesses between 100–150 nm and indices of refraction that are optimally tuned for low-iron-float and solar glass.

In addition, the WattGlass coating uses a superhydrophilic, or water-loving, surface chemistry that spreads water into a thin, transparent sheet that carries contaminants away. The superhydrophilicity also prevents discrete water droplets, which could fog up the surface, from forming on the coating surface. The high-surface-energy coating also modifies the way that contaminants interact with the coating surface to reduce particulate soiling. So far, laboratory and field tests have demonstrated that the WattGlass coating reduces transmittance losses from environmental soiling by nearly seven-fold compared to bare glass. This capability is especially beneficial in arid climates, such as those found in the Middle East, where soiling can reduce expected power generation by up to 40%.

WattGlass has successfully scaled its coating technology from a low-throughput, lab-scale dip-coating to an industry-standard roll-coating process. The water-based chemistry features a slower evaporation rate than alcohol-based processes, enabling better process control. In addition, the WattGlass coating’s performance far exceeds that of competing water-based coatings. Its water-based chemistry also makes it less hazardous to use and produce than traditional sol-gel AR coatings.

WattGlass is partnering with several companies to help speed up adoption of its AR coating. Leveraging NSF-funded research, the company recently closed a Series-A investment with DSM Venturing. WattGlass has also recently partnered with Yingli to further test the coating for solar applications. By the Spring of 2018, WattGlass plans to deploy a 60-kW PV module test bed to evaluate the coating.