Considering that scientists have been engineering plants for more than 30 years (the first genetically engineered [GE] plants were produced in 1982), and that plant genetic engineering has enhanced row crop commodities in much of the globe, it is surprising that we are still using some of the earliest-developed tools to control transgene expression in plants.

In the plug-and-play world of genetic engineering, if we want a crop to produce a new protein and trait, such as one that kills certain insect pests, we add a new gene to the crop’s genome. For example, the GE corn and cotton grown all over the world typically contain a single added gene from Bacillus thuringiensis (Bt), which encodes a protein that is toxic to a narrow taxonomic range of insect pests.

One goal that genetic engineers are working toward is limiting Bt gene expression to only the crop tissues that are the target of the pests. For example, the cotton bollworm chiefly damages the fruits of the cotton plant (i.e., the bolls). Technically, the Bt gene needs to be expressed only late in the season and only in the bolls. However, the Bt gene used in cotton, and nearly all GE crops, is expressed in nearly all tissues all the time.

Using a transportation design analogy, many of the first automotive components, such as brakes, were co-opted from horse-drawn carriage technology. A lever-activated shoe applied friction to each wheel, thereby slowing the wheel and the vehicle. When vehicles were underpowered (one or two horsepower) and roads were rough, this simple technology was effective.

By the 1930s (when vehicles had tens of horsepower), hydraulic brake systems became widely adopted because they gave more force to the brake shoes, which by then were applying force to wheel drums. By the 1960s and 1970s (when vehicles had a few hundred horsepower), dual master cylinders provided more-precise control over front and rear wheels. Subsequently, disc systems, which are much more effective than drum brakes, were adopted — first for front wheels and later for rear wheels as well.

As engine power and vehicle weight increased, the systems required to slow down and stop the vehicle became more sophisticated and powerful. The current gene expression systems engineered into commercial transgenic crops are akin to the horse-and-buggy brake technologies. 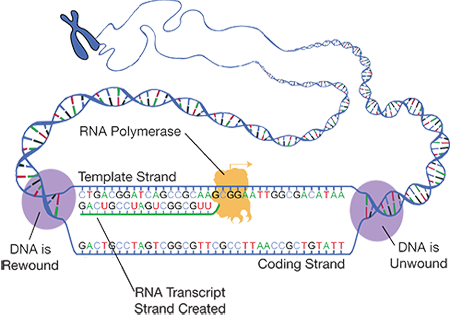 ▲Figure 1. Gene transcription is the production of RNA from the DNA template strand in the presence of the enzymatic RNA polymerase complex in the nucleus. The RNA polymerase adds nucleotides to the growing RNA strand, which is reverse-complementary to the DNA template strand but identical to the coding strand (except that the base thymine in DNA is replaced by uracil in the RNA strand). Source: National Human Genome Research Institute.

Gene expression control in plants is very similar to that of other higher organisms, such as humans, animals, fungi, yeast, and insects. Each gene has its own promoter that works in concert with proteins called transcription factors to control the first part of gene expression: transcription (Figure 1).

In nearly all commercialized transgenic plants, transcription of the transgene is under the control of a strong constitutive promoter such as the cauliflower mosaic virus 35S promoter or the ubiquitin 1 (ubi1) promoter from corn. Both of these promoters were cloned and characterized in the 1980s and 1990s (1, 2), concurrently with the invention of the main plant transformation technologies used today. These two promoters, along with a few others, have been the workhorses of simple gene expression in GE crops.

As the demand for complex metabolic engineering grows, researchers will need more promoters. For example, if scientists want to install multiple novel genes into plants for the biosynthesis of new chemicals, multiple promoters will be required. There are several reasons...