Our goal at the Center for Synthetic Biology at the Univ. of Copenhagen (http://synbio.ku.dk/bio-synergy/) is to engineer chloroplasts into effective light-driven production units for high-value bioactive natural products, such as structurally complex diterpenoids. 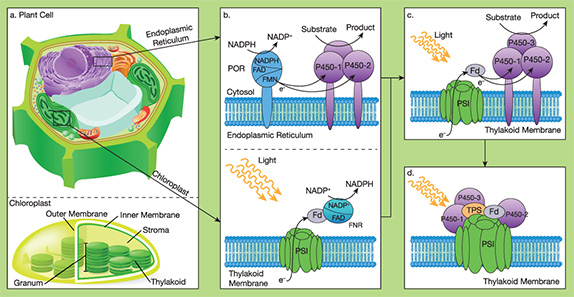 ▲Figure 1. This figure represents the overall research strategy for light-driven synthesis of bioactive natural compounds in the chloroplast. a. In a plant cell, photosynthesis takes place in the chloroplast. Bioactive natural products, such as diterpenoids, are synthesized in the endoplasmic reticulum (ER). b. The ER harbors the cytochrome P450 enzymes that catalyze key steps in the synthesis of most bioactive natural products (top). The photosystem I (PSI) reaction complex, which uses light to generate energy and reducing power, is part of photosynthesis and takes place in the chloroplast thylakoids (bottom). c. Two biosynthetic complexes are assembled in the thylakoid membrane to initiate solar-driven synthesis of natural products. d. A supra-molecular complex is constructed by incorporating the globular domains of the cytochrome P450 enzymes and terpenoid synthases as integral parts of the photo-system I complex.

The synthesis of most bioactive natural products involves biosynthetic steps catalyzed by cytochrome P450 enzymes. We have achieved the rerouting of such entire biosynthetic pathways into the chloroplast (Figure 1). The chloroplast is an ideal production unit for diterpenoids, some of which are known anti-cancer, anti-inflammatory, and antimicrobial compounds, because it is the site of synthesis of their universal precursor, geranyl-geranyl diphosphate. This article outlines the advances made in identifying and characterizing genes and enzymes involved in the biosynthesis of complex diterpenoids, and discusses the drugs forskolin and ingenol-3-angelate as examples to illustrate the concepts.

More than 50,000 terpenoids have been detected in plants, making terpenoids the richest repository for chemicals with a wide range of bioactivities. Combinatorial biochemistry offers a means to further augment this diversity. The ultimate goal of using synthetic biology within this research area is to design a plug-and-play template-based production system that, on a long-term basis, can contribute to production of otherwise extremely costly medicinal compounds. This article also illustrates how solar energy, in combination with the approaches of synthetic biology, may possibly help us to provide science-based solutions to some of the global challenges society faces and help drive our efforts to move toward a bio-based society.

The Center for Synthetic Biology defines synthetic biology as the engineering of biology to produce biological components, systems, cells, and organisms that address society’s needs and are desired by the general public. The aim of synthetic biology is to mimic the principles of nature to develop biological systems with desired new properties.

Cell function is dependent on the self-assembly and coherent interaction of numerous biological modules, with the output from one module serving as input to the next. Modules introduced by researchers to establish new desired functional interphases need to adhere to this principle. By combining biology and engineering, we rely on the principles of nature to construct biological systems with new properties, taking a semi-open approach to knowledge development based on the sharing of biological parts. Open sharing of ideas and knowledge will advance the implementation of synthetic biology.

The many global challenges related to fossil fuels, climate change, food security, environmental preservation, and financial inequality are well known. Overcoming these challenges, and transitioning to a bio-based society, will require interdisciplinary research and development, marketing of new and innovative products manufactured using renewable resources, and novel green technologies that are economical and have transformative power.

The aim is to develop disruptive innovation steps that offer new industries a clear, competitive edge. Synthetic biology is gaining recognition as one such transformative technology.

Plants as the world champions of complex chemistry

Animals have a simple means to confront the challenges of their environment, such as lack of food, harsh climatic conditions, or threats from predators or diseases — they move! Plants, on the other hand, are sessile organisms and have been forced to evolve much more elaborate solutions to the very same challenges.

One adaptive technique of plants is to synthesize an array of structurally complex bioactive natural products with specialized roles. Examples of such specialized molecules include sunscreens to protect against ultraviolet radiation, epicuticular waxes to prevent water loss during periods of drought, and flower pigments to attract pollinators.

However, the greatest chemical complexity executed by plants is reserved for synthesis of toxic defense compounds (bioactive natural products), which plants deploy to deter herbivores and pests. The biotic challenges are constantly changing; plants, insects, and pests have engaged in a chemical arms race of adaption and counteradaption for over 350 million years (1, 2). As a result, plants have become the world champions in carrying out complex chemistry and creating chemical structures. Many of these compounds are used as highly valuable colorants, flavors in foods, or medicinal drugs.

In general, plants produce these complex bioactive natural products at a sluggish rate, and typically produce them only when it is beneficial for growth and development, when they need to fend off herbivores or pests, or when they want to attract pollinators. Continuous production of a multitude of defense compounds in significant amounts may slow plant growth, because their biosynthesis and storage consumes carbon, nitrogen, and energy that would otherwise be used for growth, making it more difficult for the plant to compete with neighboring plants for access to light. However, in the course of evolution, bioactive natural products have acquired additional functions, such as serving as storage forms of sugar, reduced nitrogen, or sulfur (3). Accordingly, plants tend to produce as little of these compounds as required to obtain the optimal combination of effects.

Through evolution, energy generation (based on solar radiation) and biosynthetic capacities have been compartmentalized in the chloroplast and the endoplasmic reticulum (ER), respectively (Figure 1a). The tight control of the synthesis of bioactive natural products in plants may perhaps be traced back to the evolutionary origin of the plant cell (4, 5). Photo synthetic bacteria and cyanobacteria arose some 2.7–3.5 billion years ago. Primitive land plants developed around 475 million years ago. Scientists theorize that mitochondria originated from a free-living micro-organism that was engulfed by a primitive cell. Subsequent engulfment of a photosynthetic cyanobacterium originated the chloroplast.

Energy supply via photosynthesis was thus superimposed on a pre-established set of primary metabolic reactions in which energy was generated by the oxidation of chemical compounds present in the environment (i.e., chemoautotrophy). Within the plant cell, the formation and turnover of carbohydrates were separated as a means to control the channeling of the energy flux and carbon into primary metabolism for growth, development, and defense...