For decades, plant biologists have sought the means to manipulate plant genomes in a targeted and simple manner. Although some of the first experiments to develop these technologies were carried out more than a century ago (1), we are in a new renaissance of scientific advancements and renewed interest in improving tools for plant engineering. 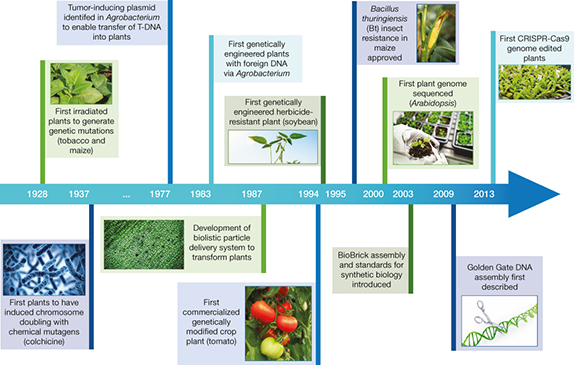 ▲Figure 1. Agricultural and technological advances throughout the 20th century influenced the plant synthetic biology tools of the 21st century.

Plant synthetic biology is in its infancy, lagging behind its microbial counterparts primarily due to the technical challenges of working with plants, as well as a disconnect between synthetic biologists and the plant biology community. The plant synthetic biology technologies that exist today are the result of decades of research and scientific advances (Figure 1). This article outlines a brief history of modern agricultural advances to explain how these historical events have laid the foundation for the current renaissance in plant engineering.

Modern breeding and agricultural biotechnology can be broadly summed up by two overarching processes: mutagenesis and transgenesis. 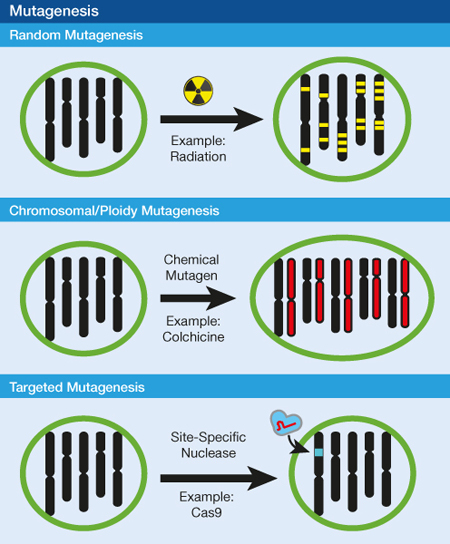 ▲Figure 2. There are two overarching methods of modifying plant genomes: mutagenesis and transgenesis. In random mutagenesis, radiation can induce multiple random mutations (yellow) across all chromosomes in the plant nucleus. Chromosomal or ploidy mutations are induced by chemical mutagens and can increase the copies of chromosomes (red). Targeted mutagenesis approaches via site--specific nucleases, like Cas9, can be utilized to produce direct mutagenesis of single loci (blue) in plant genomes.

Some of the earliest agricultural goals were to devise technologies that would affect the genetics and heredity of plants via external treatments. In 1928, researchers demonstrated for the first time that X-rays could induce mutations in DNA and alter traits in tobacco and maize plants (2, 3). Before that, plant breeding efforts were limited to traits and variations found in nature; the ability to induce mutations enabled biologists to produce variation at their will (Figure 2).

Mutagenesis was sold as a technology capable of creating new varieties and even new species that could be used to address any agricultural trait of interest. For the next half-decade, scientists used X-rays and neutron bombardment to induce mutations and screen for mutants of interest. Although the original hope was to find mutants that had agricultural benefits (e.g., pathogen resistance, drought tolerance, etc.), few of these were found. Interesting new varieties were discovered that could be marketed for novelty rather than practical, agricultural uses. For example, researchers used radiation mutagenesis in grapefruit orchards and discovered a new grapefruit variant that had red flesh instead of the traditional white flesh — they had identified ruby grapefruits.

Researchers later discovered that chemical mutagens could also be used to mutagenize plant genomes. Certain chemical compounds could induce nucleotide-level mutations (e.g., ethyl methanesulfonate) or even chromosomal mutations (e.g., colchicine) that would affect the ploidy (i.e., the number of chromosome sets) of the plant. By increasing the number of chromosomes in plants, many interesting ornamental plants were discovered, such as new varieties of marigolds, lilies, and snapdragons. Beginning in the 1940s, many of these varieties were commercially sold and marketed by seed companies as novelties that were created using chemicals (1).

The excitement surrounding these new mutagenesis techniques invigorated the scientific community. Researchers hoped that these approaches could be used to investigate the genetic basis for plant phenotypes. These advances also stoked the enthusiasm of home gardeners, who wanted to learn how to leverage these new technological advances. To that end, home gardeners began purchasing and utilizing mutagens, such as colchicine, to try to create homegrown mutant varieties of their own personal plants. In an era when technological advances were just beginning to enable scientists to understand the genetic basis and underpinnings of life, it is remarkable that nonscientists not only supported that research, but also wanted to participate in manipulating plant genomes.

The hope was that chromosomal and ploidy mutagenesis would be adopted as a revolutionary agricultural breeding practice. However, like X-ray mutagenesis, mutants resulting from chemical mutagens did not yield agricultural improvements for many crop species. Therefore, traditional breeding methods continued to dominate as the main approach for generating commercially relevant varieties. Although these early techniques created few agriculturally relevant varieties of crop plants, these methodologies became invaluable tools in basic plant biology research, as they have generated countless mutant libraries that have been instrumental to our understanding of basic plant genetics. 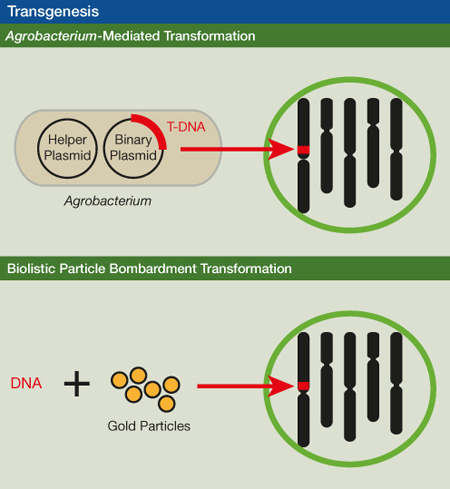 In the 1980s, an entirely new method of modifying plants, called transgenesis, was developed (Figure 3). Although mutagenesis did not quite deliver on the promise of improving agricultural crops, transgenesis opened the door to modern plant molecular biology.